A bumper crop of shite this week as Sean "Keanu Grieves" Hanson finds the hateful sequel to the hateful Clash of the Titans to be hateful; Joseph "Jay Dub" Wade begs the question of just what is the fairest film of them all; Ian "Professor Clumsy" Maddison rather enjoys setting sail with The Pirates!; and Martin R. "Vargo" Schneider plays catch-up with Rampart and October Baby.

Wrath of the Titans

EXPECTATIONS: I have a vague recollection of enjoying the 2010 remake of Clash of the Titans despite not knowing, for the life of me, precisely what happened during its 106-minute runtime. While the details are foggy, I know this much: It's hard to dislike any movie that unites Liam Neeson, Ralph Fiennes and the Kraken. And though director Louis Leterrier and the Clash of the Titans screenwriters abandoned ship for the sequel, I'm expecting at least more of the same. After all, Warner Bros. threw $150 million at Wrath of the Titans and greenlit a franchise deal. 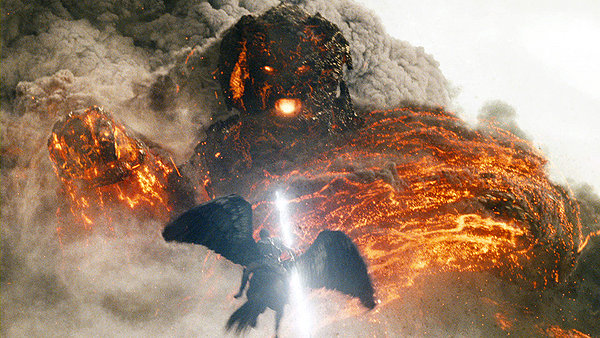 Wrath of the Titans picks up a decade after its predecessor, and Perseus (Sam Worthington) is still boring as shit, a blank-faced avatar (get it?) onto which we're supposed to project our own image of what a hero should be. His father Zeus (Oskar Schindler) descends from Olympus to ask for his help yet again -- this time, to secure the underworld prison Tartarus because demigod prison guards are on strike again (welcome to Obamaville, hippie) -- before becoming a prisoner himself due to Hades' (Amon Goeth) betrayal.

This is all, of course, a platform to explore as many daddy issues as one film could explore without subjecting audiences to all 53 minutes of "Cat's in the Cradle." For a film about manly Greeks doing manly Greek things (absent the buttfucking), these gods and demigods spend an inordinate time crying about their daddies. The most conspicuous victim of this tendency is the villain Ares (Édgar Ramírez), who drowns his daddy issues in liquid eyeliner and sports a lispy Venezuelan accent to set him apart from a cast otherwise dominated by gravelly Anglos. You'd expect the producers to spend some of that budget on a screenplay free of clichés, but Ares is the classic homosexual villain, whose sexuality is never explicitly addressed but whose villainy is defined by general effeminacy. 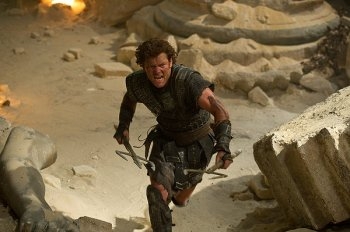 I suspect the filmmakers were attempting a throwback to the 1981 original, but somewhere along the way they stumbled and ended up with a Xena episode by way of a high school production of Godspell, with a coat of questionable CGI. During the climactic fight scene, I shouldn't be distracted by the sheer number of inexplicable sparks or Greek pillars built with Styrofoam.

Beyond the gaudy cheapness of the whole affair is a jarring disregard for cinematic conventions. There's nothing new or groundbreaking about Wrath of the Titans -- this ain't Art -- but there's so much going on in any given frame without much distance between the foreground and background, director Jonathan Liebesman forces the audience to play a rather uncomfortable game called Guess Just What the Fuck's Happening. I've seen zoetropes that were more compelling than the nauseating mess of color and motion that is Wrath of the Titans.

But, hey, apparently filmgoers are into that nowadays. Who needs a clever plot or three-dimensional characters when they get in the way of nonstop violence?

MINORITY REPORT: They told me 'no one wants to hear a hard rock cover of Sweet Dreams.' I told them, 'Every action movie trailer for the next ten years does.' Looks like Manson wins again. - Marilyn Manson