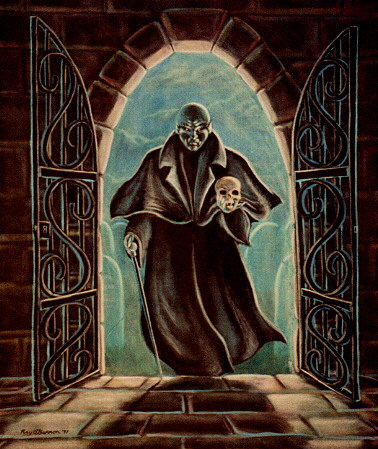 Lowtax:: "Is it too late? It's too late, isn't it? I can come back tomorrow. Really, it's no problem"

Zack: "You said bring something, I didn't know what to bring, so I just picked up a skull. Do you have a skull? I bet everyone brought a skull."

Lowtax:: Destro gets a job with UPS.

Lowtax:: I love the fashionable dollar-sign gates. Either he's delivering a skull to 50 Cent or Scrooge McDuck

Lowtax:: He fought wars for skulls, you know.

Lowtax:: "No blood for oil," but "lots of blood for skulls. Bitch."

Zack: Next to empty water bottles, I would think skulls would be one of the easiest things to procure, but you really don't see skull piles like you used to.

Lowtax:: UPS Destro is clearly floating, so what's the use of the walking cane?

Lowtax:: Is that some new hipster fad?

Zack: They used to cover everything with skulls, but no in modern society you just put them in the trash and we forget what we're doing to the environment with all our skulls.

Zack: Maybe he's blind. Oh, that could be a companion skull.

Zack: Or a working skull.

Zack: The skeletons prance angrily out of the his performance like bearded Muslims at a Jeff Dunham show. "Not cool, bro. Notttt. Coolll."