Wednesday, Aug 16, 2000 by Rich "Lowtax" Kyanka (@TwitterHasBannedAllMyAccountsEver)
Most people consider driving merely a way to get from point A to point B, just another boring method of transportation. As I've proved countless times on this site, most people are stupid. Driving represents an externalization of the ultimate conflict which rages inside every human being, the need to fully realize who we are and where we are going in our lives. It is an expressive action which opens up a window to every persons' soul, revealing their inner desires and a shockingly accurate representation of their true nature. Actually, now that I think about it, I guess driving really is just another boring method of transportation. My mistake.

Chapter One: Know Your Enemies!

Before actually getting in your car and going somewhere, you should become familiar with the various people who inhabit the highways and byways of America, the individuals whose sole purpose on Earth is to congest the roadway ahead of your vehicle and cause you to get into a fiery hellish inferno of destruction. These enemies come in a variety of different forms, spanning every ethnic and physical description possible. Every class of driver has their own distinct "Sphere of Awareness" factor, a measurement which describes exactly how aware of their surrounding environment these people are. Study the following guide and become well versed on each group. It just may save your life. 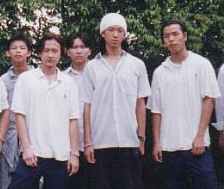 SPHERE OF AWARENESS: Miles, as they're continuously scanning the horizon for rival Homeboyz, potential dating material, and anybody with a louder stereo system than theirs.
CHANCES OF ENCOUNTER: High
AVERAGE SPEED: Below the speed limit
DRIVING STYLE: Aggressive
DESCRIPTION: There are four primary types of Homeboyz to be aware of: white, black, Hispanic, and Asian. Other groups, such as the Icelandic Homeboyz and the Norwegian Homeboyz, probably exist, but don't have such a strong presence. The Homeboyz can be easily spotted thanks to an early warning detection system known as "sticking your head outside the window." If you hear a faint, repetitious thumping noise, you can be almost sure that a Homeboy is somewhere within a 15 mile radius of your automobile. Homeboyz vehicles are notorious for going against the "traditional" vehicle cost structure (how the majority of the money invested in the vehicle is spent) which is as follows:

Instead, the cost structure for Homeboyz cars is as follows:

The actual cost of the car ranks somewhere around 158th place, right below "crown-shaped air freshener". As a result, you will see many Homeboyz driving around in "souped up" (read as: "has car doors from a totally different vehicle") cars like stolen and recently impounded Hondas. Despite having an above average Sphere of Awareness, Homeboyz are usually reclined back in their seats to the point where the top of their forehead is well below the dashboard. Many scientists studying the habits of Homeboyz were at a loss to explain how they were able to see their surroundings through the metal and plastic of the car, at least until Dr. Rex Mendoza was able to capture a Homeboy-mobile and examine the interior. He was surprised to learn that Homeboyz have actually evolved to their driving style, featuring something dubbed a "Homeboy Periscope" which allows them to see the road in front of their car while being submerged up to five feet below the dashboard. If you encounter a Homeboy, do NOT under any circumstances look in its general direction, as the glare from all the chrome of the vehicle and the 10 cubic tons of imitation gold around their necks will instantly blind you.