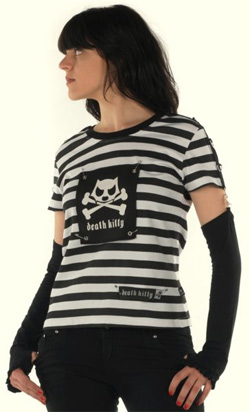 Do you remember emo people? Back around 2002 to 2004 they listened to emo bands with names that all seemed like really bad things to do like "Jimmy Eat World", "Panic! At the Disco," "Swim After Dinner" and "Fetishize Your Mother's Clothing." Their songs were about the important stuff, like being bored, living in suburbia and parents just not understanding.

Fortunately, through a ruthless program of forced sterilization, government officials managed to prevent the breeding of emos in North America (other than a few pockets in Montreal) and effectively eliminated their species from the wild.

It seems at first glance that Iraq was not so fortunate. After surviving war and brutal sectarian violence, the unlucky inhabitants of Baghdad's Sadr City neighborhood now find themselves beset by dangerous levels of introspection. The emos seem to have come to Baghdad. And they are way more intense than the emos ever were in America.

"I saw them a couple weeks ago ... a bunch of girls, high-school aged, walking together, dressed in black. They had long black eye makeup and bracelets with skulls and chains on their handbags with skulls," said Abdullah, 31.

"If they are close friends who have something in common, that's all right. If other things we hear about them are true, like sucking each other's blood or worshipping the devil, that is not accepted in our society. But I think this is just a trend to imitate the West."

Buddy, hold on there, I get the skulls all over their bags and the My Chemical Haircuts, but emos in "Tha West" do not suck blood and worship the devil. The interior ministry of Iraq similarly addressed the emo crisis in Baghdad, releasing a statement that emo is "Satanism."

An anti-emo leaflet was circulated in Sadr City by religious extremists.

"We strongly warn you, to all the obscene males and females, if you will not leave this filthy work within four days the punishment of God will descend upon you at the hand of the Mujahideen," the leaflet said. 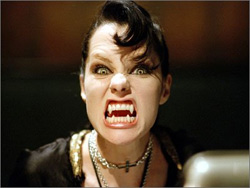 The "hand of the Mujahideen" turned out to literally mean "the rock and brick of the Mujahideen" which descended on a number of youths in Sadr City, killing 14 and hospitalizing many more. The blogs are going on and on about religious fanatics and homophobia, condemning this new wave of intolerant violence, but I condemn it for a different reason.

Based on the information available, the Mujahideen are not facing emo teens. This isn't some little emo nest. They are facing vampires. A full-on infestation. And you can't kill vampires with bricks.