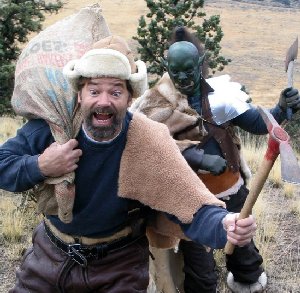 With Election Day coming up in a few days it's easy to lose sight of the more important subjects that concern us, such as the flu vaccine, fantasy football, Chufflebells, and video game animal abuse. Today we are going to talk about the latter, for it has been a plague on the gaming community and society as a whole with no end in sight. Pixel by pixel, these innocent electronic beasts of fancy have been all but wiped out by ignorant and carelessly violent games. That's why in 1992 I started PETVGA, an offshoot off the large animal rights group, PETA. It stands for People for the Ethical Treatment of Video Game Animals, and our organization is growing larger every day. Granted, the first 10 years of the organization was extremely rough at times, mostly because of the mocking reception we receive when people first hear the idea, and the fact that the club was just myself and my half-brother Sir Gregory VI. Even though my commitment to the group has cost me my job, marriage, and my ability to leave the state without contacting my parole officer, it has all been worth it.

When I try to expand the minds of those who come across my path, whether at the grocery store or in their bedroom at night, I present a case of abuse with a collage of graphic screenshots from various games where animals are slaughtered wholesale. I hate to resort to shock tactics, but this is the truth we are fighting against, and we must face it, no matter how ugly. Much to my disappointment, most folks do not respond well to my presentation and usually say, "Get out of my way I just want to buy some pears", or "How did you get into my home? Oh God, please don't kill me". I like to think this is not due to the lack of conviction that I present my damning case against the gaming industry and its users, but rather the overbearing guilt that these people cannot face and seek to lash out against me by shooting buckshot into my backside while I make a hasty retreat out the window. These are just some of the dangers you face when you stand up for what's right against the giants of the gaming industry.

So what can we do about it? Sir Gregory VI (who is really a talking mouse), and I came up with a really clever acronym for that one night after doing a "presentation" in the home of an attractive young professional and basking in the afterglow. We call it LSBI, which stands for learning, sharing, boycotting, and ice cream. If you follow these four steps in order then it is only a matter of time until enough of the public is involved against this terrible video game animal abuse to make a difference. Please take these steps seriously, for if you transpose the order of them and decide to eat ice cream before learning, in seven days Sir Gregory VI will come out of your TV set and devour your soul along with all your cheese. The most important of the four steps is the boycotting. If we can single out the worst offenders of the video game industry, our refusal to buy the games until they change their cruel code is the strongest weapon we have against them. I have a list of five of the cruelest video games for you to distribute to your friends and family. I also have a list of 147 known Communists but I'll save that for a rainy day. 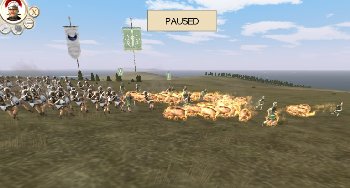 This game released by Activision is the third in a series of strategy war games that are extremely popular with young men and pedophiles. While it is common knowledge that animals were used in ancient combat, such ideas should not be tolerated or glorified in fun or entertaining way. In this game you can recruit horsies, elephants, wardogs, and an absolutely appalling unit called "incendiary pigs". The pigs are covered in pitch, tar, and oil and then set ablaze to run frantically into the enemy ranks. I can't even look at this screenshot without trembling with anger that these game designers would create something this cruel to do to a poor digital piglet. Pigs are known to be the most noble and carefree beasts that ever roamed the planet, and setting them ablaze to make a few bucks is not just morally wrong, but an act of electronic terrorism. I would like to kidnap all the board members at Activision and ride them into battle, set them on fire, and molest them at the lonely Roman camp to see how they like the life of an animal in their game. Please do not buy this game and add to the bloated coffers of these war profiteers so they can snort coke off a young Cambodian boy, or whatever game designers do with their money.

The three worst offenders out of this genre of games called MMORPGs, or Massive nerds Mining Ore and Running from Pudgy Gnomes, are Ultima Online, Star Wars Galaxies, and the Everquest games. In these online games, the goal is to horde as much money and possessions as possible, any way you possibly can. As a result, the beasts of these worlds suffer tremendously at the hands of these "adventures" that spend hours chasing around the poor animals to harvest their hides and flesh. Most of the time the newbie players have such a poor skill level at making boots that they can go through 100 animals just for one pair. This is the sort of ignorance that makes me vomit in disgust and then slip on the vomit, falling down a flight of stairs and breaking my hip at the bottom of the stairwell where I lay for a week in my own filth before somebody finds me and steals my wallet. The nerdiest and saddest gamers often play these games, and as such they care not for the suffering of creatures, but only their +2 gloves of Elf Tomfoolery or skill points so they can dance in a cantina for 10 hours. Please boycott these games as well as Snackwell cookies because I ate a bad one last week and was on the shitter for like, 2-3 hours.

The electronic animals have no vocal cords or any way to protect themselves. It's up to us at PETVA to stand up for them, and maybe take them out to a dinner and a movie. If you are very lonely and would like to help these mistreated electronic beasts, please send me a email to join our organization. To accept you as a member I need a written recommendation, your social security number, a hair follicle sample, a quick bj, and a short paragraph on how we can make peace in the Middle East. Also Sir Gregory would like to make a nest in your ear cavity so you serve as a host to his spawn that will slowly take over the world, one soul at a time. Don't struggle, it's easier that way. 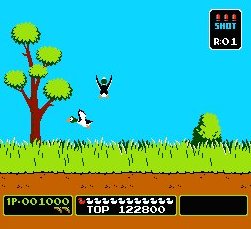 Must kill Anglo-American ducks for the glory of the Rising Sun.

This one is pretty much self-explanatory. At a young age, we were trained to by the NES Corporation of the Japanese Empire to shoot laser guns. The fodder for these military exercises was ducks that would frantically try to escape being shot down and ravaged by a chuckling dog. It was a virtual duck holocaust that would only end once enough ducks escaped the child's laser beams of death. Throughout all this butchery, the dog would berate and mock you non-stop, making the anger inside you boil over into rage. A rage that could only be quenched by the blood of a thousand electric ducks. While this is an older game not currently on the market, NES is still a big player in video games, and as such should still be held accountable for their past animal war crimes. Also for Bayou Billy because I bought it for $50 and it was the worst game I ever played and I couldn't return it. I want my 40 acres and a mule.

Imagine this if you would be so kind: you are walking down the street just minding your own business and you spot a corn dog on the ground. Nobody is currently claiming this delicious treat, and your stomach grumbles with hunger. Just as you start to lose interest, the corn dog jiggles around a little, and you notice a shiny bell attached to it. Well now it is irresistible and you pick up the corn dog and take a bite, only to find that a barbed hook was hidden inside that pierces your cheek. Then you are yanked by the hook, tossed into a container where you can't breathe, and have to get your picture taken with big smiling hick that needs a bath. This is what it is like to be an electronic bass in one of these various fishing games that come out every year to supply the demand for aquatic sufferings that these terrible gamers participate in for personal glory and suppressed homo-erotic tendencies. Who plays fishing games anyways? Anybody that buys these games should be put on a list and have their phone lines and computers tapped by the FBI and PETVGA. Although we still don't have the authority to do wire taps, I have eavesdropped under beds before with my notepad, something I was very afraid to do because I just watched Poltergeist again and that freaky possessed clown still scares the hell out of me.

I'm gonna kill every last one of you motherfuckers!5. Oregon Trail

This game is the oldest, and most reckless of all the games involved in the ritual abuse and killing of virtual animals. I'm sure everybody who's ever owned a computer has played this game at one time in their lives. It was created to not only entertain, but to also teach youngsters about this exciting chapter in American history. Yet within this game there is also a lesson of recklessness and waste that is inexcusable. Of course I am talking about the portion where you have to go hunting for your food. While I am personally against hunting, I can at least see the necessity of it when you are traveling in the wild, but what this game teaches is far from necessary. The average hunting yield if you are a decent shot is 3,000 pounds of meat! But alas you can only carry 200 pounds back to your wagon! Oh well, there's plenty of animals out there anyway, let them rot in the sun! This display of shocking carelessness is downright evil and wrong. It's this kind of behavior that caused the great buffalo to be wiped out by the white man, just because he had a few extra bullets or was bored of getting dysentery. Somewhere off in the brush is a digital Native American witnesses the massacre, a single tear falling down his pixilated face.

Take a long look at the startling truth of video game animal abuse. Was it worth it? Was it really worth it? You horrible monsters.