The New Pope Is A Nazi!

You know, Nazis wore hats…THE POPE IS A NAZI. DID YOU HEAR?! DID YOU HEAR ABOUT THIS??? I JUST HEARD THAT THE POPE WAS A NAZI DURING WORLD WAR II AND I AM WRITING AN ANGRY ARTICLE ABOUT IT WITHOUT RESEARCHING WHY OR HOW HE BECAME ONE. LOOK AT ME! I’M A FUCKING JOURNALIST. HA HA! I’M A SENSATIONALISTIC TWAT. I’M A WITLESS CUNT THAT IS ALL OUT OF IDEAS BUT THE POPE IS A FUCKIN’ NAZI. WHAT IS GOING ON WITH THE CATHOLIC CHURCH?!?!?!?!?! IF I WAS A KID DURING THE NAZI PARTY REGIME AND THEY TOLD ME TO JOIN THE HITLER YOUTH I WOULD HAVE SAID, “FUK U EAT MY DICK ASSHOLES” AND STOMPED HITLER WITH MY COMBAT BOOTS. THE POPE IS A NAZI. PAY ATTENTION TO ME! PAY ATTENTION TO ME!!! I HAVE NOTHING ELSE TO SAY!!!

When Joseph Ratzinger was declared the #1 pick in the 2005 Pope draft the fact that he joined the Hitler Youth in 1941 startled some people. Also, his similarity in appearance to Senator Palpatine from those gay Star Wars movies and his last name, RATzinger, didn’t really help people’s perception of him.

However, when we realized that Hitler Youth membership became mandatory after 1938, most rational people calmed down and went back to watching American Idol and The OC. But there are still some people, vehement anti-Catholics, sensationalistic twats, and tabloid fuckups that cling to this easily misunderstood facet of Ratzinger’s life and twist it into whatever they want so that it fits into their own dumb agenda. “The Pope is a Nazi! The Pope is a Nazi!” they cry. Give me a fucking break. Hey Nazi, you’re the Nazi, Nazi! You’re the Naziest Nazi who ever Nazied!

Goddamn you Kobe stay away from the white women!Being called a Nazi is a serious accusation. It’s like being called a Star Trek nerd. Even if you are completely innocent, you will never ever shake off that title. No matter what, when people look at you, that word will be in the back of their head at all times. It’s like being charged with rape. It doesn’t matter if you are innocent or not. Some will ostracize you from the community. Others won’t do business with you. It will be in the public conscience forever. Kobe Bryant can’t go anywhere without people thinking, “Didn’t he rape that one chick? Don’t the Lakers suck now too? Fuck you Kobe you rapist!” whether he raped her or not. When Kobe Bryant takes foul shots at away games the opposing team’s fans hold up signs and scream, “RAPIST! MISS RAPIST! YOU FUCKING RAPIST MISS THE SHOT! KOOOOOBBBBEEEEE! KOOOOBBEEEEE! RAAAAPPPIIIIIISSSSTTTT!!!! RAPPPPPIIIISSSSTTTT!!!”

THE DENVER NUGGETS ARE GOING TO RAPE THE LAKERS LIKE KOBE BRYANT RAPED THAT WHITE BITCH.

The worst articles about the new Pope are the ones that try to get attention by claiming the Pope was a Nazi and then start in with the usual anti-Catholic mantra. They wrongly state that he was a Nazi and then go, “See that’s why these conservative fucks are wrong blah blah blah!” Shit, one article I read even went so far as to compare Catholicism to Nazism. Take a look at this shit.

Consider some of Pope Benedict's stands and assertions about Catholicism:

* He believes Catholicism to be the only "true" religion;

* He has stated that other religions are "deficient" and has called Buddhism an "auto-erotic" spirituality;

* He has denied assertions of sex abuse in the Catholic Church;

* He is a neo-conservative theologian; and

* He is opposed to homosexuality, woman priests and stem cell research.

Hmmm. Sounds strikingly familiar to the intolerant attitude that was the rally charge for many Germans during the Nazi era.

YEAH, JUST LIKE EVERY OTHER CONSERVATIVE FUCKING CATHOLIC IN THE ENTIRE WORLD. BUT THIS ONE IS A NAZI RIGHT? Now don’t get me wrong. I dislike the Catholic Church, I dislike the Pope, and I am an atheist, but when you compare an entire religion to Nazism, you are done. That’s it. I stop reading. The fact is no one would have read this douchebag’s article had it not been for the deliciously sensationalistic Nazi spin. Shit, I don’t think anyone is reading it anyway.

But you know, I wonder what Bill Berkowitz of Working for Change has to say about this.

How many Nazi salutes did he give? How many times did "Sieg Heil" come out of his mouth? How many Jews did he see rousted from their homes and carted off to the death camps of Auschwitz, Buchenwald, Maidanek, and Dachau? Those are some of the questions that immediately sprang to my mind when the news came that the conclave of 115 Cardinals had elected the 78-year old German, Cardinal Joseph Ratzinger, as Pope. 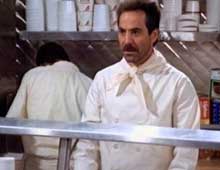 The next pope.How many Berkowitz’s did he gas? From the way this guy is talking it must be a lot! Just come out and say it man. THE POPE GASSED MY PAPA. You might as well. Hey, you might even get a few more hits. I mean, it’s not like your article has any credibility left anyway. Oh yeah, sure, he’s a Nazi despite the fact he never attended any meetings and eventually deserted the army after two years of service. Oh sure, he probably shot down American planes while he served in the Flak (Germany's anti-aircraft unit). But let me ask you this, how many people originally from Germany, Japan, and other countries are living here in the United States that don’t have ancestors that fought against the United States at one point or another? Shit, BMW built the planes that Germany used to fight the Americans yet there are still people driving the 7 Series around. During war you do what your country tells you to do, especially if the alternative is prison or death.

I’m going to build a time machine. What I’m going to do is take old Bill here back in time to 1941 Germany. We’re going to sit there and wait for the Nazis to find him and say, “Join us or die.” Bill Berkowitz (Uhm, we’ll have to change that last name for this to work) is going say, “Sorry folks, but I humbly oppose the Nazi regime and I don’t wish to join your organization.” and we’ll see what happens.

George Washington owned slaves during his lifetime. He didn’t want to and in his heart he knew it was wrong but he did anyway. It was the cool thing to do at the time. Slavery was just another fad like pogs or Pokemon. But in 1976 he was posthumously appointed the grade of General of the Armies of the United States, the highest ranking military position the U.S. has to offer. The fact that he owned slaves didn’t seem to bother anyone. The fact that Joseph Ratzinger involuntarily joined the Hitler Youth shouldn’t bother anyone either.

Dislike him for his stance on homosexuality. Dislike him for his stance on abortion and contraceptive use. Dislike him for his views on the Catholic Church molestation scandal. But the fact that he involuntarily served in the Hitler Youth, where jail or death was the only other option, is not a valid reason to dislike the man nor is it a solid foundation on which to write a serious newspaper article. That idea has been thrown out the window by anyone with half a brain. His service in the Hitler Youth is but a footnote in the history of his life. Those of you still ranting and raving that the new Pope was a Nazi should be sent to concentration camps and gassed for your unoriginality and inability to see beyond the sensationalistic. You should be ashamed of yourselves.