Wednesday, May 14, 2014 by Drew Fairweather (@drewtoothpaste)

While we occasionally detour into bourbonnery, or get tricked into liking wine for a couple months, America's drink is beer. Whether it's low-percent candybrew or bitter, pineconey IPAs, beer is the liquid that brings us together, and sometimes costs $9. We need it when things go wrong, and we need it to celebrate when normal or good things happen. Saddle up, it's Mother Fuckin' Beer Time! 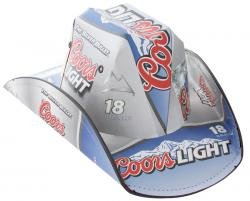 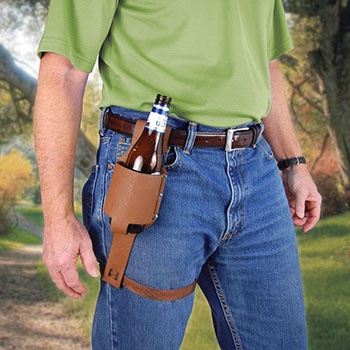 Once you strap on your hat, you're gonna need something to hold your beer. NO! Not your regular pink hands. You need an ACCESSORY. The manufacturer of this leather beer holster insists that it's for "rugged" men, which is not the word I'd use to describe a dad who tucks his shirt into his Romney jeans. 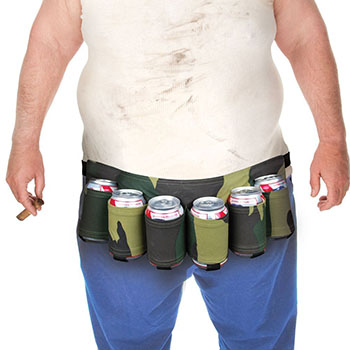 While the one-beer-holster dad exudes suburban dorkery, the manufacturer of this six-beer holster went for the "you're gross" demographic -- sweatpants, stained shirt and all. Perhaps you'll buy it ironically because you'll say "Haha, look at the guy, I'm going to be like that guy," or maybe you'll buy it sincerely because you're the guy.

Either way, you bought it, ensuring that children overseas will work another 12-hour day assembling beer holsters, wondering what this camouflaged sling is for, and why it's so important that it's worth forgoing a 6th-grade education to make. They imagine masked doctors using it to store surgical tools, or aid workers using it to carry rice to starving children. (The manual-laborers who assemble the Drunk Ass Beer Gear 12-Can Vest, on the other hand, suspect they are assembling instruments of war.) 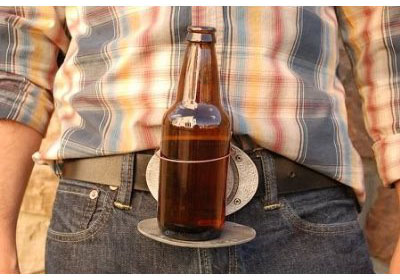 I see you there, bottle-beer drinker, chuckling at the crude antics of can-beer consumers. You'd never use a dipshit product like that to hold your beer. You need something with panache, like The Beer Buckle! You can stand at the beach, beer lopsidedly teetering against the fold-out ring on your buckle, radiating confidence and worldly sophistication. You're a true class act, at least until you forget you're wearing a beer on your dick and lean over or move or walk. 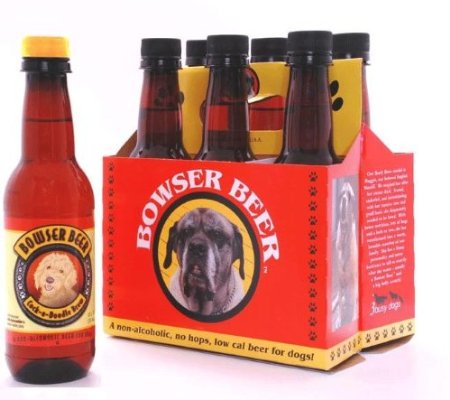 This brings us to the upper-crustest Mother Fuckin' Beer product of them all: Dog beer. Not beer with a picture of a dog on it, but beer made for dogs. It's non-alcoholic, which means it's probably closer to kvas (the Russian malt drink), but no matter. You bought that $22 six-pack of fake beer for your dog, and now your dog can join you in turning money into beer and then pissing the money out.

If he'll drink it, that is. The "most helpful" review on Bowser Beer says"...gave this to 3 different dogs and none would drink it... and one of them eats concrete."