Also, rereading, I just realized I spent a good quarter of this article talking about a thread on the forums. I'm a step away from attending goonmeets and starting all my sentences with "remember that one thread where...". If God has any mercy left in that cold, black heart of his he'll strike me dead before that ever happens.

THE GIRL I'M ABOUT TO MARRY (you have to put it in all caps to show you're ironically referencing the girl you're dating, not being serious) recently got her nursing license. I am very proud of her, especially since she got a job and used her signing bonus to buy a nice big HDTV for our new house. I don't really watch a lot of TV but it will be cool for video games and football since we have all the local channels in HD. 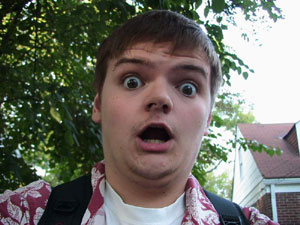 SAVING THROW I'm graduating in a few months. It's very exciting and scary for me at the same time. I already graduated from another school once but it was only an associate's degree. I was happy with that until I read a Kurt Vonnegut book in which he made fun of people from community colleges. Since I didn't want Kurt Vonnegut to think poorly of me I registered at Indiana University and now I'm a semester away from a bachelor's degree. I have a good idea for a nonfiction book that I'm starting research on soon, and with Lowtax's blessing I'll probably post excerpts here from time to time. I'm not going to spill the beans on what it's about just yet, though.

On one final boring note nobody cares about but me, my cousin was recently diagnosed with lymph node cancer and I agreed to take his dog for him while he went to get chemo at some chemo supercenter in Florida. The dog's name is Charlie. He's huge and white and he has a slobbery little goatee that hangs down under his snout. At one point he stayed outside all the time but now he's managed to weasel his way into our home. He even sleeps at the foot of the bed. We're up to two dogs and three cats and it's getting pretty cramped up in here. I'm just finally glad I've got an office so I can kind of get away from it all.

Even though Peyton manning is a sissy fag who can't eat a bowl of cereal in January without requiring the Heimlich maneuver, I'm pretty proud of Adam Vinatieri and the Colts beating the pants off the Baltimore Ravens. There's something great about Steve McNair getting made to look like a bitch in undoubtedly one of his last playoff appearances. When he got the ball smacked out of his hand at the end of the game I rewound it and watched it like ten times in a row.

I know it's pretty lame to like the Colts these days but I've been a fan since the Jeff George days, and I want to let you closet fans know it's alright. This could be our Super Bowl year~

I think Flea's probably going to make an appearance in next week's Pregame Wrapup. Or not. I GUESS WE'LL SEE WHEN WE GET THERE, HUH?

Believe it or not constantly clicking "send/receive" in my email inbox has yielded quite a few successful hits this week. Thanks to everyone who takes time out of their schedules to drop me a line. There's a famous Mark Twain line about writers and compliments, and while I can't be arsed to look it up at the moment I know it's true.