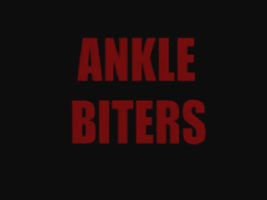 Overview: When a pack of midget vampires steal an ancient sword with the power to turn regular sized humans into vampires, a half-human, half-vampire hunter and his allies are the only ones who can stop, or care about, their insane rampage.

The Case For: Midget vampires, need I say more?

The Case Against: Midget vampires, need I say more? 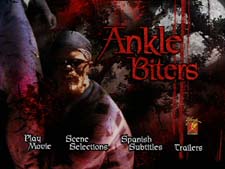 Let me first say that the "Ankle Biters" DVD has without a doubt the most abrasive menu I've ever seen. At least it has a menu - that puts it a step ahead of a few of the movies I've watched. The background picture is a jumble of random crap, as well as a picture of the head midget vampire. The real kicker is the music. Instead of the looming orchestral score that hints at the terror to come, like a lot of DVD menus seem to have these days, "Ankle Biters" goes for more of a "let's make our viewers want to turn off the movie as quickly as humanly possible" angle. It's the movie's theme song, which is basically just an angry guy shouting the movie's tagline - "three feet tall, two inch fangs" - over and over again with no particular sense of rhythm. It reads something like this:

It seriously feels like you're being attacked by some sort of comedy wolverine. There are really only two possible reactions to this song - shrieking in sonic agony, or laughing until you die. Either way, it pretty much sets the pace for the actual movie, although truth be told, the rest of it isn't quite as entertaining. 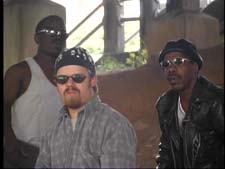 The fun begins somewhere in Georgia, as a red-headed nerd with a thick Southern accent and a Tool shirt - in other words, the most annoying form of life on the planet - running from a pack of four blood-sucking dwarves who dress like extras from a Nelly video. Despite the nerd's much, much, much longer legs, he is unable to escape from the bloodthirsty midgets. They tackle him and begin to feast, by which I mean they make growling sounds while facing down. Adam Minarovich only stole a couple of extra ketchup packets from McDonalds before shooting began, so despite all of the biting, brawling, and gunplay that occurs in the movie, there is surprisingly little blood. The midgets are interrupted by Drexel, the half-human, half-vampire vampire hunter and his own personal midget, T-Bone.

What follows is one of the worst fight scenes in recorded history. To give you an idea, at one point Drexel crouches down and holds out his $3.99 K-Mart toy shotgun until one of the vampires actually walks right into it. They stand there for a good long while, looking pretty damn bored as they wait for some special effects to kick in. When the gun finally fires, it does not so much produce buckshot as much as some lame-ass sparks. The thrills never let up for a minute, let me tell you. Drexel and T-Bone scatter the vampires, then learn from the nerd, who should really decide between his current attempt at growing facial hair and his desire to ever have sex in his entire life, that he was attacked when dawn broke at an all-night party that he was invited to by a local bartender. Drexel climbs onto his motorcycle, T-Bone struggles to lift himself into his super badass sidecar, and they ride off, ushering in the opening credits. 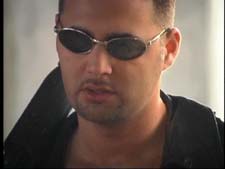 If Drexel's ass were any badder, he'd have hemorrhoids.

The beginning sequence of the movie serves to introduce three things: the midget vampires, the protagonists, and the massive technical problems. As far as I can tell, "Ankle Biters" has only one camera to its name, and that camera has a few glitches. For one thing, it inexplicably changes the shot to circular framing at random intervals. This may be because the cameraman keeps accidentally pressing a button and is too damn stupid to realize it, or Minarovich bought himself a broken video camera from his neighbor's yard sale. Also, the film's main (read: only) microphone is on the camera, so it doesn't pick up any of the voices unless the actors are speaking straight at it. This is especially bad news for Drexel, who's tough guy rasp is too quiet to be heard no matter how high I turn up my speakers. I apologize in advance for the fact that I will have to guess at any information Drexel gives, since the vast majority of his lines are either mumbled or completely silent. It's not like anyone really wants to hear from him anyway. When people rent "Ankle Biters," they're in it for the midgets! Well, either that or they hate themselves. 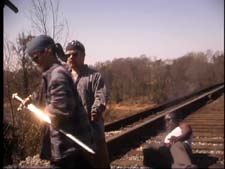 A bitter old guy and his younger, geekier companion who won't shut up about "bustin' caps" climb up onto an abandoned bridge. The fanged foursome appear out of nowhere, represented by the camera never turning in their direction until its time for them to be there. Ooh, mysterious! Faster than you can finish giggling at just how comically short they are, which is really the point of their existence in the film, the lead vampire demands to be given a sword. The geeky guy pulls his coat off of a long sword with a ruby hilt in one smooth motion, by which I mean several slow, jerky motions. The lead vampire explains that the sword has the power to turn tall humans into vampires, who can then turn other tall humans into vampires. Then, just to prove how evil they really are, instead of paying the old man and his dweeb for their services, the vampires bum rush the old man, taking him out at the knees. True to the film's title, they do indeed bite him on the ankles, which I'll admit is funny as hell. A bunch of three foot tall wiggers trying to prove how tough they are by headbutting a grown man in the shins - it's like an inner city third grade class, but without the possibility of learning something. The geeky guy escapes by jumping off of the bridge, which seems like it would amount to something later on, since the vampires killed his partner and stole his sword, but trust me, it doesn't. The geeky guy is never heard from again. 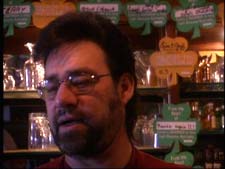 "I exist. That's all I have to say about that."

Drexel and T-Bone pay a visit to the bartender who gave the nerd the party invitation, and who has precisely one facial expression, which I believe is meant to convey the sentiment "I'm over here." They order a couple of shots of tequila, then prove just how manly they are by downing the harsh liquor like the water it most definitely isn't. I mean it. No water here. Seriously. Now that they're all watered, I mean, liquored up and feisty, Drexel demands to know if the bartender is working for the dastardly dwarves he just encountered. When the bartender doesn't answer, Drexel grabs his collar and pulls him close. Well, not really. To be honest, the bartender leans across the bar and lets Drexel grab his collar. That's pretty much how the violence works in "Ankle Biters." The victim voluntarily gets into a vulnerable pose and holds it until someone finally attacks. It's fight choreography at its best.

The patrons of the bar are not about to let their favorite booze distributor get his shirt all stretched out around the neck, so they line up to get systematically beaten. The high point, so to speak, is definitely when T-Bone jumps onto the bar and smashes the a bottle over someone's head, which is accompanied by the sound effect of about twenty pounds of glass being smashed with a bowling ball. Finding the proper sound effects is not one of the movie's strong suits, but at least you can hear them. When the fight is over, Drexel cuts the bartender's hand and lets blood drain into a glass, and drinks it down. My problem is not with the blood drinking. My problem is not that he drinks the blood of an innocent person. My problem is that the tiny cut he makes on the bartender's hand with his puny little Swiss army knife creates enough thick, syrupy blood to fill a glass in about two seconds. This movie has serious blood issues, among other things.