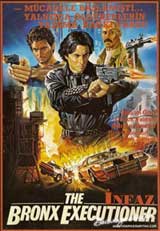 Overview: A rookie cop is sent to the badlands of the Bronx to police a war between rival factions of noodle filled robots.

The Case For: Bronx Executioner is great if you're writing an essay about "Fashion Mishaps of the 1980s" or have been craving stock footage of high technology from the same period. It also helps if you are drunk or insane.

The Case Against: The plot makes so little sense that it often seems like the writer and director were actively attempting to destroy the film's continuity. This would ruin any movie that wasn't already trash, which rules out "Bronx Executioner" which is garbage for dozens of other reasons too! 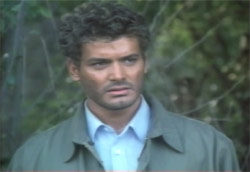 Yes...I...am...a...police...officer.When a movie opens with two sequences of stock footage you know it's going to be a creative masterpiece. Looking like a promotion reel from a video production studio done in 1980, Bronx Executioner opens by showing off the wonderful mysterious technology of the early eighties. Lights blink on huge consoles, TV screens display amazing color bars, and occasionally green dots move around. A robotic sounding narrator tells us that the "last chapter in human evolution" has been written and then trails off talking about machines replacing men when needed. That's as much of an overview of the world of Bronx Executioner as you get throughout the entire movie.

Following this stunning montage we get more stock footage, this time of Manhattan on a sunny day with people, cars, and river boats bustling merrily along. If it's meant to portray an urban dystopia then it fails miserably as it looks like it was ripped from a 1975 Manhattan board of tourism promotional video. What makes this sequence even better is that it obviously replaces a scene that was supposed to be set in a futuristic police academy. Dubbed over the Beautiful Manhattan Bicentennial footage is a gruff future police chief type informing the protagonist James Crowley that he has graduated the future cop academy. Crowley is told that he will be sent out to "South East Sector" of the Bronx for his final test where there will be "danger at every street corner". 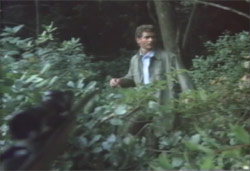 First Person Shooter or horrible 80s movie? You be the judge! When the chief's speech concludes we finally get some footage that was filmed for the movie. It turns out the Bronx's South East Sector closely resembles the woods in someone's back yard with jungle sound effects added in. Apparently running from the squealing monkeys in the background, future cop Crowley (who is dressed like he's on safari) is also being pursued by a sniper who will rise occasionally from behind a bush to menacingly point a hunting rifle at Crowley as he stumbles through the frame. When Crowley finally stops and it seems certain he is about to be gunned down a mysterious black guy shoots the even more mysterious sniper, thus saving Crowley's life. It turns out that the black man is named The Black Man and is a cop at the Bronx Woodland Wildlife Preserve that Crowley has been assigned to.

Their conversation marks the first dialogue in the film and the realization that Bronx Executioner truly is a masterpiece of filmmaking. The makers of Bronx Executioner could not afford exterior sound equipment, so much of the film's dialogue is done in this bizarre over dub style that is painful to watch. Basically all of the actors speak in English very slowly with exaggerated lip movements and then either they or someone else has recorded voice overs of the same dialogue with a complete disregard for timing. Apparently the biggest difference between the present and the future is that in the future they do they same sort of things we do only a lot slower. We do learn that Crowley has been sent to Bronx Sector to police androids that are malfunctioning. Apparently there is some 50s style gang war between two groups of androids. One faction is led by the particularly nefarious "Margie" android, who we meet in the next scene issuing orders via Android TV to her leather jacketed crony "Shark". 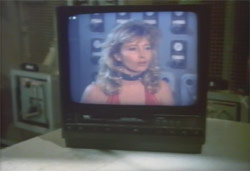 Next week on "That's Margie!"... A gang of humanoids, which are either people or more androids, runs around dramatically with guns being led by a white body builder with the voice of a gruff black man. Margie vamps in a red rubber dress with some of her soldiers next to a pond and proclaims that she "only loves death". Seconds later a bunch of people being pursued by Shark towards Margie and her thugs are cruelly gunned down cowboys and Indians style. They all collapse dramatically gripping invisible wounds and their tanks tops, head bands, and acid washed blue jeans are stained crimson with imaginary blood. Margie and Shark pause from the shooting to pose and look meaningfully at each other before returning to the playground slaughter.

While this is going on Thick McTough with the black man's voice - who is actually named "Dakkar" - is busy ransacking a grade school chemistry lab. When he learns that Margie and Shark have attacked he rounds up his men to drive aimlessly around a gravel pit in jeeps. Margie escapes "back to the castle" just before he arrives on the scene of the massacre and Shark is chased off by Dakkar's precision long-range shotgun fire. 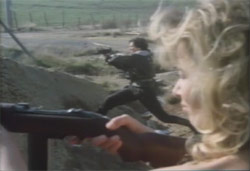 Margie and Shark dish out some high velocity android justice to the humanoid scum. Meanwhile, back in another movie about Crowley the rookie cop just assigned to be a Bronx Sector Fish and Wild Android Warden, Black Man explains that they can't just shoot all the androids running crazy because of political correctness. The government is experimenting on the androids by cruelly lowering cans containing live meal worms into the Bronx Sector. Another factor has also been introduced into the jungles of the Bronx; a mysterious man or woman is controlling the androids to gain power. Power over what is unclear, maybe the jungle apes and the cans of meal worms. The government is planning another helicopter drop of sweet, sweet worms and Black Man invites Crowley to monitor it with him. They park their giant black sedan inconspicuously behind a piece of tumbleweed and watch as a helicopter drops a crate next to a pond. Margie, Shark, and their gang of pro dirt bikers are not about to let Dakkar and the humanoids have the cans.

Initially the androids shock and awe the humanoids by doing radical motorcycle stunts, but the shock wears off and a long and clumsy fight with pipes ensues. The humanoids manage to defeat the androids but then, for no apparent reason, Black Man goes out pretending to be sick and proceeds to beat them all up with a huge pipe. One humanoid escapes Black Man's mighty wrath only to be choked by Dakkar for "touching [his] sheriff". At this point I wanted to turn the movie off and cry but I forged on.