Abraham Lincoln: Vampire Hunter; Brave; Seeking a Friend for the End of the World; Hysteria: Red Lights; That's My Boy; The Pact

After last week's solitary critique, we've compiled an astonishing seven reviews for this edition of Current Releases. That's one film for every day of the following week, if you want to play it like that, from Abraham Lincoln: Vampire Hunter as a treat on Monday all the way through to the disappointing The Pact for next Sunday!

EXPECTATIONS: I have a good feeling about this one. Something about the silliness of the premise and Rufus Sewell playing a villainous, slave-owning vampire just has my interest well and truly piqued. Besides, with a title like that, what can possibly go wrong?

REALITY: Turns out the answer to that question is "very little," because Abraham Lincoln: Vampire Hunter is just terrific in almost every way. It definitely embraces the absurdity of its situation, but it goes beyond mere self-awareness and into genuinely intelligent storytelling. This is a film with a lot of faith in its audience, and I think that regardless of what you bring into it, you're definitely going to find a lot to like.

Narrating from a journal kept throughout his life, Abraham Lincoln (Benjamin Walker) tells the story of how he balanced his political career with a secret life of battling vampires at night. After a failed attempt at revenge on Jack Barts (Marton Csokas), the man who killed his mother, he learns that the man is a vampire, and so he trains under the mysterious Henry (Dominic Cooper) to defeat these creatures of the night. After developing a romance with Mary Todd (Mary Elizabeth Winstead), he and his friends Will (Anthony Mackie) and Speed (Jimmi Simpson) go into politics and start a war to end slavery and bring about the downfall of ancient vampire lord Adam (Rufus Sewell). 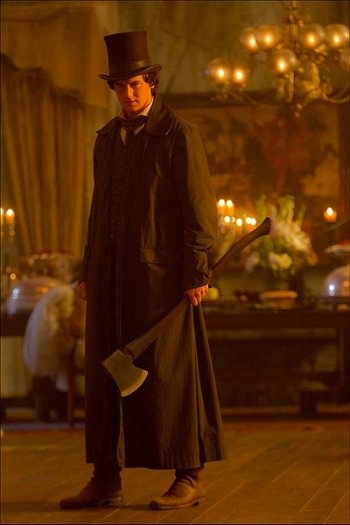 Politics!Now, I know it sounds absolutely mental and you're probably wondering how the political situation fits into the vampire scenario, but in the context of what is going on in the narrative, you never once find yourself questioning the reality of it. The question of what Abraham Lincoln was really doing, what his real motivations were in these matters, is irrelevant, because there is a real lesson at the heart of all of this, one of truth and honesty in American politics. In this depiction, the concept of "honest" Abe having a secret that he feels he can never share is what drives his character arc and informs the strength of his relationships with the other characters. The truth gives him strength, both literal and metaphorical, and knowing the truth empowers those around him, but when the truth is this unbelievable and horrifying, who could dare to impart it?

This is a film that knows when to play for laughs and when to maintain a straight face. It knows that we won't buy the romance between Abe and Mary unless it is played with sincerity and that we won't accept the horror of vampirism and slavery unless it is presented in a grounded way; it all goes to serve the central idea of this primarily being a film about Abraham Lincoln and what we can learn from him.

Lincoln is famed, of course, for his honesty, and so Abraham Lincoln: Vampire Hunter is a strikingly honest film. By inserting vampires into the life of an American hero, they have used a very identifiable and timeless monster to embody all that is wrong with the country and the world. And considering the importance placed upon a scene in which Lincoln destroys an imposing phallus with a single blow from an axe (a working man's weapon) and the omnipresence of the massively phallic Washington Monument, it is clear that this film has very strong opinions about what the heart of the problem is, which is that the presidency is a very inconsistent institution and one in which too few people are willing to make a stand. A great man like Lincoln can do the right thing, but without more like him he will always be destined to be filed away in history, one more name in a list of American presidents with contradictory ideals.

The entire film is an absolute treat of visual storytelling. A scene that likens the swinging of his axe with his mastery of words demonstrates excellently realised characterisation. With his later assertion that the word is the more powerful weapon, it is important to show that he wields both with equal dexterity, the weapon of the intellectual and the weapon of the working man, both fueled by truth and honesty and both proving their importance before the end. The action scenes are where the film draws most of its humour, embracing the absurdity of the premise but presenting these feats of ridiculousness in a blend of Matrix-style speed ramping and picturesque battlefield renderings. They are outrageous, certainly - they easily reach A-Team levels of hilarious impossibility - but they are also painterly and beautiful. As the film progresses, everything becomes increasingly stylised, with the cast being made up to look old and the scenery becoming more and more confined by its oil-painting aesthetic. 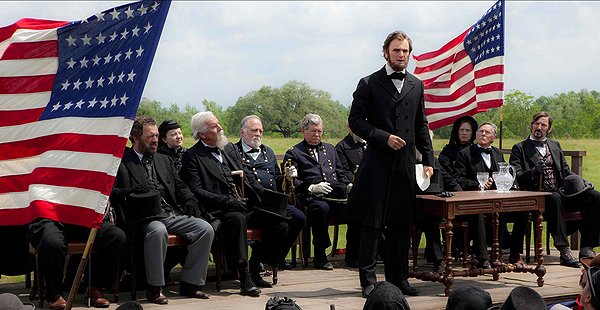 Here we have one of those rare instances of a film's aesthetic being enhanced by the 3-D, too. In one early emotionally charged scene, our attention is drawn to a single speck of dust floating in the foreground. That's a loaded image; the film is challenging us to both accept its importance and look away from it. That speck of dust is Abraham Lincoln, you see, tiny and solitary, but also important and powerful. That sounds like a joke because it is. Director Timur Bekmambetov, best known for Wanted, clearly has a rather unusual sense of humour, and he brings this to bear in every aspect of the film with great care. This is going to a tough one for him to follow, but at least he has put his name on the short list of directors who really know how to use 3-D as a storytelling tool.

The cast does stellar work across the board. Benjamin Walker balances the different relationships with the various members of his entourage effortlessly. For a relatively unknown actor, he has definitely proven to be a powerful screen presence and a talented leading man. The chemistry he shares with Mary Elizabeth Winstead is especially effective, and she herself shows some great talent and skill in depicting her arc from romantic figure to wife and mother and finally to freedom fighter. The other true standouts here are the villainous vampires; Rufus Sewell and Marton Csokas. Sewell is as good as ever, employing an oddly muddled accent to subtly hint at his well-travelled history. His stillness and power are nicely offset by Csokas, who is an absolute master of ham, chewing the scenery and throwing horses with aplomb.

I had a good feeling about this one from the start, there's no denying that, but who can ever have expected Abraham Lincoln: Vampire Hunter to be the smartest, the most exhilarating and the most purely cinematic blockbuster of the Summer? Between this and Django Unchained later in the year, I'd be glad for revolutionary-minded Hollywood films to start taking centre stage in this era of homogenised superheroes and jukebox musicals.

MINORITY REPORT: What's amazing about AL:VH is that it does in one film what it takes most superhero movies an entire franchise to establish. We get both the origin story and the retirement/call back to action. If this were a Marvel film, it would end after the first fight, with Lincoln standing on the White House balcony, staring into the sunset, saying "Time to hunt some vampires... because I'm Abraham Lincoln VAMPIRE HUNTER." - Martin R. "Vargo" Schneider