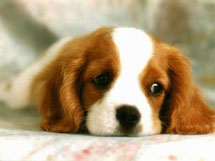 Model KN VV00F, otherwise known as Hello, and congratulations on becoming the proud new owner of an Our Father Inc. pet unit! With proper care your pet can provide years of fun and companionship, all with less expense and emotional drain than our WYBTTCH Female Human unit!

As you know, we here at Our Father Inc. strive for perfection in everything we do. We continually strive to improve our products (and on that note, we'd like to apologize for the whole "Israel" thing), and we are diligent in fixing our mistakes. If you have owned a pet in the past, you might notice a couple changes in your new unit. Don't stress out, though! We are confident that this model is 100% more reliable, efficient, and user friendly than previous incarnations.

So read this guide, make sure you understand the changes, and have a blast! If you like our changes, feel free to drop us a line – it's always good to hear from someone who doesn't want something.

Fixed glitch that caused some Cocker Spaniel models to respond to the name "Liv Tyler".

Your dog will no longer die. There is no more death. Enjoy your incredibly crowded planet, you whiners.

Chihuahuas operating in reverse mode no longer bark uncontrollably until someone comes to the door.

Adolescent models no longer attempt to mate with stereo speakers when Stevie Nicks is playing.

Vets are now required to not charge fifty bucks when they clearly just glanced at the dog for like a second or so help me Me I'll smite the shit out of them.

New models no longer chew their own legs off when trapped. Instead, they swallow a fake cyanide tooth. Optional "don't kiss me" decal ($24.99) recommended for homes with children. 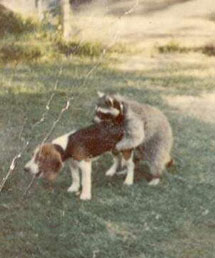 Certain models now come with Heimlich Maneuver training right out of the box!

Dogs who howl "I love you" or other common phrases now trained to use video cameras so they can mail their own VHS tapes to "America's Funniest Home Videos".

Chihuahua models trained to equate "Yo Quiero Taco Bell" to "I am an intruder; please rip my testicles off".

Chinese Poodles no longer drive the wrong way down one-way streets or laugh at their owners even as they take their money and shelter for free.

Most breeds required to write a formal apology letter when they drag a used tampon out of the trash in front of company.

New iPod dock allows users to listen to Barry White when they're trying to get busy with their lady and the dog just won't stop staring at them.

Fixed glitch that caused Boston Terriers to say "yes, dumbass", when asked if they "want to go bye-bye".

Fixed compatibility problems causing dogs to shed when The Beastie Boys are played.

New hybrid Miniature Doberman/Slap-On Bracelet allows you to take your pet wherever you go.

Dogs put in "people clothes" by their owners no longer bolt to the bathroom and eat the entire contents of the medicine cabinet.

Implemented "Prince of Persia"-style rewind system in case you want to try out that "pop rocks and soda" thing on your dog.

Some breeds are now capable of performing figure-four leglocks and flying elbow smashes when wrestling with on the floor with their owners.

Models who continually shout "it's bacon" no longer burst into flames at the sight of a crucifix.

Cats can no longer introduce themselves by barging into a room and saying "how are you gentlemen". Instead they rub against your ankles and purr.

Buttoncat makes every Geocities page smell like love! And pee!

Cats have become great pets you'd want to keep around the house. We've transformed them into dogs.

Removed vocal chords so that troublesome models cannot keep their owners awake all night. We also gave the cats constant, blinding headaches. This is just to amuse us.

Repaired glitch that replaced "curiosity" with "crippling alcoholism" in some models.

Obedience chip assures cats won't climb your Christmas tree unless there's some really wacky shit going on in there.

Instead of dragging fresh kills to the front porch, revamped feline models scour the neighborhood for pornography, drugs, and ill-gotten money and burn their findings in the town square.

New adaptive learning software: No more need to shake your baby at a cat and shout "don't lay on this thing's face you stupid gray-and-white faggot" to prevent suffocation!

Reinforced titanium spinal column ensures your cute new kitten won't end up as a stain under the La-Z-Boy.

Fixed glitch that caused some Himalayan Longhairs to travel at the speed of light, effectively allowing them to catch that damn laser pointer.

Due to a recent patch that allows fish to perform simple tricks in exchange for food, birds are now officially the gayest pets a person can have. Sorry about that. 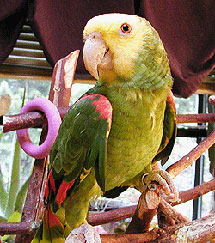 Disinterested Generic Bird ignores the $20 toy you bought it with twice the gusto of previous models!

Larger claws allow speaking models to rap each other in the knuckles with a ruler when they use poor grammar.

Nutritional systems tweaked to maximum efficiency; very low chance of starvation if owner inadvertently leaves a blanket over his bird's cage for a week or three.

All talking models who know nothing but South Park catchphrases reprogrammed to call owners "the classiest cats at the WIC office".

Fixed glitch that caused urban pigeons to group up, grab homeless people, and drop them in medical waste dumpsters.

With these fixes in mind we're sure you'll find your new pet to be even more fun and useful than your last! If not, you can take it up with the big guy. I'm sure he won't mind taking some time off from saving dying children and solving world crises to make your cat "not suck as much", you selfish jerk.