A Look Back on the Regan Interviews

Judith Regan is a renowned Fox News hostess and a well-respected publisher responsible for her own label at HarperCollins, but she is perhaps best known for a series of award-winning interviews she conducted between 2006 and 2009. Regan raised eyebrows, as well as the bar for journalism, when she agreed to pay O.J. Simpson over three million dollars for a faux confessional book and an accompanying televised interview special. The Simpson interview was so successful that Regan embarked on a series of interviews in an effort to hold the cultural zeitgeist and enrich the field of journalism.

It seems inevitable to us now that she was destined to become the next Barbara Walters or John Gibson (sans horrific albinism), but at the time of the Simpson interview she was a very controversial figure. It would do us well, then, to start at that formative moment in her career and have a look at the sort of noble journalism that earned her a well-deserved reputation for incisive reporting and keen social commentary. 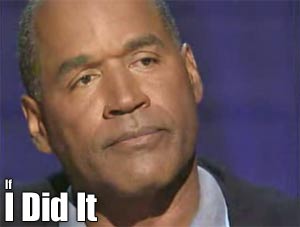 OJ Simpson:It's a very emotional thing to contemplate on.

Judith Regan:I understand. Just tell me, how you think it happened.

OJ Simpson:Let's say there was this guy named Charlie. He's a really bad dude. Pro-athlete, super strong, possibly the best running back of all time and devilishly handsome. He just loves his children, but then he hears that Nicole and her boyfriend Ron have been trying to give his children drugs.

OJ Simpson:Cocaines, cracks, you know the stuff. They sprinkle it on their peanut butter or put it in their Cokes, try to trick Charlie's kids to become addicts and they're also doing all kinds of sex stuff with the kids in the next room while Charlie out earning a living by signing autographs and acting in movies.

Judith Regan:So Charlie is an actor?

OJ Simpson:A, uh, you know what, no he was a musician. So one day he just gets so fed up at all the crap going down at his house he goes out and he buys a knife. A big knife. A Henley Big Buck survival knife from Target. He waits until they're out of the house and together, and it's dark, and he creeps up on them.

Judith Regan:Is that when you attacked?

OJ Simpson:No, I didn't attack right aw-, awwww, Judith, you almost got me. You almost got me. No, Charlie waited about five minutes. They were talking about drugs and sex and each time he heard them say something else he just got madder until he couldn't take it anymore. Like the Hulk or that guy who was a news reporter in that movie. Charlie just busts up out of the bushed and it's all like WHAM-slice, WHAM-slice and their blood is shooting everywhere. The dude, he fought back, but I got him in a back…I mean Charlie got his arms pinned and just tilted his head back with one hand like this so his neck wound pop open like a Pez. Like a Muppet mouth. Just blood shootin' everywhere.

OJ Simpson:Well then Charlie was so mad, he just kept stabbin' and stabbin'. Breaking bones and burying the knife in them. That was when I saw him and I grabbed the knife out of his hand and I said "no way, get out of here punk" and he ran off. That's when I realized my handprints or whatever were on the knife so I threw it away and ran too.

Regan's interview with Simpson demonstrated her skill at showmanship for the purposes of social justice, but it was 2007's interview with Charles Manson that truly emphasized her ability to grapple with an interviewee. Many critics believe that Regan's 2007 Manson interview actually trumped the Tom Snyder interview in which Snyder seemed unable to understand anything Manson said. Fortunately for the American public, Regan and Manson were on the same wavelength. 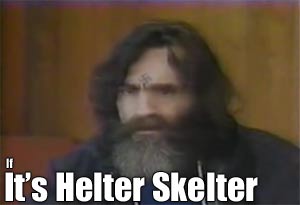 Charles Manson:Helter Skelter. People say I said that, that I say, that it was gonna happen. That Helter Skelter was coming. They laugh on the media and people laugh. Hahahaha. It's funny, okay, see, but Helter Skelter happened. It's happening.

Judith Regan:So what is your theory about the deaths of Sharon Tate and her four friends?

Charles Manson:So like, a killer creeps into the house with a big knife. His name, let's call him "The Juice". He is filled with rage and he's black, black, because this is the start of Helter Skelter. He's come from the ghetto to start the war, my man. He is strong, he's an athlete. He sneaks into the house and he swings the knife and it makes a PLSSSH sound as it cuts her the first time. The screaming starts. Oh man, oh man, it's so loud. She's opening up, blood is everywhere. I can't, I can't! I can't!

Charles Manson:I can't take it anymore! They're dead! They're dying! The blood is in the air, in my lungs. I stop him cuz, you know, you know, he's just cutting up dead meat. Deaaaad meat. I take the knife from him. I take it and I say "begone" and he is gone. That's like, like I wasn't really there, but you know, like if I was that's what I would have saw. This is how it happened.

Regan again stunned the American public, and defied critics who decried her as a hideous vulture feasting on the still-twitching innards of victims, when she managed to land her stunning 2008 interview with former Ugandan dictator Idi Amin. With no explanation, the deposed and belived-dead ruler of Uganda appeared at a Fox studio in California to record a groundbreaking interview with Regan. His book, also released on Regan's label at HarperCollins, was the bestseller of the past five years. 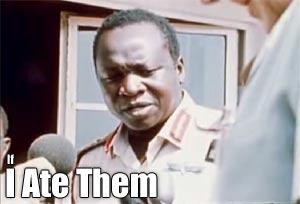 Idi Amin: Yes, I am alive, how about that?

Judith Regan:It's wonderful. Let's talk about the death squads that operated in Uganda between 1971 and 1979. Did you personally control those death squads?

Idi Amin: Emphatically and with absolute certainty, no, I did no such thing. I was responsible for mostly economics and goodwill missions as president. My military, they do what they do to protect me I guess.

Judith Regan:Who was the general in charge of your security?

Idi Amin: The ah, the general, he ah, he had the name of…Charlie. His name was General Charlie.

Judith Regan:Hypothetically speaking, what sort of actions did General Charlie and his death squads undertake on your behalf?

Idi Amin: Would you believe Charlie tied people to reeds and flies a helicopter upside down to chop off their heads? Sometimes it chopped off their bodies too. Another favorite was to tie their arms to the legs of a zebra and tie their legs to the tail of a tiger, then release them. Ha ha, so often the tiger would just turn around and eat the man. It was a very good show. For Charlie.

Judith Regan:How would you respond to critics that believe you cooked and ate victims of your-

Idi Amin: Ah, Charlie was a very hungry fellow. He would cook up their heads and scoop out their succulent brains. Like velvet, like swallowing savory Jello. He enjoyed this very much. Also to bathe in warm blood. Good for the skin. You have not lived until you eat a living man while you bathe in his blood, or so Charlie says. Myself? No. Not even a bite.

Regan still had more than a decade of powerful interviews in her, but she conducted her magnum opus interview in 2009 when she landed an interview with her most fascinating subject yet: herself. Regan ruthlessly interrogated herself for 47 riveting minutes on Fox. No subject was taboo. After more than 30 minutes Regan convinced Regan to speculate on her role in the murder of Television's dignity. 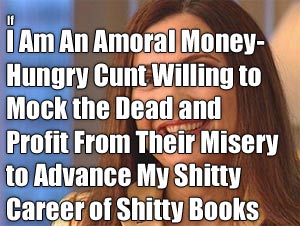 Judith Regan:Thank you for agreeing to speak with me today.

Judith Regan:It was no problem. My pleasure. You look wonderful, by the way.

Judith Regan:Thank you, so do you. Is that a new blouse?

Judith Regan:Yes it is! It's part of Old Navy's Seasonals.

Judith Regan:I will have to see what they have in my size. Alright, first question: Judith, are you disturbed by some of the media attacks on your interviews?

Judith Regan:Not at all, Judith. I think the mainstream media is simply jealous that they are unwilling or unable to commit to groundbreaking journalism. I mean, my 2006 Simpson interview was a watershed moment in the field of two people exchanging words. Before the year was over there were all kinds of copycat specials cropping up.

Judith Regan:What about the critics that claim you are exploiting death and suffering for your own personal and financial gain?

Judith Regan:To be fair, I could understand why they would think that, but I didn't come up with the ideas for the interviews, I just conducted them to the best of my ability.

Judith Regan:Who did come up with the idea?

Judith Regan:There was this guy I worked with, one of the senior managers at HarperCollins by the name of Charlie. One day we were having a planning meeting and Charlie says we should start interviewing brutal murderers that escaped justice and then cross-promote them incestuously on Fox to ensure maximum sales exposure.

Judith Regan:What about the claim that you fucked a cat while intoning a prayer to the Unholy Father?

Judith Regan:Again, Charlie was responsible. As soon as he finished his blasphemous incantation I grabbed the cat off of his boner and threw it out a window. He just went too far on that one.

After this stunning interview, Regan offered Regan an 11.9 million dollar advance on a tell-some book, setting a record for the largest advance a publisher had ever offered to themself. We can look back now and recognize that Regan is a national treasure, but part of what makes her treasure was her willingness to fly in the face of conventions and ignore her critics to create the art, and conduct the interviews, on terms that mattered to her.