I was down in Panama fighting Incinerator Zero, who recently developed frost powers after those Japs shot his crotch with a moon laser. Now Incinerator and I had been slugging it out for the better part of the evening, wrecking the canal to hell and back and all that. But, like all our battles, neither of us had the enthusiasm to keep fighting for more than a few hours. So we called a truce and sat down to lick our wounds and rest. To be honest, I needed the rest. That bastard's frost powers were murder on my sensitive skin.

"You should change your goddamn name, Incinerator. I think you gave me frostbite!"

"Who can think of frostbite at a time like this?"

"Me, because I have frostbite and you gave it to me."

Out of nowhere he asked, "So who you voting for in the election?"

"Who are you voting for?"

"I can't vote, you asshole. There isn't a voting booth in the world that could contain me, let alone one that would have me."

"I meant in principle, dickhead! Who do you want to win?"

"What difference does it make?"

"A hell of a lot! Goddamn, you're one ignorant son of a bitch! That's why democracies never work. There are always creeps like you!" 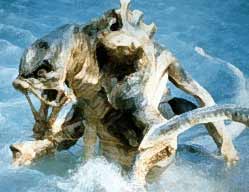 A week after Panama I'm on Monster Island hanging out with the gang, swapping battle stories and gossip as per usual. Like always, everyone was talking about that leviathan whore, Mermadusa. Apparently Horrendicus, the latest sap she laid eggs in, confided that he started having some dysfunction with his tentacles after banging her. Serves him right. Her open waters are like a Bermuda Triangle. Of course this topic was juicy and interesting, so the others had to be assholes and change it to the election.

"All eyes on Florida," said an army of Multron's doppelgangers.

"I swear I'm going to make that peninsula an island if there is a repeat of the 2000 funny business," griped Bog-ra. A threat like that carries some weight when it comes from a giant swamp that's more estrogen than water.

"You know, it's been a good while since I've been exposed to radiation. I want a president who is not afraid to make the most of a nuclear arsenal." I thought I was being sensible. After all, I'm not the only creature that benefits from radiation.

"Don't you care about the environment?" Bog-ra asked in an angry, swampy voice.

"You're a real jerk," Multron said and echoed. "You and T-Ape leveled Greenland, you poisoned Japan's water supply with your urine, and I'm not even going to mention the mess you made in the Grand Canyon after the government pumped you full of tranquilizers."

"I'm just saying these politicians don't represent me anymore. Why should I care about them or their little election beauty pageant?"

"Well," Bog-ra said. "That's why you need to find a politician who does, and give them support."

"Did you hear Horrendicus endorsed Lyndon LaRouche? Apparently they found a lot of common ground."

"You should really take the time to catch up on the issues," Bog-ra nagged.

This lousy planet had been my home for a couple decades now, so I've seen a whole hell of a lot in my lifetime. But I've never seen an election so divisive and heated. I needed to get my mind back on more interesting topics, so I headed down to New Guinea to spend the weekend with Magmatongue, this crazy living volcano bitch Tyrannosaurus Ape hooked me up with. It was great seeing her in action. The way she just basically vomited lava over everybody, it was like poetry. Call me crazy, but women like that are a rare breed. Of course she had to ruin everything by taking a break from vomiting to try to talk to me about - your guessed it - the election.

"Did you ever meet Mr. Universe?" She asked me. "We have much to learn from him."

"Who the hell is that?" I demanded.

"Mr. Universe is a giant robot that serves as a vessel to a containerized universe. All the individuals of that universe decide collectively what to do, like cells in a body, and the robot does it. That's the essence of democracy. It's beautiful."

"Well, yes, he is. I heard he slept with Mermadusa."

At that point I just considered the trip a loss and fled back to the mainland to get to the bottom of this election business. I decided to get a firsthand look at the election by visiting New York, the site of the Republican National Convention. Turns out they were waiting for me because upon arrival, I got blasted in the goddamn kidney by a tank. I felt defeated. Here I was coming to seek knowledge and understanding and for my reward I get to pass some metal kidney stones. Those bastards couldn't even spring for depleted uranium. At least then I would have gotten some pleasure out of the experience.

Taking a hint, I vacated America to visit one of my favorite old haunts, and my biggest personal source of bladder infections. I would still educate myself about the election, but in a worldly manner. An international perspective would be pretty good, I thought, since most Americans just think of themselves. Yep, good old Japan would give me the scope to understand all of the world's problems.

As usual, I stormed the shore quickly and disabled their obnoxious moon lasers. They have a real obsession with trying to give me a sex change, and I'd just as soon leave them unfulfilled. The trouble with those crazy Japs is that by the time you take out one of their damn moon lasers, the bastards have two more aimed at your back. I think those lunatics soaked up more radiation than I did, because something is seriously wrong with a society that decides the best defense is to target the enemy's genitals and digestive system. I give those creeps credit, because after they gave me an impromptu case of irritable bowel syndrome, I was in no condition to knock down buildings. On the plus side, they're going to find a nasty surprise waiting for them at the top of Mt. Fuji. Oh yeah, I went there. 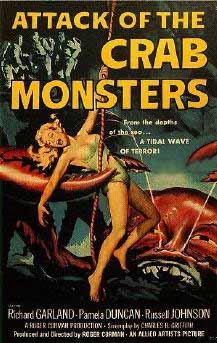 You aren't fooling anybody, Comet Claw. We all know your secret.

Once the IBS subsided, I took a trip to San Francisco, a popular hotbed of political activism. I figured I would have some fun picking cars off the Golden Gate Bridge or maybe turning it into some avant-garde mess. Anyway, the next thing I know, Imperadactyl and his queer friend Comet Claw show up. Imperadactyl is Laserdactyl's little brother, and he's completely fixated on Asian culture. He's never left America, but he still considers himself a defender of Japan. I guess he was pretty pissed about my rampage through his holy land, and as much as I tried to explain to him that those bastards gave me diarrhea, he wouldn't listen. Don't ever let it be said I don't try to communicate before resorting to violence.

The next thing I know, Comet Claw - or Comet Queer as he should be known - is making these stupid pinching motions while circling around me. Obviously the guy's a total fruit, ripe and ready to have some worm squirming around inside him. I don't care what he does in his own time, but no way am I having him force his bedroom habits on me. I did what any rational person would do in this situation: I picked up a boxcar and smashed his carapace open. That nasally bastard screamed "fuck" so loud it was like an obscene sonic boom. Only a shit storm makes thunder like that, and boy was I ever in the center of one.

So now I'm back rehabbing on Monster Island. Tyrannosaurus Ape is here, too, and he's in bad shape. The Portuguese were able to mount a last minute defense against him and save their country. He'll be lucky if he ever gets his sense of smell back, let alone a lot of the fur they burnt off him. Still, he's a fighter and a thinker always, so he'll pull through just fine. 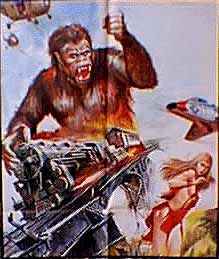 "I'm getting awfully sick of these hu-mans," Ape said in his grating voice. "Awfully sick."

"I hear ya, buddy. They're a bunch of violent perverts."

"If they weren't always shooting at us, they might not be so bad. At least then we could ignore them while we destroy their cities."

"I was reading about the hu-man Ralph Nader," Ape said. "He seems to support reducing the military. That might make our lives easier."

"One more word about the election and I'm going to finish what the Portuguese started!" I said defiantly.

What do I want to see come out of this election? Fuck it. Drop the goddamn bomb already so I can have a decent meal.