To Hell with Me

When the band started to wind down, this one naked guy who was holding up an oversized trumpet or horn or whatever collapsed from the strain. This pissed off some of the animal torturers hanging out, and they just all went nuts on the guy. He jumped up to his feet and I noticed he had a flute sticking out of his butt. I thought that was pretty gross, but then he started playing it and was honestly pretty good. I'm sure that he would have done a lot better playing it normally, but I guess just being a normal flute player doesn't cut it here. You've got to have an edge if you want to stand out in Hell.

Anyway, after his little butt solo I decided to chat him up. I was like, "Dude, I think you've seen the American Pie movies too many times." He looked at me with this really sad, bleeding-eye stare that made me feel terrible. I'm not sure he got the reference. I would have apologized and explained it better, but some random jerk stabbed me in the heart with a knife for no reason.

It hurt like hell, which I suppose was the point. I didn't get a chance to see who stabbed me, but who cares when you're surrounded by hundreds of people with bloody knives. In Hell there aren't really any good Samaritans, so you're on your own when it comes to emergencies. Most people are bleeding profusely anyway, so you can't really blame them for not wanting to help out. 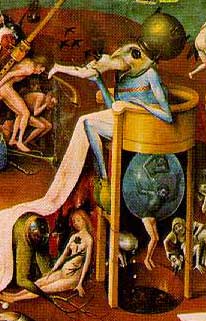 In a daze, I staggered over and joined a long line that I thought might be for the hospital. After about six hours, I finally made it to the front of the line and saw exactly what I was waiting for. There was this massive bird guy with a huge pot for a crown perched atop a toilet throne. I stood there in line bleeding to death to watch a Big Bird take a dump?

To make matters worse, Big Bird was eating people. More specifically, he was eating the people who were in front of me in the line. Naturally, I had no interest in getting eaten myself, so I started to walk off. This creepy fellow with tree branches for arms put a stop to that, and basically shoved me back to the front of the line.

The next thing I know I'm climbing up to get eaten by this fine feathered fruit. Now if I had all my wits and blood about me, I never would have gotten in that line, let alone let a giant bird man eat me. But honestly, I didn't want to ruffle anymore feathers, least of all Big Bird. Seemed like the best course of action was to just get it all over and move on.

In one of the more fortunate developments to go my way, I was swallowed whole. It was all sticky and gross inside him, but beyond that it was kind of refreshing to have some time where I wasn't getting stabbed or threatened with knives. I ended up spending about 50 minutes in his big prolapsed buttsack, which was about all I could get before he started crapping me out. I really wanted to stay longer, partly because it was kind of peaceful, and partly because I didn't want to fall into the hole beneath him. There was a dude vomiting and another dude taking a dump in it. I guess I get why so many people are naked. Clothes just don't last long here.

When you're climbing out of a giant hole filled with human excrement, you kind of hope to see something nice when you get out. That just doesn't happen in Hell. Just as soon as I finished wiping the filth out of my eyes, I caught a glimpse of some guy making out with a hog. I can understand the whole knife obsession, but why does Hell have to be so weird? Half the people have something sticking out of their butts, and it's apparently also A-OKAY to French kiss a pig. If not for the fact I was feeling pretty humiliated from wallowing in sewage and spending an hour in a bird's butt, I might have yelled at him.

I just didn't want to get into any more trouble. Not with my clothes all filthy and my heart still hurting from being stabbed. Besides, the little bird with human legs and a giant helmet with a severed human foot attached standing next to him might have started pecking me if I made a scene. Honestly, in a place like this, I think it's best just to try and stay in the background. Unless somebody is trying to go all Where's Waldo on your ass, you should be able to hide in the crowd. I'll have to ask Lil Egg Dude if he has any tips. He seems to get by pretty well, aside from that arrow going right through him.

Even with all the horrors and heartache, it wasn't all bad. There was one really hot girl with some dice floating above her head that winked at me. She was totally naked, so that was kind of a treat. I'll have to get her number later, assuming she has a phone. Maybe I'll see if Lil Egg Dude will be my wingman.