The folks at Skymall follow a simple marketing strategy: target people when they're weak. Since commercial air travel makes folks fear for their lives, they'll be happy imagining any future on the ground, even one surrounded by the dumbest products on the planet. As part of their probationary restitution, Nick Arizona and P. Jordan Dimebag sat in on Skymall's holiday focus group and produced the following observational log. We hope this seven-part guide aids in facilitating a festive holiday shopping season! Check out the previous guide here: Part 1. 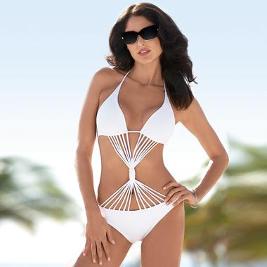 One-piece swimsuit has knotted piping strings to connect the triangle top and bikini bottom. Halter ties at neck and in back. Bottom has 1" sides, Rio coverage. By Aguaclara. Nylon/spandex. Hand wash. Imported. (Skymall)

P: Before the Renaissance, bikini designers had yet to learn the laws of perspective and therefore had no way of accurately portraying Woman With a Distant Sun For a Bellybutton. Instead they'd need a sun-sized canvas with a stick figure drawn in the center.

N: Maybe there isn't a perspective problem and the swimsuit is actually tightly wound around her spine. Either that or a Regal Gutmoth has spun a sturdy cocoon in her midsection and will soon burst forth fully formed, richly nourished by the nylon/spandex blend and her coconut suntan lotion/appetite suppressant.

P: This is pretty much the sexiest accident one can get into with a hammock. My question is, what does the back of this look like? Maybe we're looking at some elaborate sex marionette with 14-point articulation on the breasts.

P: A POV shot of Spiderman copping a feel? A rope handle to help guys pick her up? Maybe what we see is the point at which some guy gave up trying to undress her. He got bored and started playing cat's cradle.

N: Or it could work the other way, as some sort of Chinese puzzle-knot that will loosen her bikini and reveal the secret of her total lack of cameltoe. Seriously, her crotch is as smooth as a shoehorn.

P: She's the Gordian Slut. Though if I were Alexander the Great I'd be worried that cutting her bikini would launch her head like a trebuchet.

N: You don't know the tensile strength of those strands. It could decapitate her, but maybe her breasts would loll out in slow-motion splendor, and her tightly-tucked shemale dick would unfurl in all its hairless, flaccid glory.

P: I'm really unsure of the mechanics at work here. Is it a ripaway bikini? Are those failsafe backups for the lone horizontal string? Maybe she was the sunbather who had her top ripped off in Weekend At Bernie's and was worried about it happening again a dozen times. Does she even want to be wearing this, or is it the eponymous "booby trap"? Someone's going to try to defuse her and they're getting instructions over their headset: "Cut the white string." "They're all white!"

N: That's probably some variety of power crystal hooked up in the middle there, giving her the energy to keep her BMI turned all the way down to "Lara Flynn Boyle." It could all be part of an elaborate hologram or cloaking system. If you cut one of those strings a tsunami of bellyfat would pour forth and the rest of her body would start to shimmer through error phases like A Scanner Darkly.

P: That must be true, because they didn't go directly to the media -- they're in the exhaustively peer-reviewed Skymall. Imagine how the sales of inflatable icebergs and indoor golf greens would plummet were their fact-checking less than immaculate.

N: Yeah, maybe this can't project holograms, but that power crystal has to be used for something. This could be an extreme version of the control top swimsuit, since I don't see how she could feasibly gain more than 80 pounds without the patented "support net" forcibly restraining her bulging gut. If the midsection stretches taut you're probably eating too much, or maybe you're just pregnant.

P: I could see that test giving a false positive. If the bikini is already holding in her excess girth, she's growing dense like a neutron star. Any children found inside of her could have been caught in her black hole bellybutton -- those white lines are fingernail scratches where they clung to her dark matter abdominals.

N: Then it's not an illusion after all; she really does stretch off into another dimension. Imagine the secrets she holds, Twilight Zone-style, in her sculpted midriff!

P: Looking into her bellybutton is like looking into the Big Bang. All of time is contained within her and you can see the history of fashion if you look closely enough. As you fall into the abyss, she looks like a women's suffrage documentary playing in reverse.