Bill Gates: A Man Of Many Jars 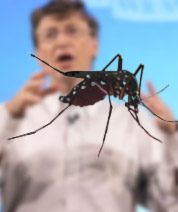 Bill Gates caused quite a stir at the Technology, Entertainment and Design 2009 conference this Wednesday when he released a jar full of actual mosquitoes into the crowd.

His intent was to bring awareness to malaria and motivate influential people who could help to combat the disease. Unfortunately, the bugs did not group together in a formation that read "MALARIA - LET'S DO SOMETHING ABOUT IT" as they had in rehearsal so the point was largely lost.

Surprised? If you've been following Bill Gates' presentations over the years, you wouldn't be. The eccentric billionaire has a long history of punctuating his presentations by harassing the crowd with bizarre and occasionally dangerous props.

At the conclusion of his keynote speech entitled "The Technology Of Future Warfare", Bill Gates calls for his assistant. The unnamed man kneels, presenting his boss with an opened titanium briefcase that appears to be lined with velvet. Gates reaches in and produces a Lazer Tag rifle, one of the white models with the little scope on top.

The world's richest man sprays a salvo of low-powered infrared light into the crowd, killing seventeen journalists and tech industry insiders who chose the wrong day to wear their sensors.

When asked to comment about the incident, Gates expressed remorse for the deaths but was hopeful that more people would think about the issue at hand.

"If a conference room packed with successful people in a first world country can fall victim to the battlefield technology of tomorrow, what does that say about the underpriveleged in war-torn areas like the Middle East and Africa? Those of us who can afford to be charitable need to launch a campaign to tell these third world citizens to remove their Laser Tag sensors - before it's too late."

Throughout a decidedly unenthusiastic presentation of the upcoming Windows Vista, Gates drops a series of "factoids" about shark attacks. Among these dubious claims:

- Sharks do not attack without provocation. Ever. Most sharks die off at a very young age while waiting for a seal/crustacean/catfish assault that never comes.

- In the extremely unlikely event that a shark is somehow goaded into biting you, your best course of action is to punch a different shark in the nose and hope it intervenes.

- If those Jets hoodlums know what's good for 'em, they'll keep away from Bernardo's playground.

Before this confusing speech begins, Bill Gates places a small jar atop a stool in the center of the stage and claims that it is full of sharks. These sharks, he threatens, will be released to prove his point should the audience become unruly.

The jar is glass, however, and all in attendance can clearly see that it is full of jelly beans. It comes as a great shock when Gates absently opens the jar to retrieve a handful of treats and pulls away a bloody stump.

The concerned security guard responsible for tackling Gates to save him from sharks, inadvertently breaking the jar into appendage-cleaving shards, is put on disciplinary leave.

Stressing the threat of biological terrorism in the wake of 9/11, Gates has an inverted centrifuge lowered from the center of the ballroom's ceiling. The device is activated, pelting the entire room with Ricin.

Over three dozen people are hospitalized with broken bones and severe bruises sustained from the impact of some of the larger grains, but no one is killed.

While fielding a question about Notepad, Gates gestures excitedly, knocking over a coffee cup containing a small amount of water.

With professional actor-turned movie star The Rock at his side, Bill Gates unveils the Xbox to the public. The presentation goes along without a hitch for the first fiteen minutes - then it gets a little weird.

Bill hands the console to The Rock and asks the crowd if they want to see what's under the hood. A large portion of the audience who have heard about Gates' antics scream "NO!", while survivors of his previous speeches silently slip out of the building and count their blessings.

Gates ignores the commotion, laughing an empty laugh as an ancient rune reveals itself in the form of an eerie green light in The Rock's forehead. The wrestler seems to be in a trance of some sort, whispering his dark mantra through clenched, blood-soaked teeth.

All in attendance remain transfixed, even as the ground beneath their feet begins to tremble and throb as though a ponderous being somehow larger than the Earth itself is burrowing its way up through eons of dust and bones to meet the temporary flesh.

"What we have here is a Pentium 3 cpu running at 733 MHz, a custom Nvidia graphics processor, and 64 MB of RAM with a memory bandwith of 6.4GB per second. It's all very exciting."