All day, I've been unable to think of anything but John Travolta masturbating angrily while flicking his tongue like a snake. This is mainly due to the fact that the media's been going wild over an anonymous (read: probably baseless) lawsuit that claims Travolta wanted to pleasure off his weird old ding-dong with some male masseuse guy. The suit claims John wanted to crank it off near or with the dude, and pleasure the masseuse's turgid sexpig during that act. It goes on at length to suggest that John Travolta not only wanted to pound off both his and the masseuse's rods, but that he's been at it ever since his "Welcome Back, Kotter" days-- pleasuring and going wild with perhaps many Hollywood rods over the course of his career.

"Blood was flowing to John Travolta's weird penis," said me, "From the sounds of it, he wanted to masturbate off with the man described in the suit as John Doe. His freakish pube configuration was probably disconcerting and weird, and I bet it had a terrible smell." I said a lot of things out loud while writing this article that I'm going to continue quoting, "As Travolta pounded his weird rod, it's thought to have emitted a foul stench. The pubes were probably messed up and nasty. I bet he had some grey ones and I bet his dick smelled like handrail metal, like on a pedestrian bridge. This is how I imagine John Travolta's dick to appear and smell. Yuck! 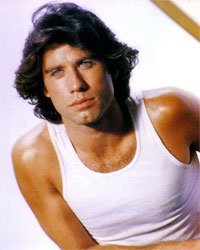 I continued to talk to myself aloud while writing this article and reading other articles about the alleged incident, adding, "His dick is really quite old, and I bet it's had some significant damage done to it over the years. He probably pounds it like all the time, and maybe the skin is weird and like fucked up? I bet he has to moisturize it, a lot. Moisturize his genitals." I added a significant emphasis when it came to Travolta's genitals.

"Remember when he was all dressed up for 'Battlefield Earth' looking like Rob Zombie or some shit?" I sat up straight in my chair. "I bet he jammed it a bunch of times in full makeup. I bet he loved that shit, maybe he even looked in the mirror for it. His pubes were all wild then, too, and braided in full costume. I bet it was a trip. L. Ron probably sanctioned it though, you know that dude was into some stuff, too." At this point I crossed my arms and nodded a bit to no one in particular, "And I bet ol' L. Ron got weird boners, too. Maybe they all jammed them together, like when they were making all that Xenu shit up. Maybe they touched the tips of their things together during all that. Probably, in fact. Whoa.

"I wonder what it looks like," I wondered aloud and looked up to the ceiling, "I bet it looks like a hot dog that's been dehydrating in a heater vent for a while. Actually, maybe it looks like a sausage that someone tried to cook on a car's engine manifold. There's really no way to tell. You know in 'Michael' when Travolta's wings flapped out? I bet his dick was all weird in his pants right then. And he was just waiting to pleasure it off. Dude loved to jam it. Wow.