What If Kurt Cobain Is Spying on Us?

Kurt Cobain's posthumous "solo" album, Montage of Heck: The Home Recordings, is getting largely negative reviews. In addition to panning the material itself - low-fi demos Cobain never intended for the public - critics are questioning the integrity of the release. Like the book Journals, many reviewers feel the album violates the dead musician's privacy and crosses the line into voyeurism.

Such concerns are well-meaning and valid, yet there's one question no one has bothered to ask: what if Kurt Cobain is really spying on us?

It might sound crazy, but consider the following scenarios:

-The Montage of Heck CD contains software that turns your speakers or headphones into microphones, broadcasting your conversations to Kurt Cobain's soul in the afterlife.

-You buy the Nirvana box set, With the Lights Out. To enhance the mood, you listen to it with the lights out. In the darkness, Kurt Cobain sneaks into your closet and tries on your clothes.

-After reading about Kurt Cobain's drug use, you decide to try a shot of heroin. Little do you know that the needle contains tiny nanobots that swim through your bloodstream and attach themselves to your brain. Using a virtual-reality headset, Kurt Cobain can now enter your mind. 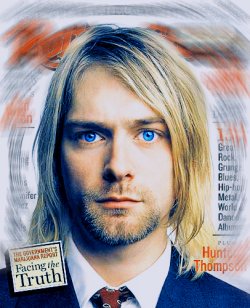 -At night, Kurt Cobain emerges from your vintage Nirvana concert shirt like the monsters in Little Monsters. Quietly, he rearranges the furniture in your room.

-Kurt Cobain's music is actually a way to monitor your movements via echolocation.

-The door to your medicine cabinet is slightly ajar and all the painkillers are gone. Has someone been in your bathroom? Your shut the cabinet door and see Kurt Cobain's reflection in the mirror.

-You're listening to Nirvana in the kitchen when the eggs on the counter start cooking themselves. You open the refrigerator door and see an old man with a Santa hat on a cross.

-When you're at work, your copy of Kurt Cobain's Journals opens itself. The marionette from the Incesticide cover crawls out and rifles through your personal belongings.

-Nirvana's seemingly nonsensical lyrics are really the verbal equivalent of an inkblot test. By reading your posts on songmeanings.com, Kurt Cobain has an intimate window into your psyche.

-You've been in a coma since 1994. All of this is a dream you're having as you lie in a hospital bed. On the opposite side of the room, Cobain and his bandmates stare at your comatose body like in the beginning of the "Heart Shaped Box" video.