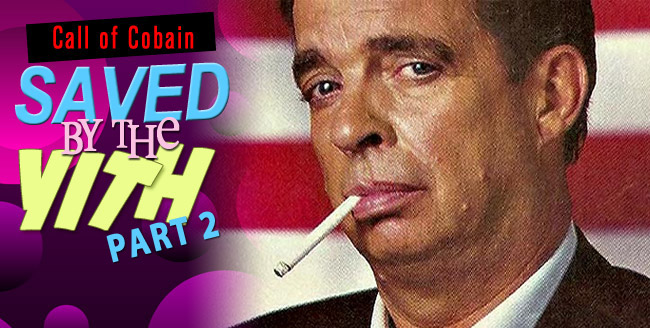 Zack: Okay, here's the situation, we left off last time at the Nickelodeon station. Ninja Turtle ghouls ate the face off Left Eye's pal. Should Cobain fight them? Yeah, of course he should.

Steve: It would be incredible if you could do this whole thing in rap lyrics.

Zack: That was more than enough to strain my credibility. But I rap talked the truth, Steve, Left Eye's contact Leftenant Remo Harris is dead and Kurt Cobain is cornered by the Ninja Turtle ghouls backstage at the Nickelodeon Kids' Choice Awards.

Steve: Yeah, fortunately Cobain has his secret weapon. Remember the one you pulled on me last time? Allow me to jog your memory:

Steve: Kurt will pop those babies out and start disarming the turtles.

Zack: That's not hard because their weapons are plastic and smash apart at the lightest touch. The ghouls seem to be relying more on their claws and hideous snapping teeth. Kurt knocks out Raphael and Donatello, but Leonardo lands a wicked bite on Kurt's arm and Michelangelo shreds Kurt's armored flannel.

Zack: Let's think about this rationally. I mean, really, what martial art is a Seattle grunge slacker like Kurt Cobain going to know?

Zack: Close. As you may recall, he is experienced in the Thai martial art of Krabi Krabong (60%) following his time as a South African mercenary fighting in Southeast Asia. It allows him to wield his tonfa as Mai sok san, incorporating them into a flowing style of brutal strikes.

Steve: Oh, Krabi Krabong is on the sheet. I thought that was a joke or something. Didn't I have him fight ghouls before?

Zack: Yes, he is an experienced ghoul battler, which is why he did not have to suffer a sanity loss when Donatello revealed his nightmarish visage.