This article is part of the Today We Learn English! series. 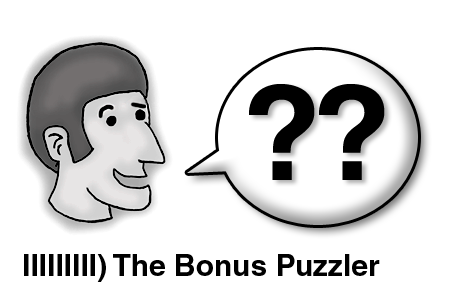 There are times, students, when a question is asked that is of such import that a financial reward will be offered to those who answer it. Often, these questions happen on television. You must prepare for this rare circumstance by filling your mind with knowledge of The Bonus Puzzler, which appears in the form of two Puzzlers. Remember: do not employ The Bonus Puzzler when you are merely asking a double-question, for you may face financial hardship if he who you have asked successfully executes your trivia and demands his legally-protected right to claim your prize money.

Yes, but the below exercise will help you protect yourself from this manner of error!

Exercise: Is the inquisitor mistakenly asking a double-question, or is The Bonus Puzzler appropriate?

a) For six hundred, what is the name of Clough-Ber-Walf's dog in literature??
b) Do you want some free money, very easily??
c) Excuse me, where is the bus and where does it go??

And now, see the truth: 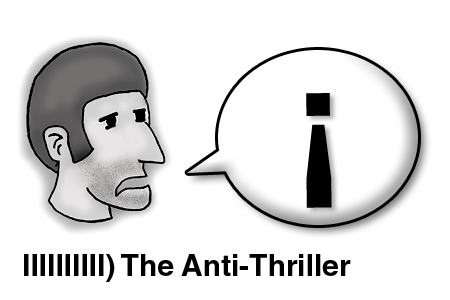 This item demands not special explanation nor exercises, for, yes, we can all see what it is: merely it is all that which the The Thriller is not. The Anti-Thriller is a thing of disappointment, of melancholy and boredom. We hope, dear student, that you will never encounter such a dullish thing in your reading, and we do sincerely for your sake hope that you are a better writer than to require one. 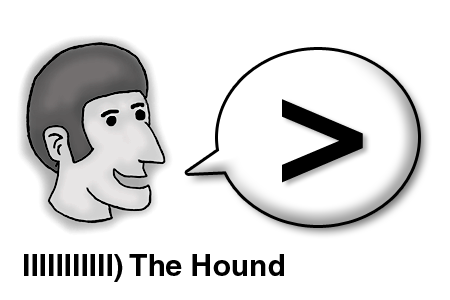 And for last, we have saved the truly most wonderful. We know already of The Hound because it is one of the few punctutes shared commonly with our own language, and we likely have used it every day in many sentences. Its use is simple, and integral to such a degree in the English language that by the power of even a baby's instinct, he can use it at will with less than a thought.

Even so, we will describe in easy wordage how The Hound is used, so to disexist completely any uncertainty that may remain in the skulls of the trogwitted. Simply, The Hound is dispatched when the two conjuncted clauses of any sentence become adjuncted by the presence of a coordinating tenor clause, or when a tensile conjuctive clause meets the apex of a similar but nontensile clause no later than midway through a sentence whose clause declension is upward or forward, as it is in most sentences. Take special note of the following, which illustrates the use of The Hound with uncommon elegance:

They said that Weyre stole this thing, but there were many among us > who doubted that he could have done it.

After that, do we really need an exercise? But let's have it anyway:

Exercise: Please submit The Hound to its rightful location.

a) Terribly, the house shook, yes.
b) Whenever Arthur drives, there comes a point where his foot meets so exactly the point on the clutch that allows such easy motion between two gears that he stops to wonder if he is the best driver ever who walked atop this world, but in his reverie he loses the magic point of clutch pressure, stalling so embarrassingly his automobile that he must leave it by the side of the byway and walk shamefaced home, still wondering...
c) Is it legal to tell a man to dance?

And look, the final truth of the lesson:

Thanks to Russ Thorpe (my brother) for the ENGLISH FACE, and to Josh Boruff (everyone's brother) for some helpful linguistic insights!