District Bulletin: The Reform of Dorroile 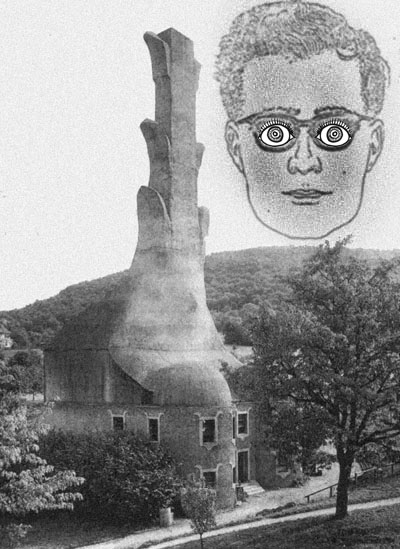 His wide white eyes do disturb.Wait! Nearly passed already though maybe you did, so humble is this notice against the pole and so gentle, please abandon your stride midstep and read this, what you are now reading. Good; and we need not restate, conscientious as you are, that it is not permitted by law to not have stopped and been reading this already, as you have. But even despite that you are required in law to be reading already, we would, even if it weren't, recommend that you do anyway: this District bulletin may be the most important you ever read, assuming nothing more important ever happens, which it may never.
And here is why. Dorroile, man of our District, has long been regarded as the worst guy. His lewd scandals, ribald grifts and unsavory pranks have humiliated us, according to our conservatively estimated tally, over thirty-seven hundred times. And this is not even accounting his juvenile scandals, of which the many files have been sealed, because a youngmartin Dorroile locked them into the car of Rog Bestly, former Superior of Education, and pushed it into a floodlogged quarry. Oh, believe it, how Rog loved that car, and how he loved being dry before he dove in after it (and fruitlessly). The gravest insult within this anecdote will now be related: youngmartin Dorroile, so wily despite his age, could not be prosecuted for the act due to a lack of evidence; so cunningly, he endeavored just before the deed to write a full account of his impending crime, have it notarized by an incredulous Rog Bestly himself, file it within his juvenile offense index, lock it in that very same car and push it into the quarry along with all the others. Rog, beaten and sopping, resigned his title. But Dorroile had not taken his dignity-- until two weeks later, in an unrelated incident.
No! But this is not the topic! If we sought to fill our bulletin with naught but infuriating Dorroile anecdotes, which so often we do, we sure could without running out. But this is not the topic.
So, here is what is: Dorroile now pretends an air of reform, or is reformed. So sweet and boyish acts the once-worst guy, no longer with his awful slapping dance and his law-crooking jokesmanship. Where once his every act was a base parody of our District's decency, now he affects helpfulness, or is helpful. He credits his reform to our new god, the bunnysoft moon-dwelling cookie bear Swimp, and so smilingly does he insist that he is not joking us with his ugly satires, that he is no longer a jokesman.
Instead of his bad gross dance, which once made cats faint and ladies hiss, he entertains children with balletic interpretations of the Rituals of Swimp. Instead of scandalizing the fish in the aquarium with his grotesque glass-pressing squashfaces, he now weeps joyfully at the sight of them, and then writes down suggested names for the fish on a clipboard and hands it to the aquariubrarian for review.
How, but, after all this time, can we trust his smiles? Your superiors suggest that Dorroile, for all his kind smiles and overbearing courtesies, must still be afforded the wariest of regards. To illustrate the need for caution, we present to you these evidences:

Exhibit A: Six days prior to the writing of this bulletin, your Claude Fantsy, Head Better Superior and sworn former enemy of Dorroile, was ambulating in the direction of the doorway to our beloved Weep of Desperation. Dorroile, who has taken to loitering helpfully around the civic building and offering very sincere compliments to all who pass him, espied the approach of Hbs. Fantsy from some distance off and swung wide the door to allow him in. Hbs. Fantsy felt his heart lifted by the Swimp-inspired love shown him in this act, and ambled in uninterrupted continuance toward the door. But when he arrived, though Dorroile was still holding it, the door was not quite ajar enough, and Hbs. Fantsy was forced to angle his body slightly in a sidewise inclination in order to come through. Had Dorroile, still smiling but with imperceptible and deliberate movement, taking full advantage of the distance Hbs. Fantsy needed to cover and the time needed to cover it, very slowly and unnoticeably closed the door slightly from its original wide-swung position, thus causing Hbs. Fantsy to nearly brush his shoulder upon the doorframe? If so, what sick motive could possibly account for so inscrutable a satire?
Exhibit B: Famously, Dorroile, in his long tenure as the worst of guys, was never seen to open his eyes. This, many have theoried, was the uncanny crux of his menace: how did he see to commit his many crimejests and heinims? But now, as he does good, his eyes are open, unblinking, always wide and so white-- but are we comforted? No: doubly are we menaced by his moonlike staring eyes, because they are too white. While the eyes of your superiors are even still pink and bloodshot from the many tears and wakeful nights Dorroile has perpetrated upon them, the former cocklaw himself endures none such sorrow-- his whites have been preserved in a condition most pristine, from never having been opened before! Why does he not close them again, so we might face the familiar evil of his sightless horror, rather than the fresh hell of his milk-white orbs? But can we rationally accuse him of wrongdoing? Does he joke the law by not keeping his eyes closed, like we hated how he always did for so long before? If his intent is to be awful and scary, he is succeeding, but he specifically denies it and says he never kept his eyes closed before in the first place.