The Fable of Tooth Tooth and the Whiteling

And that reminds me, god: you heard about Tooth Tooth and that white child? Interesting development, god. A year ago I might not believe some shit like that, even straight from Tooth Tooth mouth, but now I ain't gonna question anything, what with these strange-ass times.

Tooth Tooth and a white child? You can't be serious, god.

Word is bond. Truth be told, cousin, I'm surprised you ain't heard of this shit sooner, at least the historical backdrop of this shit. You ain't ever heard about Tooth Tooth finding that child on his doorstep? 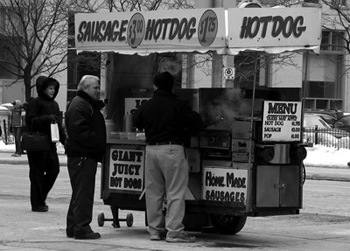 About ten years ago--nah, must be close to fifteen cause this is right after he won that lawsuit--Tooth Tooth was ensconced in his shack for a week on a fast. This was a Friday, so ordinarily that boy would be out gallivanting and carousing with his boys, but he went through those few years when he got in the habit of fasting. You recall that shit, god? One day he like, "son, how many times a day you smell the white man cooking swine?" And I be like, "countless times, god, on account of I pass all them hot dog carts whenever I was anywhere." And Tooth sat back to contemplated this for a moment, you could tell he be contemplating because that one crooked eye of his slot over into the lazy position, no disrespect.

And he said to me, "son, each time you inhale the fume of a swine, let us consider this equivalent to eating one five-hundredth of a morsel of swine. Do you follow this logic, god?" And I go, "shit, you might be right, god." So after that, for a few years, Tooth Tooth went on these fasts for a few days a month to cleanse himself of any swine particles he might inhale, and he even train his body to create calcified swine precipitate that leave him when he pee. He strain his pee during the fasts and collect all that shit in a jar, and this jar of particulate swine represent all the evil of Yacub and the swine-tasting white man. That shit is why sometimes when he get mad, you hear him talking about the jar under his breath.

I heard a rumor that a white man stole the jar of swine precipitate and smoked that shit, and that white man was Dirk Kempthorne, a motherfucker who would later become Secretary of the Interior. Think about it. But I have no idea if that shit is true, god, but it's true in the poetic sense.

But eventually Tooth was like, "shit, maybe instead of fasting, how about I just hold my breath when I walk by them carts," so he only did the fasting a year or so until he thought of that, and of course he eventually bought all them carts and had that shit converted to mobile libraries of righteous literature for the youth, plus beers for they daddies.

So like I was saying, on this particular Friday, Tooth was on a fast, and he was reclining in his shack reading the poetry of Keorapetse Kgositsile and enjoying the affections of a fly Chinese bitch, as even then they did tend to sneak into his manor by unknown means--perhaps spiritual means--due to their unexplained sexual fascination with him. And suddenly he hears a ring at his doorbell, which is tuned to play the notes of Unchained Melody as an ironic commentary on that lawsuit he won, and he opened up his door to find a mysterious basket, but ain't nobody in sight.

At first Tooth was wary about that shit, so he cannily asked the Chinese bitch to smell it for the scent of gunpowder, because they know that smell due to their culture. But she ain't detect anything dangerous, so Tooth bring that basket inside and unswaddle the parcel within in it, and to his horror he discover a living baby whiteling.