EXPECTATIONS: Movie nerds know director Wally Pfister as Christopher Nolan's go-to cinematographer. He's the guy who made Batman movies finally look like real movies. But to movie studios and the people who cut their trailers, Transcendence comes from "Director something or other, award-winning blah blah blah of Inception." I expect this will look every bit as good as anything Christopher Nolan has directed, but the real question is whether there's enough substance here to match Pfister's style. I'm hoping so.

REALITY: Science fiction has a long history of shining an apprehensive light on new technology by making incredibly stupid movies about it. Ever since the mid-'90s, films like Virtuosity and Hackers have portrayed the internet as a dangerous totalitarian hellscape governed by a collective will to destroy anything that isn't the internet. That's basically the world in which this film exists. Transcendence desperately wants to be a philosophical story of the crossroads where life and technology intersect, but it's hijacked by a hundred idiotic action movie cliches which send it into a fiery crash at the bottom of the Uncanny Valley. 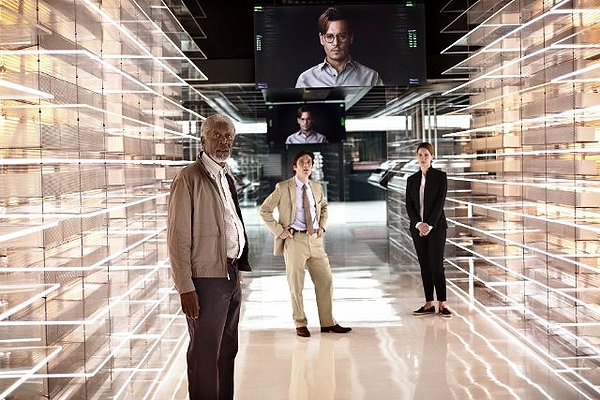 One day they'll make a computer that is so small you can carry it around in your pocket.


Dr. Will Caster (Johnny Depp) is the world's leading expert on artificial intelligence. When he's shot in the stomach by a technophobic assassin, Caster's wife, Evelyn (Rebecca Hall), and best friend, Max (Paul Bettany), do what they must to save him. They meticulously upload his consciousness to a computer mainframe, which once again raises the ire of the guild of technophobic assassins (led by Kate Mara). When they kidnap Max, Will convinces Evelyn to move their operation to the desert. This is where Will makes miraculous breakthroughs in nanotechnology, but soon must face off against the people who tried to kill him. Teaming up with FBI agent Buchanan (Cillian Murphy) and Will's mentor, Joseph (Morgan Freeman), the technophobes must stop Will before his programming infects the entire world.

If it isn't immediately clear who the main character of this film is, that's because this is something the film never makes clear. The first half-hour is laser-focused on Will and his desire to keep on existing, no matter the form. Once Will becomes the internet, the focus shifts to Evelyn, who spends much of the next hour building what she thinks is a new life for her computer husband and herself. Interspersed among all this (and in fact bookending the entire film), we follow Max, whose own story finds him pondering the greater implications of what his friends are doing. There are plenty of avenues for Transcendence to explore, if only it actually explored them instead of taking quick glances as it passes them by.

After he's just been plugged into the internet, his mind streaming halfway around the world and back in a nanosecond, Will tells his wife they're in danger and that he needs to "get off the grid." It's hard to tell whether this line comes from a character who doesn't fully grasp his situation, or from a screenwriter who never stopped to consider how monumentally dumb this sounds. The answer probably lies somewhere between the two, but Transcendence is littered with inane technobabble and potholes of logic like this that pile up to make an incredibly dumb movie about the world's smartest people. 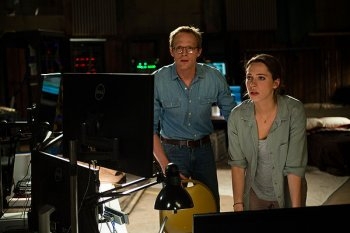 Concerned Brits watch on, mouths slightly agape.It doesn't help that Depp clearly saw this film as an opportunity to wander onto a set without wearing any pants. For most of the film, we only see him in a medium shot on a computer monitor. Depp reads Will's lines as though it's naptime for the internet. Musing on his desire for more power would be menacing if Depp didn't sound so much like a sleepy basset hound. Once again, I'm stuck asking the question of who the villain of this piece is supposed to be. Is it Will? Because if so, he sure doesn't act like it.

To frame it in the context of a series this film cribs a lot from, whether it knows it or not, Transcendence is a Terminator film in which Miles Benedict Dyson becomes Skynet. In the Terminator series, Skynet goes into kill-mode the moment it's switched on. Even though this film never spells it out, that's the nagging fear underlining everything that happens in Transcendence. As the plot develops, it begins looking more and more like a ponderous remake of Rise of the Machines.

What Will's consciousness will do when his nanotech spreads across the globe is the question that drives the second half of the film. However, the moment the film stops to consider that this could actually be a good thing, the viewpoint switches and suddenly we're on the side of the technophobes. It seems to do this for no other reason than to let us have a big climactic action scene where things go kerblooey.

That's really the issue with Transcendence in a nutshell: For all of the cool, futuristic technologies it puts on display, the film can't decide where it stands on any of them. The internet is a wondrous tool for exchanging information, but it can also be used to game the stock market for millions of dollars in a split second. Artificial intelligence might be the key to transcending death itself, but it could also turn people into megalomaniacal robots bent on consuming the planet. Nanotechnology might someday cure diseases and even revive the dead, but it also might turn people into the Borg and destroy all semblance of free will.

Who's to say? The process of transcendence is actually being developed as we speak, so maybe we'll have the answer to some of these questions sooner rather than later. Then again, the last time a movie uploaded someone's brain into a computer, it tried to murder Captain America. And since Transcendence comes across like a movie written by a grandpa who smashed his iPhone after it dropped a call, maybe we should just put uploading brains on the backburner for a while.