Wednesday, Dec 06, 2006 by Dr. David Thorpe (@Arr)
"Hey," a lot of people have said to me, "you never make fun of metal. Does that mean you like metal?" No, it means I can't fucking stand to listen to metal long enough to make fun of it. 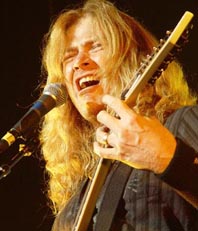 A really horrible person in the process of making bad music for idiots. I tend to scoff at those unfortunate philistines who utter things like “rap isn’t real music,” or “R&B is pure crap.” I tend to scoff at a lot of things, but those guys get deep scoffs, from the diaphragm. Genres are far too broad and diverse to be encompassed by such generalizations, right? I want to believe that no genre is inherently bad; most of them are quickly ruined by musicians, but the genres themselves contain some spark of an ideal that can’t be corrupted. I try to make myself believe that, but one thing always gets in my way: heavy metal.

I’ve never found the metal counterexample. If there’s one metal track out there that disproves the notion that all metal is complete fucking crap, I’d absolutely love to hear it. I would rest easy for the remainder of my days, comforted by the knowledge that my jolly, populist theories about music were confirmed. I’ve been searching for a non-horrible metal song like the Holy Grail, but whenever I find a cup to drink from, my face melts off like the Nazi in The Last Crusade.

And no, metalheads, I’m not referring to the awesome power of Dragonforce’s face-melting riffs. You’re an idiot.

(Let me define my terms here: bluesy hard-rock protometal like Zeppelin or Aerosmith is not what I’m talking about; that sucks for overlapping but nonidentical reasons. Nu-metal and rap metal are arguably even worse than vanilla metal, but they’re not the subjects of this article. Particularly, I’m referring to anything from Iron Maiden onward: 80s British shit, thrash, death metal, black metal, power metal, et cetera ad nauseum. Maybe not hair metal; in retrospect, it had its moments.) 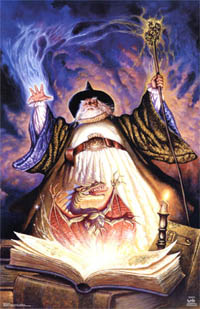 What metal looks like to me. But in my futile longing to grasp that modest chalice, I’ve suffered quite a bit of metal. I used to think it was my fault that I found it so unfathomable. I wondered if some mental defect kept be from enjoying this vast cornucopia of music, from the troll-worshipingest death metal to the sword-swingingest glory metal, and everything between. I couldn’t understand Pantera, I didn’t get Iron Maiden, and I couldn’t fucking stand Metallica. As I grew older and more confident in the fact that most people other than me are idiots, it became clear that the defect wasn’t mine.

In all these years, I haven’t seen a single satisfactory shred of evidence that heavy metal doesn’t suck completely and utterly. I haven’t heard any metal band isn’t composed of stunted adolescence, half-assed rebellion, tongue-in-cheek stupidity, masturbatory pap, tuneless dirge, juvenile morbidity, retarded sexuality, or some nauseating combination of those elements. I haven’t heard a single defense of its artistry that made a shred of sense. I haven’t heard a “serious” metal song that didn’t sound comical. I haven’t heard a fantasy metal song with anything fucking interesting to say about dragons. I haven’t heard anything, seen anything, read anything or met anyone who could convince me that metal, as a whole, is not artistically bankrupt, direly uncool, and irredeemably fucking dumb. Not most of it. All of it.

It’s based on a kind of stupidity that I find impossible to comprehend. It looks and sounds so fundamentally opposite to art that my brain reels when I even try to consider the idea of enjoying it. It’s so incomprehensible to me that I sometimes get the feeling that it’s all a huge joke that everyone else is in on but me. 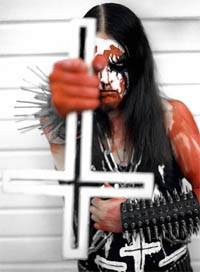 Oh no, you've offended me.It may seem like I’m shooting fish in a barrel here. Metal is, with a few exceptions, critically ignored and popularly derided. Aside from holdover metal stars like Metallica, the above-ground music press couldn’t give a single shit about metal; it’s music for misfit nerds, sociopaths, big-haired whores and mulleted heshers. Cool wouldn’t touch metal with a ten foot pole, and metalheads are so hopelessly uncool that they’ve developed their own laughable little chic around leather and headbanging. Despite all this, people continue to defend metal as an art and a lifestyle. Even people who “don’t take metal seriously” often take it really fucking seriously.

I consider myself a public servant, so it always fills my heart with pride when I turn someone away from their shitty taste. Unfortunately, this article can’t do that. Metal fans are simply too entrenched in their own art-killing quagmire to be swayed by any rational argument. Their synapses are too brutalized by bluntness to recognize subtlety ever again; real music may be forever useless to them. I’m not asking them to stop listening to metal. I’m asking them to shut the fuck up about it forever.

I only say “pretend” because “realize” might be too strong a word for these hopeless dorks.

Anyway: just leave us alone, weirdoes. Don’t even e-mail me to complain about this article. In fact, let me deflect some points you’ll try to make:

Millions of people in around the world love metal.

You just don’t understand the appeal of metal.

No, I don’t, and I’ve become content with that. I don’t understand the appeal of dressing up like a baby and pooping on oneself, either, but tons of people love it, and I don’t give a Texas shit why they love it, and their explanations will fall on deaf ears. Like metalheads, adult baby dudes are just plain broken in the head, and I don’t need them spreading their creepy pathology.

The metal genre is home to some technically talented musical virtuosos.

I have to laugh when I hear metalheads complain that some of the best pure musicians of our time are being ignored and neglected by the ivory-tower establishment just because they play in the metal genre. Here, it’s simple: imagine if William Butler Yeats only wrote poems about dogs eating peanut butter, and if he used only the same fifteen or twenty words in every single poem. People who espouse the shredding merits of metal guitarists and the double-bass technique of metal drummers crack me the fuck up. Maybe they also think books are better when they have lots of pages.

Symphonic metal is extremely sophisticated and carries on the tradition of classical music.

I enjoy metal because of its dark, creepy, intense aesthetic.

You have a mental age of thirteen. If your brain doesn’t process metal aesthetics as purely comical, then you’re truly beyond intervention. If you have even the smallest scrap of respect for any aspect of metal music, lyrics, fashion, or album cover art, you are so aesthetically stunted that you might as well be a spotty junior high kid drawing barbarian dudes with battle axes and huge tits on your trapper keeper. If you love metal for its capacity to shock old people and oversensitive Christians, you’re an immature halfwit who thinks that offending people is the same as making a point.

I just like the way it sounds. You can’t say your taste is better than mine, because it’s subjective.

Metal is so awful that it goes far beyond questions of taste. Liking metal is a mental illness, although I'm sure you'll wear that accusation with pride (don't). It makes me wonder what the fuck your parents did to you. You’re sick and I can’t cure you, so don’t waste my time.

Search deep within your soul. Is there any part of you that takes metal seriously, even a little bit? Have you ever purchased a metal album with real money for any reason other than to laugh at it? Is more than 20% of the music you listen to metal? Is there any metal band in this world that you care enough about that you’d be sad if they broke up or died in a fiery car crash? If you answered “yes” to any of these questions, please reevaluate your taste before it’s too late.

As a frustrated and troubled youth, the metal community gave me a place to fit in.

Most of the worst subcultures in the world (gangs, cults, internet forums) thrive on accepting the lowest members of the social food chain. The fact that you were insufferable to anyone but metalheads doesn’t mean that there’s anything good about metal, it just means that dweebs tolerate other dweebs out of necessity.

I like metal, but I’m not a nerd or an idiot.

But here, listen to THIS metal song. It’ll change your mind.

No, dickhead, it won’t, and I resent the very fact that you think I might enjoy it.

What about Ronnie James fuckin Dio? You can’t deny the ROCK.

No. Stop. You’re embarrassing yourself.

I hope I’ve made myself perfectly clear. Questions or comments regarding metal can be sent straight up your ass. Anything else can be sent to davidthorpe@somethingawful.com.