Wednesday, Jan 03, 2007 by Dr. David Thorpe (@Arr)
Every year, a curious thing happens: it stops being this year, and suddenly it’s next year, except that instantly it’s no longer next year, but this year instead, and this year has become last year. This, once again, has happened. We now look back over the worst music of this year (last year) for the annual World’s Greatest Dad Awards. 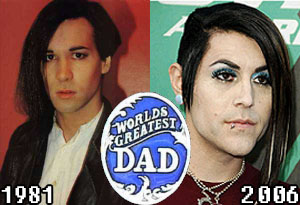 When AFI bubbled up from the bottom of the pop-punk barrel in 2003 with their ridiculous Emo-Goth reinvention, Sing The Sorrow, lead singer Davey Havok (maybe not his real name?) traded in his dipshit Misfits ‘do for a flowing mane of black Gothy girly-curls. In that innocent age, before 2005’s bejeweled grill explosion, it didn’t take much effort for Davey to be the most ridiculous looking dude on MTV. But times have changed.

For AFI’s big comeback in 2006, Havok one-upped himself spectacularly: he traded his bruised eye shadow for baby blue glam glitter and replaced his greasy black locks with the most horrible haircut that the human eye can possibly hope to witness. I don’t even know how to describe this thing. It’s kind of like Phil Oakey’s asymmetrical Human League coif, but robbed of the foppish 80s futurist charm. We’re in the future now. We’ve got flying cars and computers in our watches and shit. And our hair does not look like that. Davey’s hair looks like a pelican wing in an oil spill. It flops and flails around like a shampoo commercial about flaccid dicks. It’s deeply embarrassing to behold; just seeing a man with that haircut is like walking in on a guy cleaning his butthole with a q-tip at the sink of a public restroom, with one foot up on the basin and everything: you’re like, “whoa, give me a break, that just can’t be necessary,” and you back away hastily and hope to avoid seeing it again forevermore.

Runner Up: The Killers

Beard = credibility, or so Brandon Flowers hopes. The superficial artifice of maturity can’t hide the fact that you’re the same jerkoff from before, but with the Springsteen dial set to “medium.” 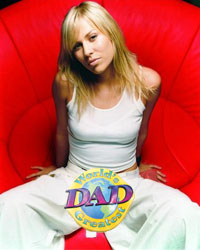 Thanks for the dismal high school flashbacks. Natasha Bedingfield – Unwritten & These Words

Anybody who’s ever taken a creative writing workshop in high school or college has had this same experience: some flustered doofus gets up there to present his story, and it begins with something to the effect of:

“He sat before the blank page, unable to think of anything to write. His story was due the next day! What could he do? He picked up his pen and started to write, letting anything and everything in his brain flow forth, and—“

Of course, if your instructor was worth half a damn, this is about the point where he or she stopped the proceedings and said “no, that’s not clever, that’s completely goddamned stupid, and nobody in the world wants to have their time wasted with something like that.” But most instructors aren’t worth half a damn, so you’ve probably had to sit through the whole thing a few times.

When first I heard Natasha Bedingfield’s “These Words”— or maybe it was “Unwritten,” who knows, they’re the same song— I had immediate flashbacks to that kind of scholastic nightmare. Some illiterate clump of hair who thinks she’s clever was bombarding me with that same horror in song. I present some example lyrics from “These Words”:

Great, a song about how you can’t write a song. I agree. Now get your sorry ass off my radio. But it only gets worse: her next single, or maybe it was her previous single, who the hell knows, pulled the exact same cheap stunt. Here’s “Unwritten”:

I am unwritten, can't read my mind, I'm undefined
I'm just beginning, the pen's in my hand, ending unplanned
Staring at the blank page before you
Open up the dirty window
Let the sun illuminate the words that you could not find

Natasha Bedingfield’s mental impotence is not interesting to me, and neither is her music, which is 100% production and 0% not crap.