Nitebreed, submitted by Al. I'm not even sure where to begin explaining how absolutely terrible this website is. From everything I can gather it is dedicated to a couple of retarded punk kids who have a band called "Nitebreed." They are now enjoying the soaring heights of fame by having a few of their gut-wrenching songs on mp3.com. If you can make it past all 3,578 pop-up windows that you must successfully navigate before entering their lavish site, be sure to check out their photo gallery. 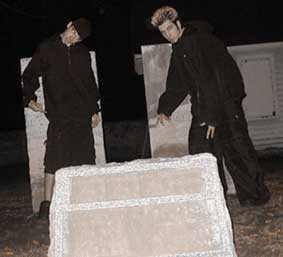 In 2000, a local rapper named Kount C released a Cassette Single entitled "Night Sightingz." He also did rap & rock projects before Nitebreed, which all flopped on their asses. "Night Sightingz" got nothing but negative reviews. Depressed & Fed Up, Kount just said fuck it. In mid 2001, Kount C started promoting something called C.N.B. {Cryptic Night Breed.} Pretty soon, everyone knew about The Cryptic Night Breed. Shortened to Nightbreed then to Nitebreed, Kount C along with HomiSide met up with rappers & engineers Shock Therapy (Raptor & Death Child.) Kount C knew the dissipointment of trying and failing musically, so they decided to release one or two songs to the public, and if good feedback was recieved, then they'd keep going.

WHY OH WHY DID YOU KEEP GOING? Thank goodness they have no live shows because they are waiting to finish their stylin' album, "The Occult" with tracks such as "Scare U 2 Death" and "Hellevation." These fine gentlemen also have an inviting forum in which you may participate IF YOU DARE! 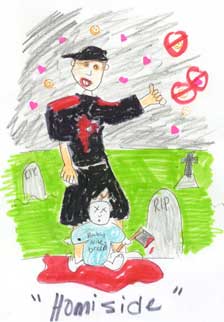 Whatup everybody~ I'm str8 just chillin. About to bounce out on Vacation. But this shits not about me, its about NB so i'll shut the mutherfuck up. STREET TEAM NEWS Alright.. FUCK YOU! I know its been talked about so much.. i swear that shits comin along. THIS FRIDAY ALL STREET TEAM PACKAGES WILL BE SENT OCCULT = SOON That shit will be in your hands soon. Release date is coming within a week or 2.. This shit is gonna flip your fuckin wig~ this shit is so fuckin dope. No ones gonna be let down. Well thats all til next time...Happy Independance Day Bitches~ I'M OUT THIS PIECE, VACATION TIME MUTHERFUCKER~! I'M OUT TIL TUESDAY!

Please let "Tuesday" actually be code for "I am leaving now to be run over and killed by a cement truck so don't worry, you will never have to hear my shitty music or listen to my foul drivel again." NITEBREED ROX!