Riley Martin... visits his alien friends on their mothership in

Tuesday, Jul 09, 2002 by Rich "Lowtax" Kyanka (@TwitterHasBannedAllMyAccountsEver)
Know of an awful site? Send it to us and become a hero!

Riley Martin... visits his alien friends on their mothership in, submitted by Deep6Records. TAN IS COMING! TAN IS COMING! Break out the fine Chinaware and the fancy lobster bibs because some space alien named "Tan" is coming to pay us a visit and do whatever the hell he plans on doing, like giving us Easter candy or being a pro football commentator. If I were you, I'd put on your nicest tinfoil hat and prepare for the incoming love! 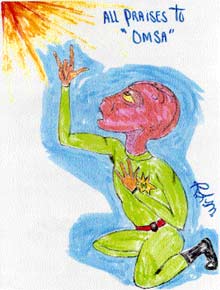 A child or animal cannot enter the disintegration chamber. Should a child attempt to enter, the eye of the computer duly records the attempt and someone is dispatched to investigate the matter. If the child attempts to enter again, he is allowed into the chamber and is simply held until the authorities arrive to pick him up for tests. Should a child or other non-terminate status person opt to kill themselves by some other means or meet with accidental death, the sensors will also record their death, even though it did not have the power to prevent it. Since the gender of all children born on Biaveh is left to chance, more females than males are born, so males are valuable, pampered beings and polygamy is standard. However, if a male has more than one wife, the average is about four, he can only produce one offspring to each wife beyond the two children to the first wife. By law, each wife must have a separate residence of her own, apart from her husband's and the other wives. In most cases the wives' homes are built in a circle around the husband's house, which is in the center of a wagon wheel configuration. The children are common property and have free run of all the houses. Actually the children are spoiled rotten, even by Earth standards, and are prone to manipulating the parents, as are all children. Strangely, a woman does not have to go through any legal procedures in order to leave her husband, but is required to inform him of her departure via computer before or after the fact. The divorce is duly recorded. Should she decide to return, she needs only his permission. If he refuses, then she can take him to court. Infidelity is not legal grounds to prevent her return, but refusing him her sexual favors is. Her inability to bear an offspring for him is not grounds to prevent her return, but her refusal to adopt is. And like Earth customs, in a separation, the child generally remains with the mother, and so do her personal servants and companion robots, since their programs have become closely attuned to her wave lengths.

Oh ye'marvels of creation, why have you not sought the light:

Must you fade into the shadows, of that still, cold azure night.

Unto you my sign is written, there upon the living fields.

Lo' the circle is eternal, though you perish, you yet shall live.

What the hell...? That doesn't even rhyme correctly, goddammit! How the hell am I supposed to get all hot and bothered about some retarded alien coming to visit us when the fucker can't even write poetry that rhymes? Go back to Russian Mars you commie pinko alien!

PS: Feel free to pay $25 and buy a book detailing Tan's plans. I am, of course, assuming you are stupid.