Niklas and Friends, submitted by Saint. I think we've told you how rotten the Internet is at least a thousand times already, and we aren't joking. Well, we're doing it again because it's our civic duty as civilized beings. Today's awful link single-handedly invalidates the usefulness and potential of the Internet, past, present, and future. Niklas and Friends is quite possibly one of the worst comic strips out there. It centers on a group of young boys who readily engage in homoerotic activities, constantly prance about in their underwear, and do all the things you would want young boys to do if you were a sick goddamn pedophile and member of NAMBLA.

I like to show real close friendships, that kind of friendship that boys use to have as long as they don't care about girls. Niklas and his friends don't lie, they help each other when they're in need and they never hurt anybody. You have to be upright if you want to get friends, that's my message. A lot of people start missing this kind of close friendship when they grow older, even if they never had such a close friend. My cartoons may help to revive that feeling. The older you get the more you'll miss it.

Allow me to translate what he just said: 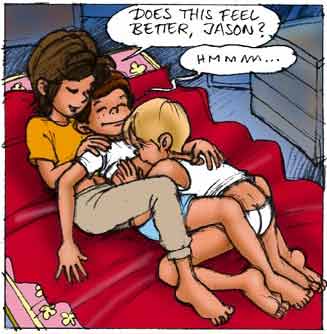 I think that about sums it up pretty well.

Golly, I wonder who would appreciate drawings of half naked boys humping each other. Certainly not THE WRONG KIND OF PEOPLE. I think it's time the government step in and take the Internet away. We've abused it and we don't deserve it anymore.