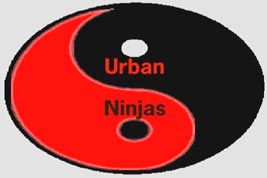 Overview: After a casual acquaintance is murdered, two karate-teaching brothers embark on a mission to annoy a local crime lord.

The Case For: No animals were harmed during the production of this movie.

The Case Against: Essentially a failure on every conceivable level you could imagine for a movie that's basically a rip-off of Double Dragon. Also, I was just guessing about the animals.

It's hard to know how to begin describing a movie like Urban Ninjas. Should I compare it to other excrementitious ninja movies, such as Pocket Ninjas? Should I describe the depths of my hatred for writer/director/producer/editor/star Vince Bowman? Maybe I'll just get the ball rolling by giving you an experience you can use for comparison. Have you watched a movie, and then halfway through found yourself rooting for the bad guy, because the bad guy's a lot cooler than the good guy, and even though his plan would mean the complete destruction of the free world, you still want him to pull it off because you're sure the totally awesome evil speech he'd make afterwards would be worth it? Watching Urban Ninjas, I had a moment much like that, except that instead of rooting for the bad guy, I was rooting for the scenery. Go, Apartment Building, I thought, collapse and kill all the actors so I can go do something else! Sadly, my wish never came true, so we might as well get this show on the road. 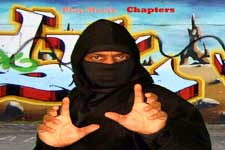 Let's face it, the DVD menu is already funnier than anything you're going to read in this review.Before we even get to the movie, the jam-packed Urban Ninjas DVD treats us to some amazing previews, including one for a stand-up comedy special claiming to feature some of BET's brightest stars. I'll openly admit, I don't watch a lot of BET. It's not that I don't have an interest in black culture, it's just that if I want to watch reruns of Moesha and commercials that make Boost Mobile's "Where You At?" campaign sound like Shakespeare in the Park, I'll just kill myself, since I assume that's what my personal hell would be like anyway. Even so, I have some trouble believing that "BET Presents: Drunk Guy Who Calls People 'Niggas' Until They Laugh Nervously While Shifting In Their Rented Metal Folding Chairs, Live from the YMCA Basketball Court" was one of the network's biggest hits.

Aww, they're a cute couple.Sadly, the previews lead into an actual movie, and that's when things really take a hard turn off the Passably Bad Freeway and onto the Oh God Why Onramp. It took some major effort to get past the horrible sound quality - imagine a Bengal tiger chewing on a bucketful of combs for eighty-five minutes and you'll get the idea - but I persevered and can now tell you that the movie begins with a tender scene between martial arts instructor Sirus and his girlfriend Stacey. Stacey is worried that the relationship isn't moving forward, but squeals with delight when Sirus surprises her with a "I want you to move in with me" ring. He'd like to propose, but he's just opened a karate school, so the timing isn't great. Still, he promises that when things settle down, she'll have "the bestest ring, the bestest ceremony." So let's see: we've got young love blossoming into a bright, happy future, and a world of potential postponed by an obligation that carries a slight edge of danger. Yup, I'm willing to bet that nothing bad will ever happen to this couple ever. I'm also willing to bet that unicorns are real and a puppy will be elected the next President. 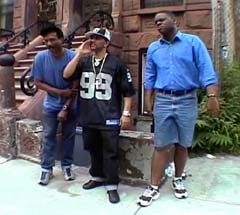 Yep, an old middle school custodian, a Columbian midget, and Wayne Brady. Terrifying.Sure enough, trouble in paradise comes quickly, as Sirus walks Stacey the half a block back to her own apartment. On the way, they pass by a posse of hoodlums. Wait, does three guys equal a posse? I can never keep this stuff straight. In any event, these three thugs present a menacing picture. First, there's Rich Nice, a guy whose name is ironic, because he is actually neither. See what I did just there? That was more clever than anything in Urban Ninjas. Rich Nice (as he must always be called) dresses like your stereotypical black thug, what with his oversized jersey and his bling. Well, okay, he dresses like what white people imagine to be the stereotypical black thug, so he's a little cleaner and latino. Also, the actor who plays him is named Hawk Henderson. That's all you need to know there.

Rich Nice's two henchmen are Raven, whose Mom dresses him, as evidenced by the fact that he constantly has his button-down shirt tucked into his shorts, and Dope Fiend, who is a dope fiend. One more time - our bad guys in this feature are a latino guy named Rich Nice, a retard, and a guy who is perpetually on heroin. I pass scarier guys than these every day on the way to the subway, and my neighborhood is 99% Hassidic Jews. Still, Sirus and Stacey quicken their pace to avoid Rich Nice's mean-spirited taunts about Sirus's karate, which include the titular exchange:

Rich Nice: "Yo, he's what you call a true urban ninja!"

Dope Fiend: (Twitching uncontrollably )"Yo, Rich Nice! What is an& urban NIN-jaaaaaaah!"

Rich Nice: "It's a guy who learns how to fight from a Playstation 2 game!"