Tuesday, Sep 14, 2004 by Rich "Lowtax" Kyanka (@TwitterHasBannedAllMyAccountsEver)
Know of an awful site? Send it to us and become a hero! 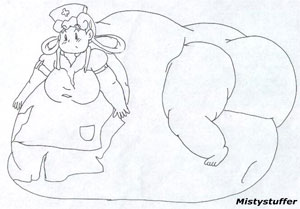 It was at that point that Joy’s daughter entered. When she had been described as a big eater, no one had been kidding; she couldn’t possibly have been less than five hundred pounds, and was in fact probably almost a thousand. She was also famous in her home for being someone of whom guessing the weight was a sport on annual occasions. This occurred in late August, when she had been 834 lbs, and this morning having weighed her self (with special equipment, of course) she knew she had gained in this autumn more weight than in any season of her life to date. She had tipped the scales at an astonishing 908 lbs. The estimation of 1, 000 was therefore not too far off- not as far as she would have been considered.

Oh god yes! Eat that food! Catch that Charizard! Oh baby, this is hot as hell! You people are stupid sick!