Tuesday, Jan 11, 2005 by Rich "Lowtax" Kyanka (@TwitterHasBannedAllMyAccountsEver)
Know of an awful site? Send it to us and become a hero!

Marla Olmstead, submitted by Un4given97. Marla Olmstead has been heralded as a "genius" and has had some of her paintings sell for over $50,000 per piece. She's been featured on "The Today Show," "CBS Sunday," and "60 Minutes." Oh, and by the way, SHE'S FOUR YEARS OLD. 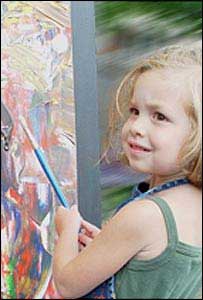 Marla Olmstead was born in Johnson City, New York in February, 2000. She began painting at the age of one. At two, she was creating large works on canvas. Her first exhibition, “All Kinds of Colors,” was held at a Binghamton, New York coffeehouse when she was just three years old.

Marla's recent works, some as large as 6'X6', feature vast fields of tension, bolts of color and great depth. She successfully marries the beautiful, raw strokes of a child with a mature sense of balance, form and a sometimes atmospheric composition.

Yeah, she does all that crap, right. I mean, it's not like she's four years old and randomly throws shit on a canvas while a bunch of pretentious art "experts" fawn over her pacifier and call her the greatest genius since the homeless guy who vomited feces on a canvas and said it was a statement about the current political climate in Germany. This kid doesn't know crap about composition. This kid doesn't know crap about balance. It's a drooling four year old who has inadvertently become the greatest and youngest scam artist in the history of America. Better save all that money you're making with your current sales, kid, cause you're gonna need it when you start your crippling heroin habit at the age of eight, knowing you artistically peaked at the age of FOUR. If I had any respect for the art world, I would've definitely lost it now.