Like Grizzly Bear, Dirty Projectors like to indulge in ape-shit harmonies all the goddamn time. Unlike Grizzly Bear, Dirty Projectors don't actually sell records. For example, the band's poisonous collection of easy-listening Black Flag covers only moved about 9,000 copies, a total that could embarrass even the dregs of the Juggalo clown car. But despite Dirty Projectors' near-complete irrelevance, I decided to address them because so many readers have complained about the group's "high-concept pseudo-intellectual gimmickry" and "un-prog indie douchery." 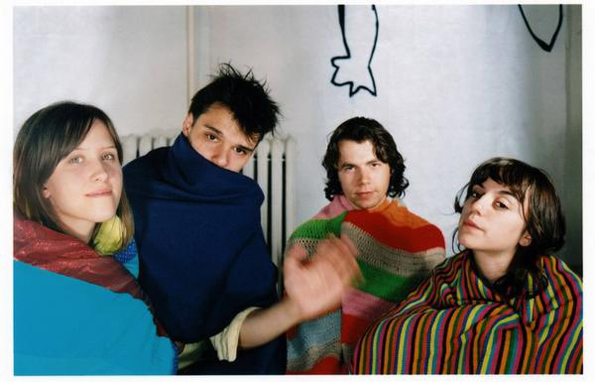 David and the amazing Technicolor suckfest.

Most people will never mention either Grizzly Bear or Dirty Projectors, because they don't follow indie music, or because they purposefully ignore blog-hyped acts, or because they recognize shitty music when they hear it and vow never to speak of it again. The small, pathetic minority that takes these groups seriously often uses them in the same sentence. Because these people are stupid, that sentence is usually "what's the best album of 2009 so far?"

Ultimately, Dirty Projectors singer David Longstreth single-handedly claims the prize in that category for his band. During the course of a New York Times article, he likens himself to David Blake, Richard Wagner and John Coltrane. He also reveals his aversion to video games using the most effetely dickish phrasing possible: "When I would go over to friends' houses, and they would be zoning out to Mario Brothers, I just found it the most distasteful thing." Instead of saving the princess, Longstreth spent his teenage years writing interchangeable "ooh" and "ohh" parts in various rhythms and octaves, so that equally interchangeable female singers could later perform them at his whims.

The Times reports Longstreth "seemed perfectly comfortable as boss and musical director, telling the women at one point to make their harmonies more 'Slavic.'" Judging by the insufferable vocal arrangements on Dirty Projectors' latest release Bitte Orca, here are some more instructions he apparently imparted: 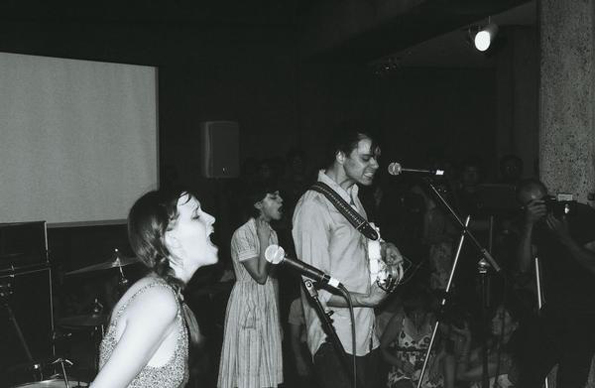 This picture was brought to you by the sounds "OOOH" and "AHHH."

Bitte Orca boldly opens with its most annoying song, "Cannibal Resource." After about 27 seconds of jangling guitar, Longstreth uncorks his falsetto warble, which sounds like Tiny Tim's voice reincarnated inside the delusional frontman of an atrocious Prince cover band. A few seconds later, his wretched harpy chorus starts blathering "ayyy-oh, EH-oh," and then the fucking handclaps kick in. It's like a parade that irritates you as it's passing by your house, then it suddenly barges through your door and becomes considerably louder, then it stomps you to death.

"The music I'm making is not terribly easy to apprehend," Longstreth told The Times. "Apprehend" can mean "understand" and "grasp," but the more common definition is "arrest, seize, halt." So, Longstreth is either being a pretentious cock by claiming that his ridiculous exercises in polyphonic wankery might befuddle the feeble minds of average folks, or, even worse, he's warning the listening public that his horrible songs can never be stopped. 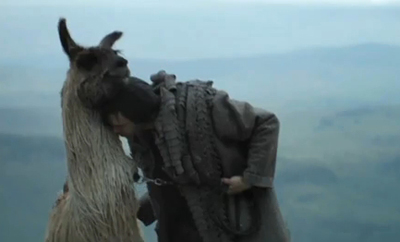 The "Stillness" video, so random, wtf. Llamas, more like LOLlamas!

The album's most apprehendable track, "Stillness is the Move," uses a Timbaland-style Indian-guitar hook, but there's little low-end support, so the loop just hangs there, sounding thin and trebly. It's relatively catchy, but singer Amber Coffman delivers her lines so strangely ("got a job as a wait-turrr-esss") that it's difficult to sing along with it. Coffman has a decent voice, but she strays far out of her range in futile pursuit of Mariah Carey, littering the song with clumsy melismas. Dirty Projectors tried to make a passable pop/R&B tune, a feat even the hackiest songwriters execute regularly, and they botched nearly every criterion. And this is still the best thing they've ever released.

Longstreth titled the album Bitte Orca, pairing the German word for "please" with a whale just for the fuck of it: "There's not really a literal meaning to draw out of the phrase. But I like the way the words sound together. I feel like there's some kind of sense just in the relation between the two." This nonsensical rationale mirrors his songwriting approach, which involves combining whatever random incompatible genres sound good to his addled brain.

Once he's mad-libbed the words together, Longstreth becomes infatuated with his arbitrary titles, which is why he starts chanting "bitte orca" as if it were some deranged mantra midway through "Useful Chamber." Any phrase can seemingly lose meaning if repeated enough times; Longstreth's creations start at meaningless and somehow devolve from there. Some of his titles might appear too ungainly to incorporate in a chorus, such as "Temecula Sunrise," but he loosens his enunciation until it sounds like "to make you last so right" or "to make you lasso rice."