Fireaxe - Lovecraftian Nightmares, submitted by Voice of Reason. Lovecraft was one of the worst poets I have ever read. I like some of his stories, but I fail to see how he inspires all of these shitty metal bands to write songs about lurking evils, indescribable horrors, and cats of saturn. Fireaxe is a shitty metal band, maybe one of the shittiest metal bands and their album "Lovecraftian Nightmares", as you may have guessed, is heavily influenced by the clumsy tongue of poet and author HP Lovecraft. 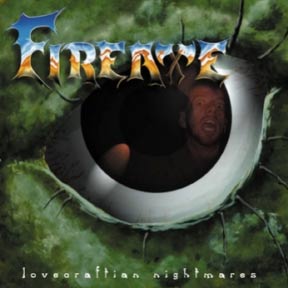 "Their hidden dread ringed outposts brood,
upon a million worlds of space,
Abhorred by every living race,
yet scatheless in their solitude."

I understand the evil eye on their album cover, but what's up with the hillbilly who looks like he is trying out for a belching contest? I can only assume it has something to do with seeing "the unspeakable". Honestly the lyrics of most of their songs fail to capture the lazy vagary with which Lovecraft often addressed the horrors in his novels. I think if Lovecraft wrote a heavy metal shitball song it might go a little something like this:

The Unnamable Evil
Out of the hoary sepulcher it came,
gibbering madly to Carter,
he started the dig as a scientist,
now he might just end up a martyr.

It was green and difficult to describe,
I won't describe it just now,
I don't even clearly imagine it,
so there's no way to tell you how

chorus
up from the void,
oddly angled and mean,
so inhuman and horrible,
you know what I mean!

The cover to the album would just be one of those "Mind's Eye" stereographs only you wouldn't ever see anything no matter how hard you tried.