You want to be in a public place, but you also want to be drunk. Do you drink before you leave? Do you buy drinks while you're out? Yes, and yes, obviously. These are reasonable answers to the problem of not being drunk in public. And, as always, where reasonable ends, commerce begins! 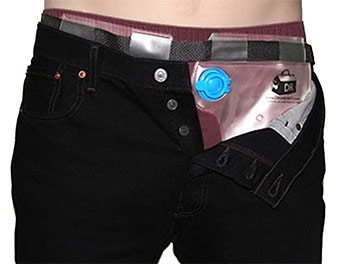 Sneaky Shorts get you 24 ounces of booze anywhere you can wear pants. Well, warm booze, carried in a thin plastic bag strapped to your upper thighs. But that's a start, right? It's hard to get into the music at a funeral if you can't sip a little Shorts Gin from your pouch-pipe. And it's good to lower your inhibitions so you don't let everyone's sniffling put you off from making convos with the bereaved. 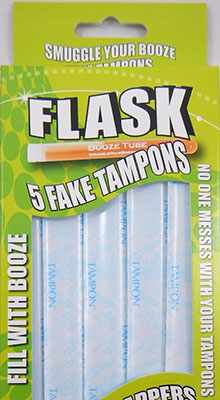 Tampon Flasks, on the other hand, are for smaller amounts of liquor. They only hold one ounce each. But if you're in a situation where drinking liquid out of a tampon would seem more normal than drinking from a long straw connected to your crotch, then they're clearly the way to go. You might find yourself on the Kiss Cam taking Tampon Shots at the ball game, but it beats paying ballpark prices for beer.

You could probably stuff hot dogs into tampon wrappers to avoid paying ballpark hotdog prices, but let's leave that for another day. 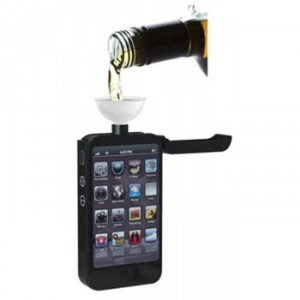 Oh, this? Ha ha! It's just my iPhone! Yeah, I'm drinking out of it, and it's actually a plastic box covered in stickers, but, uh... this is an app. It's like... e-Liquid. Very modern. Electronic liquid. 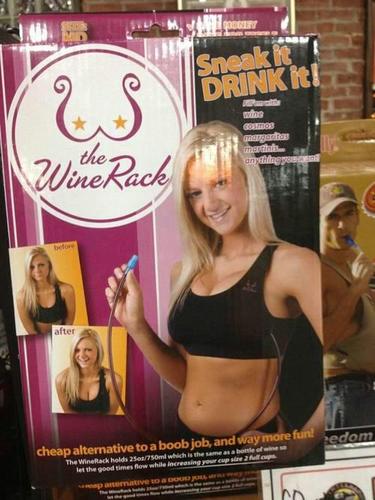 The WineRack is a bra with a plastic hose. You wear the bra, and then you suck wine through the hose. Why you'd need to do this secretly is anyone's guess, since standing around drinking wine from a wine glass is seen as exquisitely classy by most Americans. But hey, don't let me stop you from sucking hot Carlo Rossi from your chestjugs in public. You live your best life that you gotta live, Grapetits.

"Hold up," you say. "I'm definitely on the Grapetits tip, but I'm a fat man, and I need something more male." Of course you do. It's The Beer Belly, which holds EIGHTY ounces of liquid. And it differs from these other products only in size and marketing. 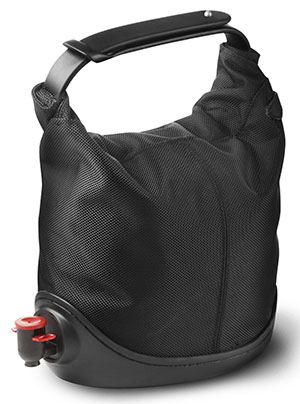 The actual name of this wine-based purse is The Baggy Winecoat, but most importantly, it holds THREE LITERS of wine. That's over 100 ounces, besting even the Beer Belly at its smuggling capacity. A spout sticks out of the corner, defiantly, because plastic hoses are for the timid. You put the wine in the Winecoat and you drink the wine. You hide the wine, and you drink it later, at the wrong temperature. It took Europe centuries to perfect the wine-making process, and now we load it into our artificial bladders and tampons, and piss it back into our mouths, incorrectly. Greatest nation on Earth.