Sam Sloan's Homepage, submitted by Me. If there was a solar system of bad homepages, Sam Sloan's website would be Jupiter. Either that, or the freaking sun. In all my journeys across the bold spectrum of knowledge, wisdom, and pornography known as the World Wide Web, no site has captivated me the way that Sam Sloan's site has. Even if Everything/Nothing were to be taken twenty light years too far, it would still fall short of the mass of pure, 100% Grade A Amazing Shit that Sam Sloan has created. Virtually every topic, from current affairs to his many affairs are documented in excruciating detail. And unlike all those dopey kids writing web journals about Kyle MacLachlan or whoever the current teen heartthrob is, Sam has lived a really full and rich life. It really shows in his thousands and thousands of updates.

Get a good look at the man. You won't soon forget his face! 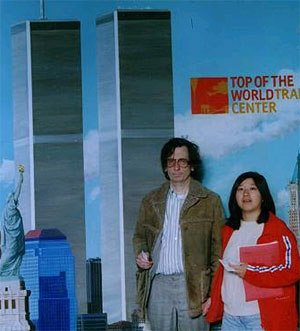 Let's get this party started with a bang! No wait, with a sizzle! As in the sizzling hot babes of international chess! Vroom vroom! You just raised my rook! But then again, taking one look at them it's not hard to see why Sam got confussed:

It was not only the women in the tournament who were beautiful. Some of the men were beautiful too. For example, there were Judit Polgar and Antoaneta Stefanova. I must admit they looked like women, but since they were playing in the "Men's World Chess Olympiad", I must be mistaken. (You can never tell these days).

Of course when it comes to actual women, Sam is a man who likes to put his penis where it counts! We're talking end zone action here folks! Touchdown!

Ever since my bitter experience with my girlfriend Passion Julinsey, it will now and in the future always be my policy that any girlfriend I have (if I ever get another one) I will try to take some good pictures of her getting fucked.

Only a hunky man like Sam Sloan would be able to tell it like it is! He's got the women eating out of his hands!

I was told by Idant Corp. that my sperm count was 144 million sperm per cc. This is an exceptionally high count, they said. I do not smoke, drink, use drugs, or anything like that, other than drink coffee.

But he's not just a romantic writing obsessive and deranged articles about all the women he's groped. Not by a long shot! Sam is a certifiable nutcase in a wide range of other areas. In fact, a whole heck of a lot of the pages on his site are dedicated to his spectacular history as a criminal, the various international conspiracies he's been a part of, and the many legal battles he's waged and is waging.

Plus there's more! Read about Sam's heroic struggles against the tyrannical international chess barons here and here. Sam is like the bad boy of chess. And let me tell you, you don't get to be the bad boy of pro chess by playing it by the rules!

Then of course we have Sam Sloan, the defender of the innocent. Sam cuts through the muck and explains why John Walker Lindh should be a free man:

For example, Lindh has been charged with "Conspiracy to kill Americans". It is well known that the American military attacked Afghanistan. Lindh was already in Afghanistan months before the US attacked. What was Lindh supposed to do? How could Lindh have either prevented or facilitated the US attacks?

On the other hand, I am sure that I never had the wife of JFK Jr. as a passenger in my taxi, because I knew what she looked like and I was on the lookout for her. I remember feeling shocked to read that she hung out at the dance club "Life", which is at 158 Bleeker Street, where I often pick up passengers, because I would not want any woman I am involved with going to such a place.

The amount of mystery, adventure, and absolute garbage simply must be explored in depth to be appreciated. Just watch out for that repulsive, straight-outta-the-womb baby picture thrown in there. Oh, and enjoy the MIDI music, because there's a different song on every page! I leave you with this delightful quote:

On May 1, 2000, I was startled to receive a telephone call and an e-mail from H. Ross Perot . It turned out that he had just now read my web page about him which has been up for more than two years since April 1998 which said that, while he was Chairman of the stock brokerage firm of DuPont Glore Forgan, all the queers had been fired.

By all means, partake of the excitement!