Prepare your angry letters, dear readers, for this week we declare The Twilight Saga: Breaking Dawn - Part 1 the film of the year. I know that makes you angry, even though it shouldn't. To balance things out, our talking-animal expert has a suitably torturous experience with the dire Happy Feet Two.

EXPECTATIONS: I hate Twilight. I HATE Twilight. And, yet, being the dutiful critic, I rewatched New Moon, which I barely remembered, and I endured Eclipse, which I'd never seen. Based on the incredible awfulness of those glimmering turds in the toilet bowl of cinematic history, I fully expect The Twilight Saga: Breaking Dawn: Part 1 (First Sequence) to be ... THE WORST FILM I HAVE EVER SEEN. (TROOF!)

REALITY: Breaking Dawn is one of those rare films that challenged me as a filmgoer, which is something that could be said for only two other films I've seen this year (Drive and Take Shelter). In 2007, Ben Lyons wrongly proclaimed I Am Legend as a movie that would be mandatory viewing for film students in the years to come; I hope to God I'm right when I say the same thing about Breaking Dawn.

Before you scroll down to the near-perfect score I'm about to award a Twilight movie and write off my opinions as those of a delusional madman, allow me to justify bestowing such an honor upon a movie I truly dreaded seeing. 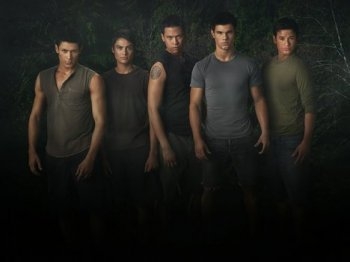 Hello, ladies.I'm going to dispense with a plot synopsis; this far in, you either know what you're in for or you've been blessed from on high. I've despised Twilight since I read the plot synopsis of the inaugural novel -- more than pap, I've called it evil young-adult "literature" that normalizes psychological abuse and pedophilia. And until now, I assumed, because of the parity between the films and the books upon which they're based, the same failings could be ascribed to the films.

However, fifteen minutes into Breaking Dawn, I realized just how very wrong I was. The heavens parted, God reached down and massaged my brain, and I finally fucking got it: Instead of being close adaptations, the films are oh-so-subtle parodies of their source novels. Leave it to director Bill Condon, who won one Oscar for screenwriting and was nominated for another, to tip his hand and push actors who have been relatively open about their disdain for the series into making an outright parody.


Essentially, the Twilight series has become a vessel through which genuinely talented directors can deliver genuinely terrible movies, tongue planted firmly in cheek while insufferable Twilight scribe Stephenie Meyer remains none the wiser. To be clear, I'm invoking the Freddy Got Fingered defense: A movie that's constructed to be intentionally bad can also be a great film if it accomplishes its primary goal. Because the makers of Breaking Dawn so sneakily yet viciously bit the hand that fed them, their film -- a $127 million prank -- runs with the best of them. 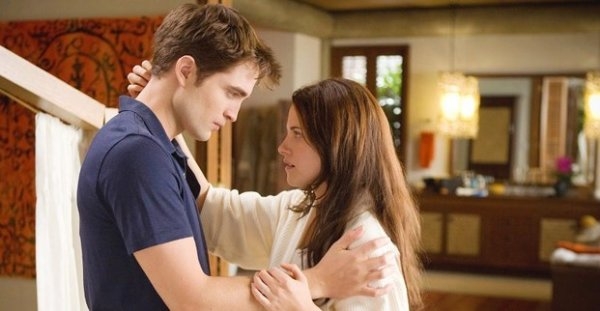 That is some super intense staring right there.

Breaking Dawn does for oh-so-serious teen Goth literature what Tim and Eric do for public-access television. From scene to scene, Pattinson varies his cadence and motivations -- within 30 minutes, he does impressions of Marlon Brando and Keanu Reeves before attempting an incredibly awful Boston accent when he whines to Bella "Yer supposed to be my pawtna!" Rarely has an actor ever been so game to desecrate his own persona.

Condon, who helmed Kinsey and Gods and Monsters and clearly knows his way around a director's chair, steals tropes from silent films, noir thrillers and Valtrex commercials. Edward and Bella spend their honeymoon playing chess against the backdrop of a picturesque Brazillian cove. And the chess gets remarkably violent, as Edward and Bella take turns knocking each other's pieces off the board, which is an eerie predictor of the lifetime of mutual domestic violence their unhealthy relationship ensures. 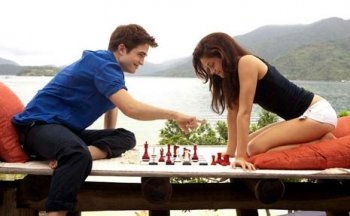 A honeymoon spent playing chess is a honeymoon wasted.To its credit, Breaking Dawn doesn't shy away from one indescribably bizarre image: Pattinson holding a placenta-slicked newborn while donning a shirt basted in viscera and SMILING, his lips covered in blood. Not only does Condon relish this image, cinematographer Guillermo Navarro executes a slow zoom in on Pattinson's sanguine grin. If that isn't a wink-wink to viewers familiar with cinematic conventions, I don't know what is.

Edward and Bella have never looked worse. For those who thought Edward was hideous in Twilight, Condon has kicked "pale and sickly chic" to 11. For the entire third act, Bella looks more like a Dachau prisoner than a budding swan, replete with cracked blue lips, an emaciated face and a bruised, ever-growing distended stomach. Doing his part to one-up her, Pattinson wears the whitest makeup known to man and makes it a point to look as pained as possible at every opportunity. For all the press Pattinson gets for going out of his way to repel fans and denounce Twilight, he's finally found in Condon a director who allows him to reiterate his stance with his onscreen antics.

By the time Breaking Dawn rolls out the talking animals (according to office rules, Joe should've gotten first crack at reviewing this), werewolves who speak in ridiculously mid-ranged prepubescent voiceovers, the jig is up: This movie is nothing but an elaborate joke at the expense of Meyer and her loyal gang of Twi-hards. Considering the quality of everything on display, I hope and assume Condon & Co. blew most of that massive budget on coke and made the rest with pennies, fueled by the strongest desire to burn the franchise to the ground.

MINORITY REPORT: I have to wonder, though. What is the point of making a film like Twilight ironically? Anyone who can appreciate the irony isn't going to see the film, and anyone who has paid to see it by now will praise it at face value. If your reading is correct, Sean, then you're saying everyone involved with this film is using it as a masturbatory ego-boost, just like Stephanie Meyer used the book series as a masturbatory ego boost. In this manner, Breaking Dawn is actually the most sincere adaptation in the series, which kind of defeats your whole point. Or did I just blow your mind? - Martin R. "Vargo" Schneider