Marti Escageda, aka El Cosplayer, has been playing fighting games since he was five years old, according to his video review of Fatal Fury, which I stopped watching after realizing it goes on for 20 minutes. Over the years, he's tried his hand at various creative endeavors including dopey Flash animations, comedy sketches that mostly seem to consist of him talking to himself in front of a wall (move over Frank Caliendo!), and something called "Lunatic Pro Wrestling," which seems to be him and his friends pretend-fighting for no reason. 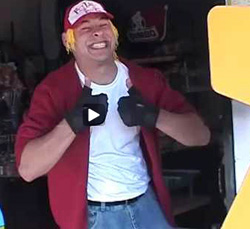 El Cosplayer's true calling, however, is staging live-action recreations of arcade fighting games. Armed with a ragtag crew of friends and some pretty slick special effects, El Cosplayer has managed to blend the passion of Star Wars Kid with the technology of Nick Arcade: a winning combination!

The whole thing feels like a bizarre premise for a Power Rangers-type show or a human-interest story on the local news: "Instead of doing drugs and cyberbullying after school, these wholesome teenagers [I assume they're teenagers] meet up after school to recreate video games!"

The videos are earnestly goofy, but they lose their novelty fairly quickly. There's a point when the fancy special effects just take over completely and everyone's flying around and shooting firestorms out of their fingers, which makes the cosplaying aspect fairly irrelevant. Why bother getting real people if you're just going to use them like paper dolls to recreate sprite animations with meticulous detail in After Effects? It's the gamer equivalent of that insane frame-by-frame Psycho remake, and I don't quite understand it. Kids these days!