Skyfire's Magic Roundabout (Thanks Socket Ryanist) - I'm no mathematician, but I'm starting to see a pattern in most webcomics. Since my daily encounters with math revolve around struggling to figure out what 15% of my restaurant tab is (those all-you-can-eat hot wings don't walk themselves to the table), my formula may be a bit off, but I think you'll get my point:

Case in point: Skyfire's Magic Roundabout, a comic so terrible it requires two free hosting sources to contain all its bile. Besides the prerequisite furry shit (which I know is every bit as fun a target as Scientology these days), we get some awesome non-sequitur "humor" so terrible a Burger King ad exec would turn up his nose at it . Here is my personal favorite: 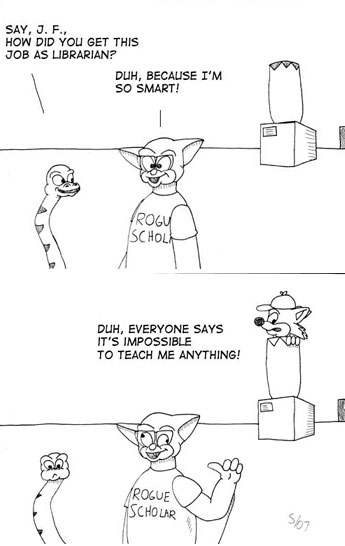 While there are a number of things wrong with this piece - nothing created by this person should look as smug as the snake in the second panel, for instance - I'm most concerned with the comic's corresponding journal entry, which says:

BTW, that pedestal was drawn with what I learned from those perspective lessons.

The only thing we can hope is that the same person who taught him those "perspective lessons" also teaches him about things like "breathing" and "driving in heavy traffic," and that those lessons net similar results. While I'm sure Mr. Skyfire has a great life writing jokes on Popsicle sticks once he passes ART-D101 How To Use A Ruler Without Inadvertently Castrating Yourself, I think I'll stick with old Calvin and Hobbes compilations for my comic fix. The Internet puts a lot of things to good use, but comics, apparently, aren't one of them.