I'm going to be honest here. I'm pretty much a Sasquatch expert. First of all, I've been to Seattle's Museum of the Mysteries, which has a respectable collection of authentic Sasquatch evidence (such as mud Sasquatch sat in). Second, I own this DVD, given to me as a gift by Dr. David Thorpe, who recognized in me a profound expertise on the subject of Sasquatch, even though I never once showed it.

That is why I find this website by Joan Ocean so especially disturbing. Mainly, because it begins with the following false assertions about Big Foot:

Did you know that Sasquatch can:

Read
Write
Shape-shift
Project Their Voice
Create Infrasound that affects the environment
De-materialize at will, or cause you to have an experience of lost time so you think they de-materialized.
Travel 300 miles a day on foot.
Live in well-lighted underground facilities
Contact and live with Star People
Tell us about our past and our future.
Have lived here longer than the human race.

From the above list, only one fact is true. Yes, indeed, a Sasquatch can live in well-lit underground facilities. They are not Morlocks, after all. In fact, pretty much everything except Morlocks can live in well lit facilities above or below ground, it just depends on the type of lighting.

From those ridiculous lies, she goes on to share the touching story of her own relationship with Sasquatch and the Proud Sasquatch Peoples, which, as these things are want to do, began with a speaker at the prestigious Dolphin and E.T. Conference.

This just goes to show you how wrong the skeptics are. A cynical person like myself would go into the woods looking for Sasquatch and probably get some kind of rash and then accidentally touch a really gross bug and run away without finding the magic. But somebody with an open heart and a firm belief in the magic properties of rocks, orbs, and shape-shifting literate apes with innate ventriloquism skills is going to find exactly what they are looking for. Obviously, skeptical science based on hard evidence isn't doing anybody any good. I suppose a lot of this has to do with our lack of understanding of biological infrasound, a newly emerging science invented by non-scientific aspiring forest fairies.

Sasquatch & Friends, as previously mentioned, can read and write, in English no less, and have a lot to say. As Joan shares on her website, the Ol' Hairballs even take to writing letters to her when they aren't too busy chatting with Star Folk or living in well-lit underground facilities with impunity. Also, let us not forget the Sasquatch's mastery of energy balls, or light orbs.

In the end, I can't help but wonder: Did this lady just shotgun a mason jar of peyote and watch a Harry and the Hendersons DVD? Because I've been planning on doing that for some time, but I don't want to do it if it's just going to inspire me to make a really bad website. Especially since it's such a private, spiritual event.

All of this leads me to question the sanity of the author. Who is this lady anyway? 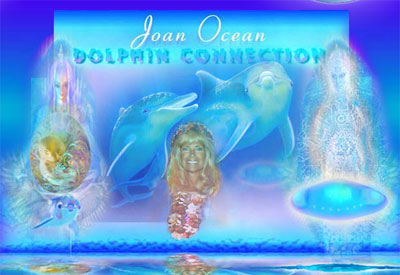 Oh. Oh dear. I guess I should have looked sooner.

Now, as far as I can tell, the author of this site is your typical woman who communicates telepathically with dolphins in a desperate attempt to understand their transdimensional powers. Nothing unusual there, so what would drive her to write such ridiculous drivel about Big Foot? Did her sanity get pinned under a magick gift shop rock procured from the vortex-ridden dimensional borderworld of Sedona, Arizona?

All of this makes me rather sad for the plight of dolphins and Sasquatches. If I was just hanging out, doing my usual routine of swimming around, and some fruity alien lady showed up and started rambling on about the spiritual nature of my biological predisposition toward movement and exercise, I'd feel pretty goddamn stupid. Dolphins are smart and chill, too. I imagine they are up there with dogs in terms of just enjoying the hell out of life and being totally relaxed. When was the last time somebody saw a dog sticking its head out of a car window and commented on its profound spiritual nature? I hope if anybody ever did that, the car carrying the dog immediately ran them over, because, surprise, another dog was driving the vehicle and that dog was drunk as fuck on Pabst Blue Ribbon.

I guess what I'm trying to say is that this lady and all her crazy magic rock loving, Sasquatch-fantasizing, dolphin-fetishizing friends are batshit insane.

Oh, and before I go, here is a picture of Grandma dematerializing: 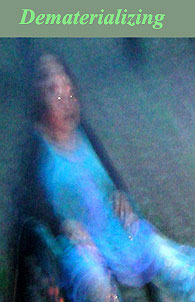 If that doesn't prove the existence of the supernatural, I don't know what will.