A Paranormal/Conspiracy Guide to Ghosts

why are ghosts invisible some times and then sometimes they arent

they don't manifest unless the emotional resonance in the area is strong enough. it takes psychic energy to even partially cross back over the threshold to the land of the living. hth

OP, they have to expend psychic energy to appear visible, they only do so in times of extreme duress and they are charging up why invisible

if i saw a ghost i wouldnt be scared even one bit. id just see the ghost and say, oh wow, and roll my eyes and walk away. im not easily preturbed.

ghosts arent even scary there i said it

ya no duh. "woooOoOOOo".

if ghosts exist how come they are all gay ass peasants and fops from the AD era. millions of cavemen died way more traumatic deaths. if ghosts were real we would be up to our neck in caveman ghosts

ghosts have like time limits before they are reassigned, most ghosts now are from the 20th century unless they were ultrapowerful like a pope

they're all inside caves and have no house or structure to haunt? Jesus crhist.

haunting trees and caves and shit dude, get real

first of all fucker, ancient ghosts have had far more time and opportunities to be put to rest. furthermore fucker, life was simpler in those days so any unfinished business the ghosts have keeping them tied to this plane was easier to fulfill. finally fucker, truly ancient spirits have been dead so long that they are not even recognizable as ghosts in a simplistic "disembodied humanoid" sense that closed-minded skeptards like you would think of. they are powerful abstract beings and i hope one finds u and torments youre soul.... IF YOU EVEN HAVE ONE!!! 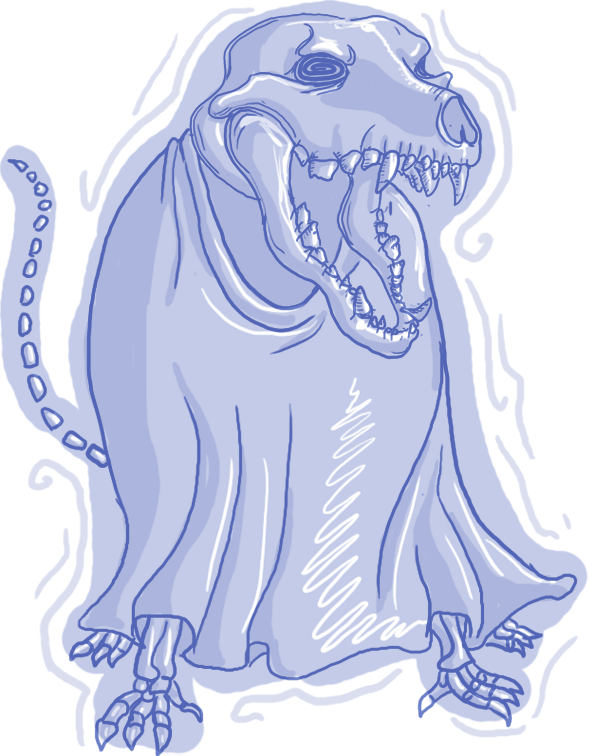 Anybody seen a Skeledon Ghost Dog, on a different note? Thats some fucked up shit.

Okay, so we all know ghosts can scare us. I'm comfortable admitting that! But a more contentious question is this: can a Ghost be scared? Does fear still exist in the ghost/spirit's psychic rolodex?

One school of thought is that "fear" is an artifact of evolution and only functions to protect the corporeal body from harm -- in this case, fear would cease to exist when you kick the bucket, meaning it would be impossible to scare a ghost. Shame, isn't it?

On the other hand, one possibility is that ghosts and spirits do possess the full human emotional catalogue in some form or another, which begs some bigger questions: when a Geist is knocking plates off your cabinet, is it experienceing "Anger", or just fulfilling some astral prerogative? Of course even if a ghost can be scared its possible we are incapable of even envisioning the type of thing that might scare it.

So what say you goons? To scare or not to scare?

I don't think a physical threat would work against a ghost, but possibly an existential one would. "Hey, I'm gonna send you to oblivion!" may work; the idea of complete nothingness, the after-afterlife, may be too much for the spirit to handle. Humanity has spent centuries wondering what happens when you die, imagine being forced to face your own doublemortality.

You personally cant scare a ghost, but they obviously know fear (the best emotion)

What gives ghosts fear then? Can they learn to fear things that they didn't fear during life? Could our technology ever develop to the point where we can use it to scare a ghost?

the pseudo-existential dread of being released from their purgatorial prisons and ceasing to exist? just thinking out loud here

Thanks to Paranormal/Conspiracy moderators Skylark and Rappin4Safety, and to everyone who contributed to this Goldmine and its glorious predecessor "Hand-to_Hand Combat with Extraterrestrials." For the subforum's epitaph, we turn to No Hephaestus: "RIp, to those who died. It's a tough world for those with questioning minds."