A few weeks ago on WTF, D&D!? we looked at the current edition of one of the most popular tabletop games of all time: Warhammer 40,000. This week we revisit 40K for a trip down memory lane, all the way back to 1987. Warhammer was new and adventurous and Games Workshop didn't know quite what they were doing or what sort of things to include in their new game. The result was Rogue Trader, one of the most schizophrenic and fascinating gaming books of all time. 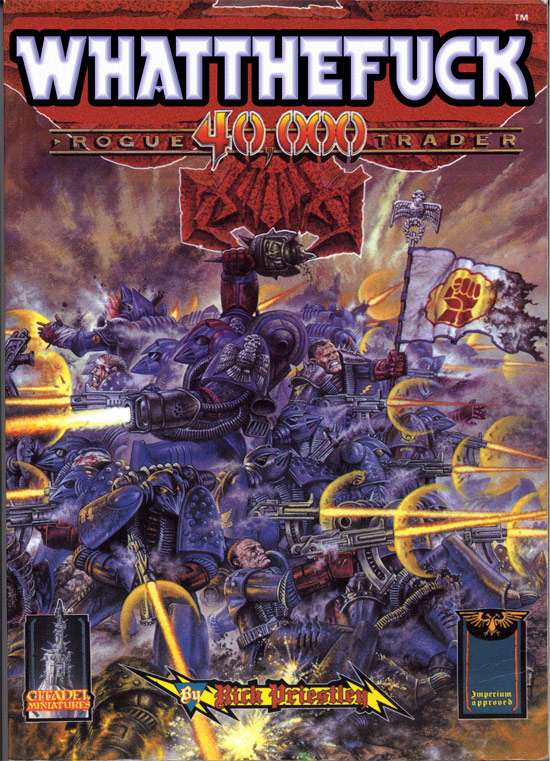 Zack: Just seeing that perfectly horizontal Ork head clutched in the crimson fist makes me all tingly inside.

Steve: Yo, there is nothing not sweet as heck about that cover. I agree bro. Even the tiny dude holding the flag is ready for some grim and dark things to transpire.

Steve: There is more than war?

Zack: As I think we'll see there was a lot more than war back in the Rogue Trader days. Lots of alternative activities and discussions going on.

Steve: War is pretty awesome, but there are lots of other things. Like snacks or a hot blond unzipping her wetsuit over a couple of giant boobs and they sorta pop apart when she unzips and you can see some water in her cleavage.

Zack: It's hard to represent hot boobs on a tabletop.

Steve: No way, dude, hot boobs are a tabletop tradition. I have a shelf of dusty succubuses (succubae?) to prove you wrong.

Zack: In Warhammer the closest thing to a succubus is crossed with a lobster. And they have a minotaur thing with one boob, but that doesn't really count.

Steve: No it totally does. I'll take it. I will take that boob.

Zack: Any teet in a storm?

Steve: Any hooter on an ork.