This week at the movies wasn't so much awful as it was fucking dreadful. The holiday season is supposed to guarantee good times and good movies, but I guess Ninja Assassin and Old Dogs represent the end of this promise as we know it, offering only fake-ass ninjas and a lame-ass sitcom stretched to a miserable 88 minutes.

EXPECTATIONS: Ninja Assassin is the 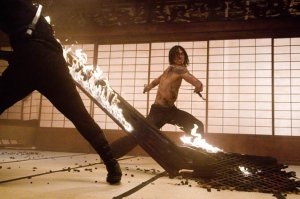 That's cool and all, but I'd rather be playing Mortal Kombat.latest collaboration between director James McTeigue and producers The Wachowski Bros. (yes, brothers - the whole sex change story is a myth). The last time the three of them got together, we got V for Vendetta, a film that was reasonably fun, but was nowhere near as clever as it thought it was. Ninja Assassin, on the other hand, looks to be about as stupid as all hell, which might be the correct approach seeing as how the Wachowskis emptied their "smart" bank on The Matrix.

Raizo (played by Korean pop singer Rain) is a disgraced ninja out for revenge. We first meet Raizo in a wholly unnecessary preface, wherein he wastes a bunch of gangsters for seemingly no good reason, other than the fact that they're so totally not ninjas. As we follow his life, we discover that he was taken in as an orphan by a reclusive ninja clan and taught from birth to be a shadowy killer. Things go well for Raizo up until the subplot involving forbidden ninja love, which I confess isn't as sexy as that arrangement of words makes it sound. This leads to Raizo betraying his clan, growing his hair out emo-style and getting back at them for ruining his life, armed with nothing but his trusty blade-on-a-chain thing and the entire Silver Pictures CG department.

Yes, I am sad to announce that Ninja Assassin is one of those kinds of action films, one that relies mostly on actors jumping around in front of a green screen while all the good stuff gets added in later, rather than having the performers do things like actually fight. In fact, what astounds me the most about Ninja Assassin is how incredibly fake everything looks. Fake blood, fake gore, fake weapons. Hell, even the actor's movements were fake at times, with the ninjas turning into little black streaks darting across the room like gnats. I guess it would have been too much to ask them to move on their own or something. To be honest, I'm surprised the filmmakers didn't tread into Beowulf territory and make the whole thing CG -- at least that way everything would have looked consistently phony.

Iron Chef at the sushi exhibition.Whatever happened to the good ol' days of movies like Return of the Dragon and Drunken Master II, in which martial artists performed feats that were worthy of our ticket money? I can't entirely blame the actors for this, though. The real fault lies with John McTeigue's direction. Ninja Assassin contains some of the most poorly executed fight scenes I've seen since Elektra. I'm certain the folks McTeigue & Co. hired for their film are very talented stunt performers, but you would never tell by looking at them in action.

The camera is often positioned too close to the action, thus making the martial arts moves difficult to see. In the rare cases that you actually can comprehend what's happening on screen, the editor steps in to cockblock the audience. Not one shot in Ninja Assassin lasts more than a second, making it nigh-impossible to follow the carnage. To compound the problem, most of the fight scenes take place in the dark, further obscuring what little action actually made it to the final cut. It's like the movie has confidence issues regarding its action sequences and is going out its way to hide them from the audience, probably because it knows that they suck.

As for the plot, what can I say? It's a standard action movie plot with revenge and old scores needing to be settled and such. There's also a side plot involving an international conspiracy to keep the ninja clan under wraps, but who gives a shit about that when there are ninjas on the screen fucking shit up? (Even when you can't see them.)

Also the ninjas themselves don't seem to fit popular canon. When I think of ninjas, I think of masters of guile and agility, but the ninjas in Ninja Assassin seem to have trouble grasping both concepts. Sure, the ninjas creep in the shadows where they go unseen, but you still know they're around because whenever they're about to attack they start whispering loudly to each other about killing and various other popular topics of ninja discussion. Seriously guys, couldn't this wait until after the job is done?

They also do this retarded bit where they send their target an envelope full of black sand to let them know they're coming. What kind of professional killer does that? What if the SAS set off a fireworks display at their current location just before they move in for a search-and-destroy mission? There wouldn't be much left of the SAS, that's what. The ninjas also aren't quite as fast on their feet as the film would like to have us believe. The ninja that we see successfully infiltrate a secret underground military installation is the same ninja that, five minutes later, runs into oncoming traffic and gets nailed by a car moving no faster than 20 mph.

Minor quibble, but I also don't like the title.

The invisible man, dagger in hand, waits to pick off the winner of the fight.Was Ninja Assassin the most imaginative name they could come up with? What if Schindler's List had been titled Jews Hiding From Nazis? What if Jaws were titled Some People Who Don't Expect to Get Attacked by a Shark Get Attacked by a Shark? What if Pirates of the Caribbean had been titled Literally Nothing Happens for Approximately Eight Hours?

Robert "Macrame_God" Seeders is currently in therapy after having seen Saló, or the 120 Days of Sodom and can use a few antidepressants if you can spare some.

MINORITY REPORT: Ever since Speed Racer, I'm convinced The Wachowski Brothers are the only filmmakers left in Hollywood who, like girls in the '80s, just want to have fun. In Ninja Assassin, this means a Grindhouse-style throwback to the ninja flicks of yore, complete with improbable weapons, paper-thin acting and Koreans pretending they're Japanese -- which is, all things considered, a step above David Carradine pretending he's Japanese. Is Ninja Assassin a blast? Absolutely. Is Macrame_God out of his goddamned mind? Fo' shizzle. From the opening scene, which plays out like The Untouchables with swords and dismemberment, to the denouement, Ninja Assassin is the sum total of everything that was, is and will ever be great about ninja movies, minus out-of-sync dubbing. Larry and Andy Wachowski -- especially you, Larry, you lady-in-waiting -- don't ever change; you're badass just the way you are. -David "Data Core Devil" del Vacoté III