You might get the chance this week to take a break from your Christmas shopping and take in a movie, so it's good that somebody remembered to release something, and that something turned out to be The Warrior's Way. Joseph "Jay Dub" Wade dropped everything to check it out.

EXPECTATIONS: I'm not going to lie. The fact that this movie even exists perplexes me for a couple of reasons. For one thing, the concept of cowboys fighting ninjas is the kind of thing my friends and I would make up when we were 7 (and 17, let's be honest here). Also, what the fuck kind of bet did Geoffrey Rush and Kate Bosworth lose that they had to agree to star in this? I didn't think she was THAT bad in Superman Returns.

At any rate, I'm expecting an idiotic action story that won't even bother trying to make the intersection of cowboys and ninjas believable. 100 minutes of bullshit fight sequences is probably what I'll get.

REALITY: Thanksgiving weekend is over, the Oscar season hasn't heated up just yet, and the Christmas blockbusters won't get here for a few more weeks. What better week to release something completely ridiculous?

The Warrior's Way might be one of the biggest surprises of the year. Not to say that it's great cinema, or even a particularly good film, but in a year when genre-benders like Scott Pilgrim vs. The World turned out to be juvenile crap (albeit great-looking juvenile crap), it's refreshing to see a movie that wants to entertain by any means necessary.

Yang (Dong-Gun Jang, a man whose name I envy) is the world's deadliest assassin. Tasked with killing a baby (the last remaining member of a rival clan), Yang instead takes the infant and flees for America. He settles down in a desert town populated by circus freaks, a drunk outlaw (Geoffrey Rush) and a girl named Lynne (Kate Bosworth). After setting up shop at a totally-not-racist laundromat (the film was originally titled Laundry Warrior - seriously), Yang begins teaching Lynne how to use a sword while she and the rest of the town teach Yang to live a life of not murdering people. Ever-present is the looming threat of Yang's former clansmen, as well as a band of renegade Confederate soldiers (led by Danny Huston) who love terrorizing the town.

Of course, it's only a matter of time before all parties collide in a hail of gunfire and swordplay, but before we get there, the movie at least has the patience to establish its characters and give them a decent backstory. It's one of the things that most surprised me about The Warrior's Way. As goofy as the whole enterprise is, it actually takes the time to let things build before making the whole thing explode. There's a lengthy flashback involving Lynne that's actually kind of disturbing, and at seemingly random intervals we get glimpses of Yang's childhood. 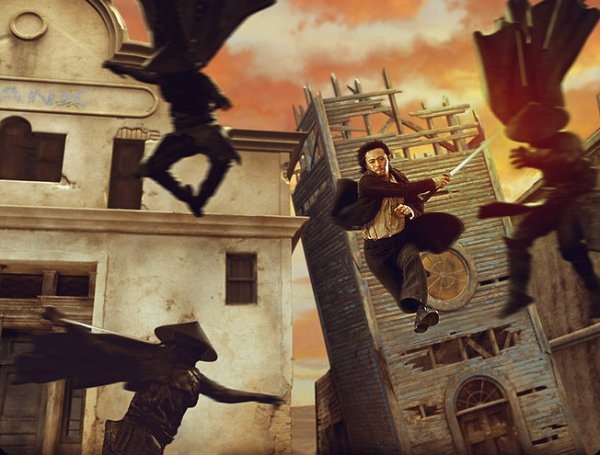 This movie exists at some bizarre nexus between a Sergio Leone spaghetti western, a Zack Snyder CGI-fest, and Blazing Saddles. With a concept like "cowboys versus ninjas," you'd expect some kind of crossover in style, but you wouldn't necessarily expect it to go as full-tilt insane as it does. Take a knockoff Ennio Morricone score, some startling green-screened landscapes, and throw in a bunch of lightning-fast ninja kills, and you're close to understanding just how nuts this movie is. Danny Huston plays a masked Confederate Colonel like some kind of rape-crazy super-villain; dwarf actor extraordinaire Tony Cox gets a lot of screen time as a ringmaster/mayor; Yang's clan is called the Sad Flutes because of the sound their swords make when slicing people's throats. There's too much weird shit going on in The Warrior's Way to discuss in one review.

Seinfeld popularized the phrase "unbridled enthusiasm" so that fifteen years later, critics like me would be able to properly describe this movie. There isn't an original thought in the thing's head, the special effects are silly-looking, some of the fight choreography is sloppy and half the cast hams it up like deli meat is going out of style. However, there's an enthusiasm about the film that's downright infectious. It's the kind of movie about which drunk people like to say "If you hate this, then you hate fun!" While it's not the kind of comedy where jokes fly every ten seconds, it has a very giddy sense about itself. I was grinning like a moron for most of the film's 100 minutes, not because of my lifelong dream of seeing cowboys fight ninjas, but because the movie is so eager to please that I found myself loving it in spite of myself.

But let's look at it realistically for a second here. This is the feature debut for South Korean director Sngmoo Lee. It was filmed almost entirely on a sound stage in New Zealand with Hollywood actors and a Korean action star. The concept and the go-for-broke attitude are really all this little movie has to make it stand out. That it's miraculously being released this week against practically nothing (unless you're one of the lucky bastards who gets to see Black Swan early) is the only reason it has a chance to make any money.

I don't want to turn The Warrior's Way into The Little Action Movie That Could, but it certainly deserves it. I just can't bring myself to say anything harsh about it. The plot is cobbled together with chewing gum and Band-Aids, and the action is really only going to please those who don't mind seeing a whole army of ninjas mowed down by a shoulder-mounted machine gun. It's an idiotic idea for a movie, and yet at every turn the movie seems to realize this. There's a very specific market for gung-ho weirdness like this, and I'm sure somewhere in Hollywood there's a bell curve with my face glued square in the middle.

MINORITY REPORT: This whole thing reminds me of the time I spent with a clan of murderous ninjas as we attacked a small town of plucky cowboys. We fought tooth and nail to defend our town from those evil ninjas until we... wait, no. Did I say I was the ninjas? I think I was the cowboys. Yes, and we massacred those damn yokels to the last man, me and my ninja brethren. It was a very confusing time. - Montague "Legally Sane" Smythe