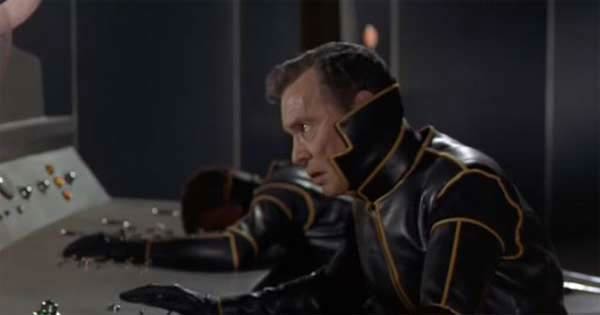 I have a special place in my cold dead heart for old science fiction. I don't watch it that often, but I do love the imagery and attitudes that come through in the old sci-fi movies. The inept technical jargon, the spirited over-acting, and the crazy sets all come together to create some ridiculous notion of the future that's both amazing and comical at the same time. "Planet of the Vampires" is an awful movie I like a lot that exemplifies this. The technical jargon is so ridiculous that it borders on hilarious, and the crazy costumes are quite simply radical. I hope we all dress in black jumpsuits with oversized collars in the future.

I started thinking about how a sci-fi adventure gets put together in these strange futures. I imagine there is a newspaper somewhere with tons of want ads from aspiring space adventurers, looking for like minded individuals to join in on a wild sojourn into space. So that's where I started. It's a lot shorter than most articles, but I didn't want to overdo it. I wanted it to be kind of brief and mysterious and not so much funny as "wahhhhhhhh?" I'm not sure if that qualifies as an accurate description of anything, though.

Chances are I'll find out this joke was done years ago on Futurama or some damn show I don't watch!

I didn't even write that update!

Some of you know that I am the kind of jerk who enjoys a good comic book. I don't read that many and I rarely set foot inside a comic book store because I fear being judged by the storeowners and regular customers. The way their eyes fix on me, the way they welcome me as a customer, it all seems like some sort of elaborate plot to expose me as a nerd when I'd rather just hide it and feel superior up until the point I cry myself to sleep thinking about Silver Surfer's traumatic life.

I'm one of those bastards who only buys trade paperbacks, making me a pariah to typical comic readers. But fuck it, I don't want my room filled up with dozens of single issues I then have to polybag and box up. I did that when I was younger, and I ended up with 500 comics, 3 of which increased in value and are now worth roughly what the average comic book costs today. I'm still a typical comic nerd in that I collect comics based on the writers/artists. But I seriously hate serialized stories. I'd rather creators spent a year in hiding and completed an entire story arc all at once rather than string us along 23 pages at a time for years on end. But that's what the entire industry is based around and has been for many decades, so blah.

Case in point, I picked up Warren Ellis' new comic Desolation Jones, which started great with a beautifully illustrated plot based around stolen Hitler porn. But the damn thing is "Part 1 of 6" and the comic comes out every other month. So this one single self-contained story that will equal about 138 pages total will take over a year to read. What the hell? Meanwhile, over the next year Warren Ellis will update his LiveJournal about 365 times, fawning over a different camwhore each time. There's no justice in this cruel world. Also, it's probably going to take another 3 years just to wrap up the last few issues of the excellent Planetary, although that's mostly because Joss Whedon stole the artist for his X-Men comic, which may or may not feature vampires and lesbian witches. Even if it does, that's still a step up from a Cajun jackass throwing exploding cards at people. Anyway, the point is, I can either be strung on for a year knowing a comic I enjoy is out in tiny portions, or not read a series I'm interested in for a whole goddamn year just so I can avoid being routinely cliffhung by the story. I think I'll do that and hope the series doesn't get cancelled halfway through due to poor sales from people waiting for the trade paperback. This is a horrible dilemma, not unlike the serious issues facing our modern world, such as war and untreated head lice.

Sleeper wrapped up last month, and I must say it was one of the best superhero comics I've ever read. I got kind of tired of the whole superhero thing, but it was an excellent twist on the old cliché, and included very little in the way of spandex. Instead, it was a gritty, noir-esque espionage thriller with great writing, fantastic art, some wacky super powers, and lots of violence. The entire series is basically 24 issues, spanned over two 12-issue seasons. There's also a prequel, but it's not that important. I think the fourth and final volume will be out in trade paperback format before long if you want to pick up the entire series on the absurd recommendation of a random Internet idiot. I give it 8 out of 10 stars and maybe a clover for including a villain who gained her powers after getting bitten by a radioactive homosexual. Apparently about ten people read this series, which is a shame, because it was way better than 90% of the comics made in the last few years.

I think I've gotten completely bored with Y – The Last Man, which I thought started out good, albeit a bit soap opera-like. Now it just bores me to death and I've lost all interest in the story. I don't even care what killed half the population or why. On the other hand, Ex Machina, also written by the same guy, has been entertaining me very much. I hope it doesn't die out towards the middle like Y has. It's a fun mixture of politics and "realistic superhero adventure" with a spooky alien plot thrown in the background, kind of like the X-Files before it turned out that the aliens were actually some other aliens and that the aliens you thought they were were actually just clones of super soldiers developed by the government, which in turn was working for aliens, but not the aliens you thought!

If you're like most Americans and enjoy a good zombie yarn, The Walking Dead has lots of zombies and lots of people getting bitten in the face by zombies. I like zombies and I like seeing zombies bite people, so it's a great comic book all around.

Okay that was fun! I'm done talking about comics for now!

Livestock: Moof, do you have anything you want to say to the readers this week?

Moof: Watch out for clouds.

Moof: That is it.

Livestock: Okay, do you want to clarify that any?

Moof: Mostly dark ones but ones that look like sheep as well.