TSR's 1984 Marvel Super Heroes combined recognized heroes from Marvel comics with a willfully difficult rules system that hid numerical statistics underneath adjectives. Sound like a good comic book idea? Which is better: Amazing strength, Monstrous strength, Remarkable strength, or Incredible strength? Creating your own hero could be a laborious process of random tables that might result in nonsensical creations like shrinking cyborgs with superhuman swimming ability. Well, maybe...after a terrible dog paddling accident Navy SEAL Johnny Rushmore was brought to a secret Navy cyborg lab at Annapolis. After weeks of surgeries Minisub was created by the Navy to swim into the engine snorkels of Russian submarines and dismantle their battery rooms, but he escaped from the Annapolis Cyborg Depot. Now he's trying to discover his past as he fights evil with W.E.E., the all-tiny super hero team. Forget everything I said. Marvel Super Heroes is the best. That's why we're giving detailed coverage to all four volumes of the Gamer's Handbooks or, if you prefer, Marvel Super Heroes' Monster Manuals. 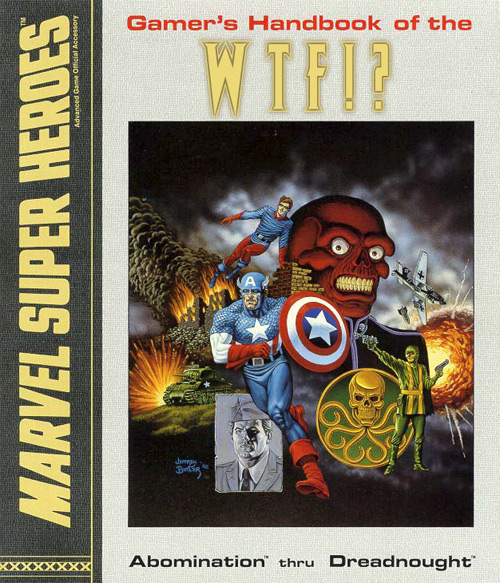 Steve: Bro, is this the article where we hand out the awards for sweetest book cover ever in history?

Zack: Abomination thru Dreadnought is what I had planned for my epitaph. Now people will think it's a reference to Marvel Super Heroes.

Steve: I figure by the time I die grave technology will be awesome and people who visit my grave will be able to fight a hologram of me. Like a full Avatar 3D Steve with ninja moves.

Zack: By the time I die my head is just going to be a crimson skull and a couple of bug eyes.

Steve: I wonder if Red Skull had a little Nazi henchdude that followed him around all the time blasting saline in his eyeballs. I mean, no blinking and no eyelids is gonna lead to serious shriveled eye syndrome.

Zack: Not to mentioned he'd have a wicked case of spider nostril.

Steve: No doubt. Some wolf spider would be running out grabbing at the saline bottle trying to drag it back to Red Skull's sinuses and lay its eggs in it.