A Guide to Understanding TV Metrics

Over the years, a clear scale of mass has developed. Unfortunately, it is also frequently muddled up with unnecessary volume measurements or even used as a distance measurement by lazy TV writers. Today we will attempt to straighten things out. Remember that this is not a measurement of volume and volume should only be measured sparingly as it is a confusing concept.

The adult man. The great equalizer. God's scale. Oddly, this standard unit of measurement has become increasingly obsolete as the weight of men has increased. It should be noted that the standard Man unit is equal to one 1957 American male. Current and irregular Man units range up to nearly the size of increment two on this scale, which will only confound attempts to make use of these figures.

Example: The XV-43 operates entirely on used diapers, folds down for storage and weighs no more than a man. It's the perfect deep fryer to take camping, next on Beyond Tomorrow.

Hitler's dream pays dividends anew with this useful metric. Just when you thought the last of these rusted shit heaps had been towed off to a junkyard that smells suspiciously of patchouli, they find a new use on TV! You could substitute in another compact car, but the VW Beetle is probably the most widely recognized automobile. Besides, what other car gives you tacit permission to physically assault someone simply by being visible? Thanks, Hitler!

Example: Each of the moai of Easter Island weighs more than a Volkswagen.

When it comes to describing the immense weight of whales and dinosaurs, sometimes a VW Bug just won't do the trick. Enter the African Elephant, which is much heavier than a VW Bug and can also be neatly multiplied to construct any dinosaur or aquatic mammal.

Example: The early Jurassic saw the rise of a new breed of predator, armed with razor-sharp claws that struck with the force of a .357 Magnum, capable of leaping from home plate to the outfield of a baseball diamond in a single lightning attack, yet heavier than three African Elephants.

Semi trucks are commonly used to describe machinery and vehicles that are lighter than the Titanic. Occasionally the term "jumbo jet" is used. If you hear "jumbo jet" you should immediately assume they mean three semi trucks.

Example: The tunneling tool consisted of a carbonized drill mounted on caterpillar treads that weighed as much as ten semi trucks. By the end of the decade, the six tunnel crawlers had excavated enough earth to construct a new Mount Rushmore.

The supposedly unsinkable behemoth of the high seas has become a symbol for giganticness. Heck, its name is synonymous with being big and heavy. It should come as no surprise that this enduring image of hugeness has become one of the most popular high-end mass metrics. Buildings and large amounts of material are often compared to the Titanic, as well as the expected comparisons to various ships old and new.

Example: The newest aircraft carrier is the USS Fatty Arbuckle, which weighs in at nearly twice the mass of the Titanic and has enough landing deck to allow six entire football teams to land on three jumbo jets and then get out and play three football games at once.

Example: To test this myth, Jamie and Adam will have to launch the bowling ball out of the exploding toilet and hit Buster directly in the sensor in his groin with a force equal to a sledgehammer.

The deadliest jaws in nature snap shut with the force of one of mankind's most powerful hand cannons. Alligators, great white sharks and polar bears all unknowingly wield the might of the .357 Magnum.

Example: If that raptor's jaws snap shut on Mugluk's leg, it will be like getting shot with a .357 Magnum and he'll be lucky to survive.

The most useful metric in the energy scale is also closely linked to a real-world measurement for explosive potential. Anyone who has ever seen a Yosemite Sam cartoon knows just how deadly dynamite can be, so imagine the force five, ten or a hundred sticks of dynamite can pack. This metric is used nearly everywhere.

Example: Unaware of the danger beneath them, the firefighters continued to try to extinguish that chemical fire. Then, to the horror of onlookers, the chemical tank detonated with the force of 70 sticks of dynamite. Amazingly, the firefighters all survived with just a few minor de-limbings.

Don't let the citizens of Hiroshima know this, but their city became a form of measuring explosions the day it was nearly blown off the map. They've recovered nicely all things considered, but that doesn't stop us from comparing everything from larger atomic bombs to meteor impacts and earthquakes to Hiroshima. Also, apparently over the intervening years Hiroshima has become really wussy and pretty much nothing is less powerful than Hiroshima.

Example: If that killer meteor were to hit New York City, it would strike with a force equal to 500 Hiroshimas. If turned on end, the devastated region would be more than fifty times taller than Mount Everest. 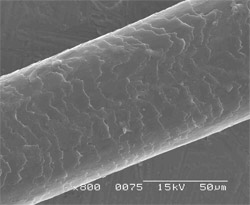 As small as it gets. Macro

Measurements that are macro are usually being done on a cosmic scale. The most common units of measurement for macro are "the earth" and "the sun", both of which are frequently compared to other planets, stars and even each other. Once things gets into galaxies and black holes and bending space and time you might as well forget it. No one can really know how big a galaxy is; our telescopes just aren't large enough to see all of it. Just turn off the TV and hope they put down the bong and reel it in a little bit next time.

Micro measurements are actually quite common, but their usage is ill-defined. Some examples of micro measurements would be a grain of sand, the period at the end of a sentence, the tip of a pencil, the tip of a needle, a grain of rice and a human hair. A human hair is invariably the smallest (and is often found represented as a fraction), but the others are sometimes interchangeable and sometimes simply confusing. A grain of sand is smaller than a grain of rice, but is it smaller than the tip of a pencil? Your best bet in these circumstances is to find the lowest common denominator between the two and convert.

I hope that you have found this study of TV Metrics useful and enlightening. In the future we may have computers the size of football fields that can do our TV metric calculations for us. Until then, we have to rely on the computer in our heads and attack those tough equations with the force of ten Hiroshimas.