In the meantime, Park Ranger Gordon, a happy-go-lucky imbecile with a mustache which is trying to overthrow the rest of his face, is tracking a UFO which he mistakes for a meteor that is somehow saucer shaped, glowing, and constantly changing directions across the sky. Gordon comes across a circular indent in the ground that is supposed to have been caused by a parked UFO, but it actually just looks as if the director left a kiddie pool sitting there overnight. Although the UFO seems large in the sky, the indent in the grass is about 10 feet wide which makes me wonder about the shapeshifting abilities our visitors from the sky may have. Ranger Gordon eventually decides to call for backup, or maybe loses interest in the whole "alien" thing, so he goes back into his Jeep. That's when the aliens attack him by poking him in the cheek with a car antenna (which turns out to be fatal). 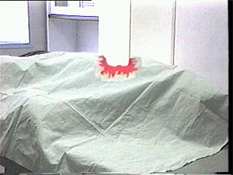 There is no reason for this scene. Can it even be considered a "special" effect?

Now let me talk about the "aliens" in this film. I can easily say, without a doubt, that these are the worst, most idiotic, fake creatures ever built. They move around the screen like Muppets on steroids, bobbing and flopping their rubbery heads with every step. The props in this train wreck of a film are about as convincing as the paper boulders from the "Hercules" movies from the 1950's. The "aliens" attack via somebody throwing them across the screen or pulling the fishing strings that control their arms. If I saw one of these things in real life, I would die of laughter before I died from it spitting a healthy dose of acid into my face.

One of the Johns (I can't remember which) invites a horribly disfigured woman named Michelle at a gas station to come and party with them at the woods later that night. She leaves for home and calls her girlfriend Donna, some lady who closely resembles Peggy Hill from "King of the Hill". They engage in the most pathetic bit of acting / dialogue I've ever witnessed with my two filthy eyes. If there was any God in the universe, he would allow me to get in a car accident and damage the part of my brain which remembers this awful, awful scene. Alas, this is not possible, so the best I can do is let you download and view the film yourself. "Spread the Misery", that's my motto. After talking to her friend, Donna walks into her garage in order to be attacked and killed by an alien that was hiding in a wicker basket. It must have been on sale at Pier One.

Michelle comes over a few hundred thousand million hours later and is immediately jumped by the same bastard alien. Being a trained and skilled warrior in hand-to-hand combat, she is able to dispatch of this ultra-intelligent predator by stepping on its head. Much to her chagrin, the alien had a backup buddy who is tossed in her general vicinity. By thinking quickly and picking up some matches and a spray paint can, she is able to create a makeshift flamethrower and burn it to a crisp. This encounter leaves our heroine upset and unsettled, so she puts her hand over her mouth, gets in her car, and leaves the movie. Yup, she actually drives out of the movie, never to be seen again. Her character just disappears from that point. 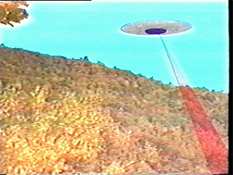 Run away, the dinner plates are shooting disco beams!

Back to the Johns. Their car "mysteriously" breaks down, so they decide to run as fast as they can in a direction chosen at random. We're treated to another marathon of stock footage from the woods, then the aliens try to kill a John by spitting acid on him. They react by smashing it with a rock and running to an abandoned house in the middle of a field.

However, this house isn't safe at all. The aliens cut the electricity, and the Johns have to explore the insides of the place with flashlights and candles. Eventually a UFO comes and zaps one of the Johns, who gets probed, poked, and cloned. An epic battle of dorkiness takes place, with the two John clones fighting each other for the title of "Biggest Waste of Flesh". The other, non-cloned Jon gets tired of watching "Geek Arena" so he kills one of them with a scythe, the perfect anti-clone weapon. Jon is then surrounded by "hundreds of" aliens, which is just a series of shots depicting one alien from different angles. He does the only damn thing he is used to doing; he runs away. Suddenly there's some stock footage of buildings in downtown cities collapsing, and UFO pictures are superimposed over the Earth. Jon looks to the heavens, aware of his impending destruction, and cries out in fury and rage at the inevitable alien overthrow. The movie cuts to black, and then I scream at the heavens for producing something this unholy.

Even if this film had a new director, cast, budget, script, plot, and special effects, it would still suck. If you were to place this movie within 50 feet of a really good video, it would actually create a suck vacuum that would cause the other film to become unbelievably shitty. I cannot offer a single good point about this video, everything in it is an embarrassment to the human race and life in general. I cannot blame aliens for wanting to decimate Earth if crap like this can exist on it.