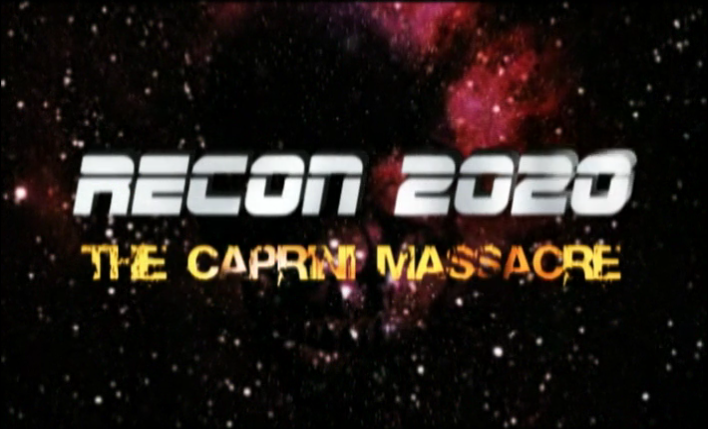 Overview: There's some kind of piecemeal story about aliens, cyborgs, and monsters, but let's be honest, this is just a 90-minute instructional video on paintball tactics, and not good ones either.

The Case For: Memorizing all of the fake military jargon will really help you impress the spastic 12-year-olds that you meet playing Call of Duty online.

The Case Against: The combination of heroically bad acting, constant yellow-light filters, and crackling walkie-talkie dialogue will probably render you blind, deaf, and generally unable to interact with other humans.

What do a crumbling factory building, an elite squad of space marines, a hoard of kung fu zombie insurgents and a CGI dinosaur have in common? Well, nothing. But that certainly didn't stop writer/director Christian Viel from putting them all together in the non-stop action-fest known as Recon 2020: The Caprini Massacre, a movie that (as far as we can tell) was bankrolled by a hyperactive eight-year-old millionaire who did his storyboarding using crayon drawings and dramatic re-enactments by way of smashing random toys together. Tasked with acting out this epic plot is a group of actors whose average number of chromosomes probably hovers around 23.

The movie starts, as many do, with the opening credits. Normally this wouldn't be an event worth writing about, but Recon 2020 really distinguishes itself with the level of comedic failure it manages to pack into its credits. We begin with the inevitable scrolling space text, a heady tale of alien invasions and anal probing, before settling in to the actual list of credits, which wasn't interesting enough so Christian Viel elected to make all the letters jitter and flash around until they're almost unreadable. That was still boring, so he spliced in some old newsroom footage of the L.A. riots between every other name. Top billing goes to Anderson Bradshaw, who stars as the larger-than-life Sergeant Sharpe, although he maybe should have double-checked that his magnum opus spelled his name correctly in the credits.

Now, it's a well-established rule that any movie with nudity in the opening scene is an obvious trap, meant to string unsuspecting viewers along through the oncoming parade of dumbass CGI monsters and camera effects with the promise of future nipples-to-come. Recon 2020 takes this formula a step further, starting with an extreme close-up of said nipple and then zooming out to a pair of unwashed space bums awkwardly fucking away in front of a green screen backdrop so crappy it could pass for a Windows 95 screen saver. All of this should be setting off more alarm bells in your head than a molotov cocktail in a meth lab. 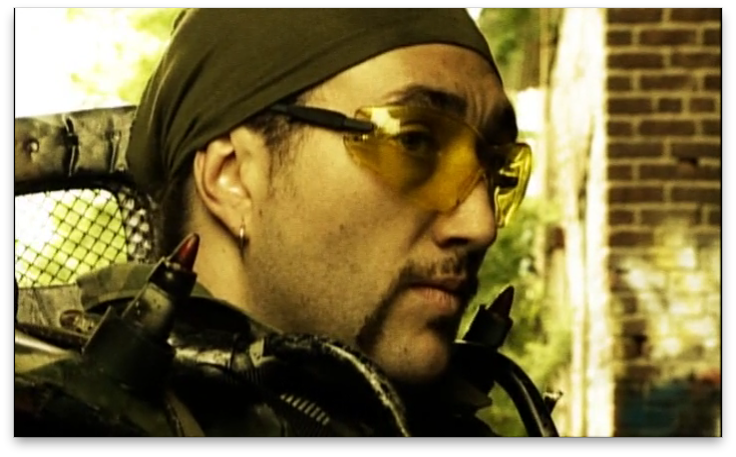 "Boy, I sure am tired of all these Caprini Massacres."Assuming you're unwise enough to keep watching the movie after such an obvious warning, you'll finally be introduced to the illustrious Sgt. Sharpe, who establishes the plot the easy way: by explaining it to us as part of a briefing for his elite marine unit. You can tell they're elite because they get all the best combat equipment, i.e. fifty pounds of plastic paintball armor, hand-me-down lacrosse gear, and old Christmas lights. Sharpe explains that their mission involves re-establishing contact with a colony that may or may not have been attacked by aliens, and also that the writers of this movie totally aren't ripping off Aliens, and that they probably haven't even seen that movie anyway, whatever it is. The briefing culminates in what is probably the best set of metaphors ever conceived:

SGT. SHARPE: Now, intel's about as good as last year's horoscope, and we all know what that means: We have no idea what we're going up against and who we're going to fight. In other words, we're walking into a nest of vipers covered in dog shit. Meaning...we're gonna have to be ready to get outta there faster than a half-fucked fox in a forest fire!

Properly motivated by that baffling set of mental images, the elite marine squad exits its abandoned toolshed/high-tech military HQ - in slow motion, because why the fuck not? And so we're whisked away to planet Caprini in the Massacre system, or wherever the hell they're supposed to be. It looks more like planet Abandoned Industrial Park in the Sepia-tone system to us, but hey, suspension of disbelief etc. etc. The marines run into a little girl/zombie standing completely still, which is obviously an extreme threat requiring the use of X-ray bullet-time: