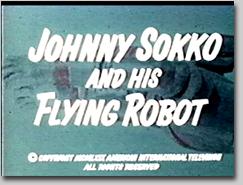 Overview: A boy and his robot fight off crappy effects and no budget in order to ensure peace on planet Earth. Their chief weapons are weak plots, having twice as many characters as actors, and little finger missiles.

The Case For: I laughed my ass off. It's some of the worst, most inexplicable footage ever created. Why does this exist? I'll leave that open to debate (here's a hint: narcotics).

The Case Against: After I saw it, I went home and cried for three hours fully clothed in the shower, twitching, unaware of my surroundings. The main problem with this series is that once it's in your head, you can't get it out. Eventually, after several viewings, your mouth doesn't match up with your words anymore and you realize how poorly written your own life might actually be. 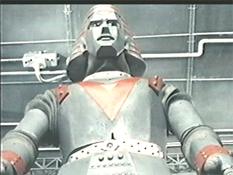 This is the aforementioned "Flying Robot". We believe they built his head from the Sphinx.

You ever hear Britney Spears on the radio, think how awful she is, and then wonder why you're unavoidably force fed such crap all the time? Well here's a sobering thought - try to imagine the "artist" that makes Britney seem like a genius. You can't, can you?

It's with that thought in mind I take to reviewing the infamous "Johnny Sokko and His Flying Robot", a Japanese television series that, God help me, makes "The Mighty Morphin Power Rangers" look like it was directed by brain surgeons. "Johnny Sokko" is obviously a very influential predecessor to MMPR, but it's wild what a few years of TV technology will do for you in the "Let's Try Not to Seem Like Total Idiots" department. The effects in this show are less convincing than Tonya Harding helping the homeless, the "UFO" in this movie is some sort of pie-tin covered in green and red paint, objects change size all the time in relationship to each other, people keep dying and reappearing throughout the show, there are huge gaps in the plot, and large amounts of time go unaccounted for. And I noticed all this in just the first five minutes of the show.

The "plot" is this: there's a group of good guys, the Unicorn Organization, and a group of bad guys, the Gargoyle Gang. Both are woefully inept and at the mercy of a nine-year old Japanese boy that wears the requisite tiny shorts and pulled up kneesocks. There's a squid guy from outer space who kind of does something evil each episode by supplying the super monster (which isn't really "super"). In episode one it was a sea creature and in episode two it was a flying bowling ball with spikes. You get the picture. Johnny has to combat these "monsters" by bossing around his Flying Robot, who is too stupid to disobey orders and smash the moronic kid like a bug on a windsheild. 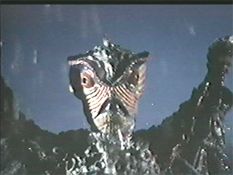 This is one of the super monsters. His face was put together in under four minutes.

Johnny controls The Flying Robot through his wrist watch, which contains all sorts of little coils and springs on the inside, making it as "high tech" as an acorn. He says things like "Giant Robot obey - atomic punch - all your might!" at which point the robot sort of slowly slings his arm around towards the bad guy. Luckily the enemies have the raw speed of a dishwashing machine, so they usually end up getting smacked around. The robot itself is a five foot tall guy in a rubber suit who randomly strikes fruity martial arts poses before doing anything (they like to throw out little hints just in case you can't remember the robot is from Japan). I guess it's every young boy's dream to have a giant super friend who obeys his every command and can destroy cities and monsters and toy boats. A friend who is not just a friend, but more an extension of himself. An extension that compensates for some insecurity he hasn't yet pinpointed, but which causes him to fight other boys and get embarrassed around girls. For Japanese boys in the 60's it was a giant robot fighting bad guys, and for Japanese boys in the 90's it was a thousand giant phalluses destroying Neo-Tokyo and ending civilization. Keep an eye on Japan in the next decade for their newest hero, "Louie Boner and His Destructive Penis Cock".

Johnny's best friend is Jerry Mano, a young secret agent whose special skill seems to be getting caught and telling Johnny to run away. When the good boat "Merry" was under attack from a giant sea monster, his strategy was to jump into the sea towards the monster and thus, somehow, towards safety. In all fairness though, he does have the best lines and he can mow down several bad guys with a single bullet. He can also dodge machinegun fire and only needs a slight declination in the earth to use for protection against a hail of enemy shrapnel. Jerry is a "secret" agent for Unicorn (the word "secret" meaning "he routinely screws up and publicly states to nine year old boys that he works for them"), which has one of the goofiest salutes in moviemaking history. 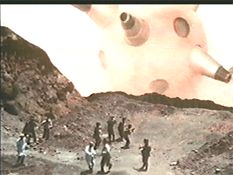 This is another super monster, about to squash some Japanese men. I think.

I feel bad for Johnny though. He really believes the Unicorn Organization wants to be his friend when the truth is they don't give a shit about little Johnny, they just use him for his robot. Think about it: if a nine-year-old kid controlled the most powerful weapon in the world, we'd all be working in the candy mines or harvesting Pepsi plants. If Johnny ever tried to solve a case on his own it would be like Michael J. Fox (not Michael D. Fox) refusing to turn into Teen Wolf during the big game just so he could win by being himself. Sure, he'd win because he's the star, but who would believe it? Not this savvy TV watcher, Champy!

The greatest skill the makers of "Johnny Sokko" possess is the capability to create a scene by using four or five different "mediums" in a single sequence. For example, a battle scene between the worthless Japanese army and Nucleon the Bowling Ball might go as follows: Bowling Ball rolls across model of open field. Cut to stock footage of tanks in the desert. Cut to two inch models of tanks in open field getting rolled over by Bowling Ball. Cut to cartoon of explosion. Cut to human in a Giant Flying Robot suit who punches ball, which is somehow in midair and now has little prongs. Cut to the same Bowling Ball carrying away a 10-inch tall Giant Robot doll.

There are very few details in "Sokko World", but then again, there are very few details in most young boys' imaginations. I am too young for Johnny Sokko and too old for Power Rangers, but I understand this much: as long as the robot looks cool (for that time period), gets a chance to show off his powers every now and then, and the main hero leads an extraordinary life his parents don't know about, you have a winner on your hands. Especially if your hands shoot little missiles. So all you yokels in TV-land out there looking to make a fast buck, you have your mission laid out before you.

However, before we get too sentimental, let us not forget why Johnny Sokko was brought to this site; the bottom line is it's puke and it will leave you feeling hollow and sad despite the tremendous amount of laughter it will generate. There's less coherency and meaning than Britney Spears video, and, unless you count the sea monsters, less nudity too. I know you'll all be in a rush to get your hands on a copy of Johnny Sokko now, and it is a good time. But before you do, ask yourself what the purpose of your life is, and whether you want this crap taking up space in your cerebral cortex when you're on your death bed. If the answer is yes, then Johnny Sokko is for you!